Removing the fuel tank and transaxle

The last major piece of the car that is taking up space and weight is the fuel tank.  Some of the batteries will eventually reside here so it's gotta go.  I pull out my Haynes manual for help on how to take it out.  Step 1: remove the transaxle...crap!  Unfortunately, the fuel tank is situated right above the transaxle and just below the floor of the trunk.  I considered cutting it out, but it's full of fuel vapors so that's not going to work either.  After contemplating this for 3-4 weeks I bite the bullet and go to work.

Being a rear mounted manual transmission, there is some linkage going from the shifter to the back of the car.  This all has to be disconnected and removed.  I was mostly worried about that, but it turned out to be the simplest part of the project. 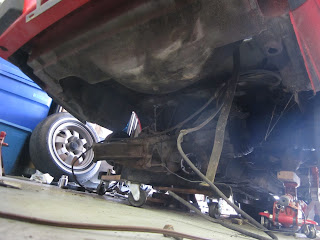 The fuel tank was a bit stubborn as well, but no where near as bad as the transmission was.  There are two straps that hold it in and are easy to take off.  You also have to disconnect the fuel sending unit wires that are accessible through a panel in the trunk floor.  I got all that disconnected, and the next step in the instructions is to just remove it, but it's a little stubborn.  It's kinds of wedged between this crossbar that the transaxle hangs off of and the trunk floor.  There's foam that kind of locks it into place and it wasn't clear how to slip it out.  Eventually I just pulled really hard on the back side and it just popped out.  Not that it matters to me, but it doesn't seem like anything was damaged in the process, so I assume that's how it's supposed to come out.  Now I can see how oddly shaped it really is. 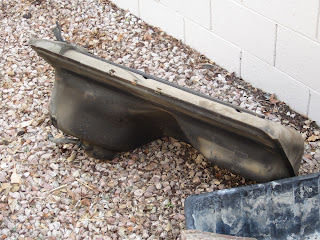 Reconnecting the transmission was no simple task either.  I thought that I now had the mechanics all figured out it would go relatively smoothly, but it took just as long to hook up as it did to take off.  12 hours in 5 days of working on it plus a bonus bandaged hand and the fuel tank is out and transmission back and hooked up.  Hopefully it works correctly when the car is moving again.  An additional bonus to this job is the CV joins were likely contaminated with grime in the process, so I plan to disassemble the axle assemblies to clean and regrease them some other day.
Posted by Micah at 11:44 AM