Where's it all gonna go?

This post is mostly about me looking at piles of parts wondering how it's all gonna go together, but we're gonna get started with the latest news on the war...

I'm making major progress in the war with the black widows but I'm not sure if it's over.  I killed 12  of them and one egg sac with brake cleaner a stick and one brick, but that was getting me nowhere.  So two days ago I cleared out all the webs and soaked the car with Suspend SC (designed to kill scorpions - yeah, been there).  The next morning, no new webs, though this evening I was taking a closer look and found a few hidden ones.  I'm hoping I just missed those during the initial sweep, but if they're back tomorrow it's time for another round of spray.  Enough with the critters, let's see some pictures!

I finished the duct that feeds air from the blower fan into the motor and it looks sweet!  Check out that rivet job!  The motor will be keeping cool just in time for the cool weather... 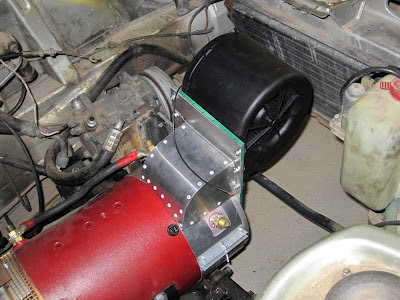 Ok, now I've hit a major decision point.  I have a massive and growing pile of boxes of stuff that's gonna go in the car, but just about all of it can fit in the left over nooks and crannies.  It's time to decide where to put the batteries.  I mentioned it before, but there is a new variant of the CALB cell that came on the market a few months back.  Supposed to be better efficiency, lower voltage sag, more cycle life, more more more better.  It's all perfect except they don't come in the cell size I was planning on.  But they have one close, so I think I'm going to opt for the higher pack voltage.  The components in the power section are rated for 600 volts and my pack should have a max charge of 3.65 x 70 = 255 volts.  Should be plenty of headroom for any spikes.  The only thing I have to keep an eye on is to make sure the voltage at the motor is less than 170 volts at all times.  I've got a plan for that, so let's do it!

Ok, so where are they gonna go?  Let's start with weight.  Each cell is about 2 kg, so the full pack will weigh 140 kg or 309 lb.  Interesting enough, the "equivalent" pack of the other cells was supposed to be 340 lb, so maybe these cells are lighter per kWh that the others?  Way back when I took everything out, I weighed it all so I'd know how much needed to go back in to get the distribution right.  It turns out I need about 120-130 lb of batteries under the hood to match the old weight.  That comes out to 40% of the pack, or 28 cells.  Yikes, that's a lot to fit in there!  Time to see where they're gonna fit.  After a LOT of measuring, I think I have an answer.  I made some cardboard boxes that are as close as possible to the actual size of the motor controller and the batteries and dropped them in place.  I should just be able to close the hood with these 9 inch tall batteries above the motor. 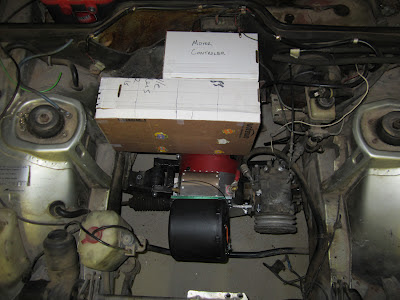 I think there's actually enough room for another row here, so I can probably fit a block of 16 on top.  Then if I take the end row (on the left in the upper picture or closest to you in the lower picture) I can fit another 4 toward the front of the car for a total of 20.  If I move the motor controller somewhere else, I can fit at least 24 batteries above the motor, but then where does the controller go?  It can go on the driver's side of the blower fan, but it doesn't fit that well over there.  It could also go where the battery currently is (upper left in the upper picture). 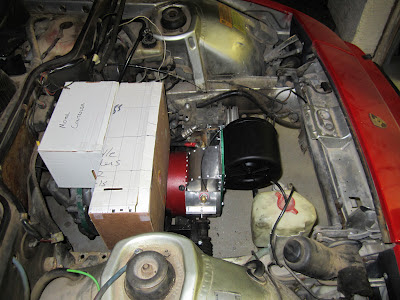 Another potential spot for the batteries is between the motor and A/C condenser, but then you have even hotter air blowing on those cells in the summer.  Gah!!! so many options!  I think I'm gonna need more cardboard!

My head hurts, let's talk about something else.  I've compiled a huge pile of stuff to build the motor controller, and here they are! 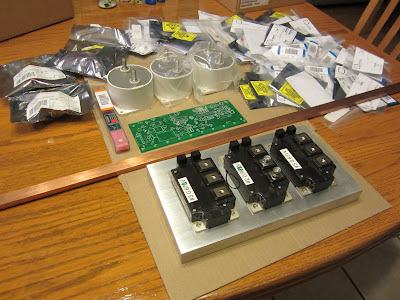 In the front you can see the 6 x 10 x 1 inch block of aluminum that my friend, Steve, will hopefully mill into a water plate in the next week.  On top of that are the three 400 amp IGBTs.  Behind them you can see the 3/4 x 3/8 x 42 inch bar of copper for the bus bars.  Next is the printed circuit board (PCB) that I bought from Paul and Sabrina's store.  Behind that are the three whopping 150 uF film capacitors (most expensive parts in this picture).  Then all around you can see scattered the over 100 parts that will be soldered to the PCB and the IGBT driver boards (not shown).  My goal is to have all these pieces 90% assembled by two weeks from now.  Wish me luck!
Posted by Micah at 9:43 PM