On the forum where the control board I'm using was developed, there are quite a few stories of people doing very bad things to their car because they didn't properly test their controller before hooking it up.  One guy even instantly destroyed 1000's of dollars worth of batteries because things weren't set up right.  I'm trying to avoid that with a lot of small steps as I test it.

Of course, that doesn't mean I don't have a touch of redneck to my setup.  I've gotta make sure this isn't what it looks like when it's hooked up in the car. 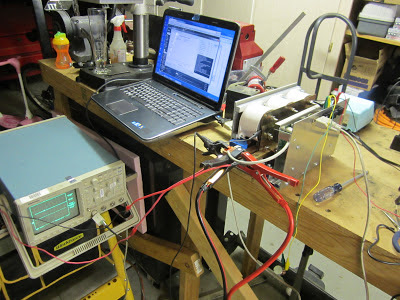 I started off hooking up a very small 12v lead acid battery and a small motor used for starting RC plane engines.  After getting the motor hooked up the right way it works!  Next step, a 120v DC treadmill motor and a car battery.  Still no smoke!  Now that I'm confident things are working it's time to boost the voltage.  I have a bunch of 3 cell lithium batteries for electric RC planes, so Joe and I string them together to boost the voltage.  One at a time we raise it up until we're out of alligator clips and reach 70 volts.  Still working well! 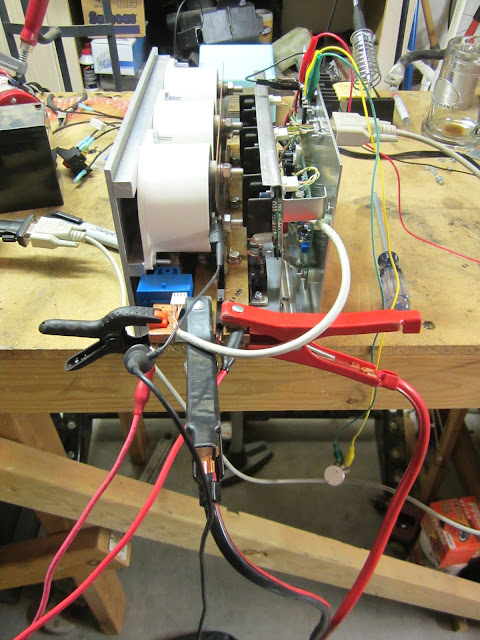 We also checked a few other things along the way.  First, I want to see if all three drivers are turning on and off at the same time.  If one turns on or off before the others, that means for a certain amount of time all the current has to flow through 2 IGBTs instead of just one, or worse, all through one IGBT.  If that happens when I'm commanding 800 amps, something is bound to blow up.  The oscilloscope tells us that all three are synchronized to within about 20 nanoseconds (0.00000002 sec).  I'm going to assume that's good enough.

Next, I want to see how long it takes for the IGBTs to turn on and off.  This is important because the time between the on and off state creates heat. You can adjust this time by changing the gate resistor.  Right now I have 5 ohm resistors for both on and off directions.  If you reduce the resistance, it will draw more current and switch faster, of course, that has its limitations.  The driver can only provide so much current, so you are limited there.  Also, the faster you turn off, the higher the voltage spikes you will see (that's bad).   If memory serves, they currently turn on in 80 ns and turn off in about 150 ns.  The driver provides 15v to turn on and -8 volts to turn off, so that makes sense with the same resistance.

So that brings us to the next thing to look at: how high are the voltage spikes?  All my parts are rated for 600v.  That means the highest battery pack voltage plus any voltage spikes need to be well clear of 600v.  My battery pack will be about 235 volts and I'm seeing 10-15v spikes so far.  Sounds good except I'm only able to drive about 20 amps so far.  The voltage spikes go up with more current and I want to eventually get to 800+ amps.  Unfortunately, I forgot to take some o-scope pictures of this.  We had a fun time trying to get the current higher.  Joe held a block on the output shaft of the motor to try and slow it down.  Almost immediately we smell something burning and freak out.  Luckily (after about 5 minutes of sniffing around) it turned out to be the wood block!

Next step...hook it up to Joe's 150v battery pack in his electric car and try and spin a Warp 9 motor!  But that'll be another day.

All the testing I listed was actually done over two different days.  After the 12 volt tests I was happy enough that I decided to "finalize" the build of the controller a bit more.  I tore it down completely and tin plated the copper parts to keep them from corroding.  Here are some pictures as I put it all back together again.

Here's my awesome water plate.  You can see I've epoxied the thermal sensor in the milled out channel. 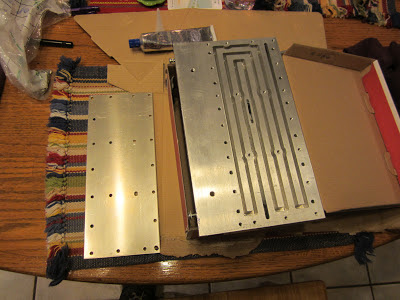 Here's the other side with the thermal probe wire coming out.  Notice all the heat shrink for strain relief. 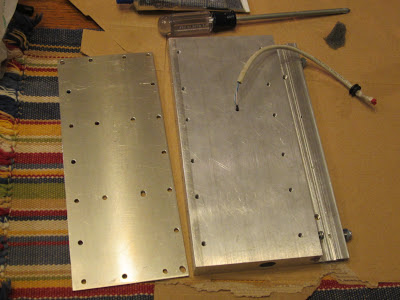 Flipped back over, now I've added some RTV gasket maker.  Please, please, please keep the coolant on the inside! 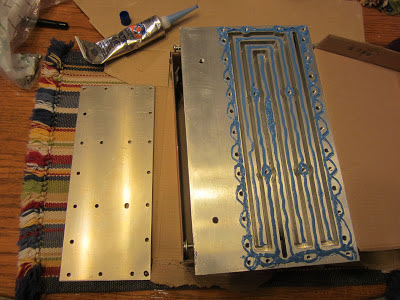 After 20 minutes with a screwdriver I've got 22 screws holding it down.  That's 22 of the over 50 tapped (threaded) holes I put in this thing! 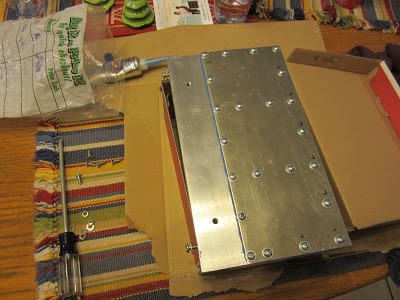 Flipped back over, now we've got thermal grease to keep the IGBTs in good contact with the water plate so it can take the heat away.  (Apologies to my thermodynamics teacher who is crying right now due to the wording of that last statement.) 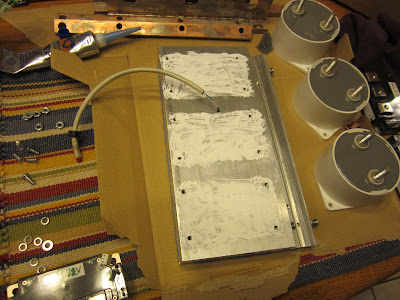 IGBTs are screwed on.  One screw in the upper left corner actually penetrates into the liquid passages because I didn't realize how deep the pipe thread hole would have to be.  To seal that off, I just filled the hole with RTV before putting the screw in.  Hopefully that holds or this puppy will fill with antifreeze! 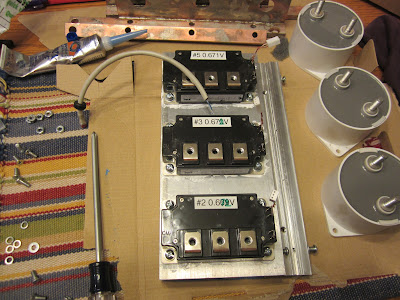 Now I've got the bus bars attached.  See those vertical plates?  Those attach to the capacitors.  Making them flat and close to each other like that's supposed to reduce "stray inductance" which make more (bad) voltage spikes.  Bad voltage spikes!  Now you can see how crappy the tin plating came out.  I think the claims that it covers 600 sq inches was super optimistic.  As a result I've got really splotchy coverage, but I think it'll be fine. 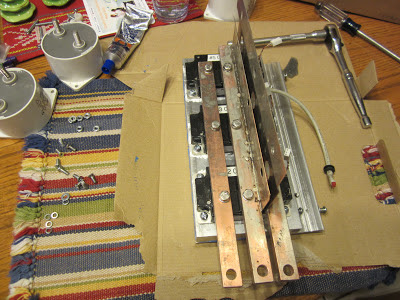 Now I've got those huge capacitors hooked up.  All the bolts, washers, and nuts I used to hook this stuff up was stainless to reduce the risk of corrosion.  To make it worse, they're all metric, so there's probably $20 of fasteners right there!  I didn't keep track, and don't even want to know how much I spent on screws and washers on this controller... 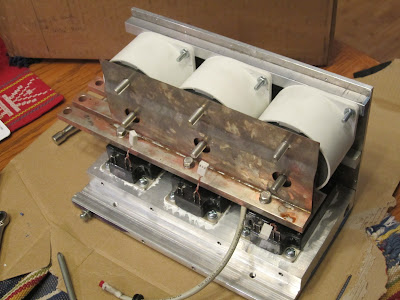 Alright, now we have the IGBT driver board mounted and all the clips hooked up. 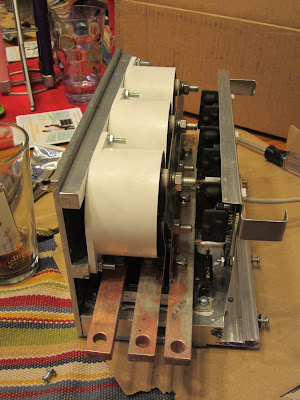 Almost there, but it's time to play Settlers of Catan over Skype with Todd and Amy in Seattle... 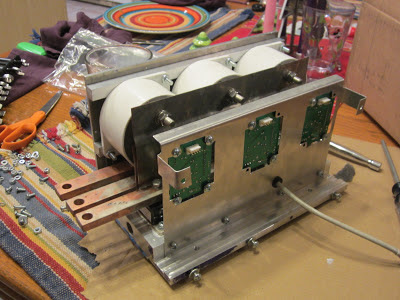 Too much pumpkin porter while playing Settlers, so picking things up the next morning.  Here we've got the Paul and Sabrina control board mounted to the outer wall of the controller.  I omitted the MOSFET driver parts and just tapped into the inverted PWM signal.  Split that three ways and that goes into the IGBT drivers.  Everything plugged in?  Doh, forgot the thermal sensor. 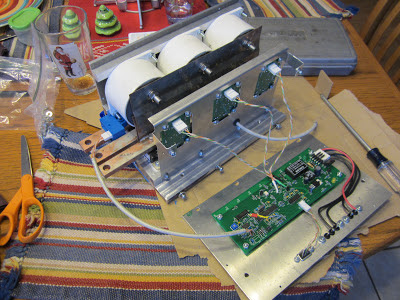 Woo hoo!  All hooked up and screwed together.  Lost of wires in there...hope it all still works! I've already tested it and it does work, so you can rest easy tonight.  And it's done!  I put some nifty labels on the bus bars so I don't hook up the battery wrong and melt down my battery pack.  Thanks dad-in-law for lending me this label maker! 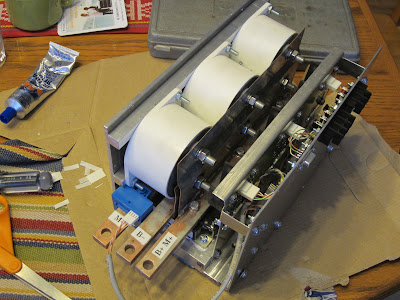 Whew, that's it for today.  Hopefully I'll get a lot done over the Christmas break.  And that reminds me, Merry Christmas!!!
Posted by Micah at 7:15 PM