The car show that was scheduled last week on Wednesday was rained out, but luckily they pushed it to Wednesday this week.  I made it, and here's how I got there! 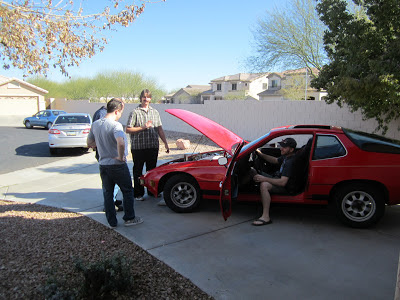 Two days before the show I decided I needed to fix the leaky heater core.  It's been leaking since I first put it in, but it's such a pain to get at I never bothered with it.  Well, since all my coworkers will give be crap about it and I'm tired of washing coolant out of the driveway it's time to get my hands dirty.  A few hours later I've got a paper gasket and some RTV in the flange and it's leak free! 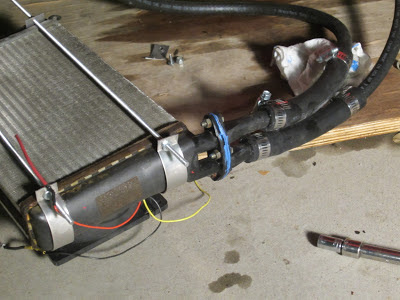 I've driven the car around the neighborhood a bit, but not a whole lot.  The trip meter just rolled over to 0.1 miles.  It's still very sluggish and only seems to get up to about 5 mph (not enough to register on the speedometer).  There is a parameter in the controller that allows you to limit the maximum motor amps, and I'd set that parameter to 1 for initial testing (corresponds to about 104 amps) and later moved it up to 2 before I first drove it.  It seems worthwhile to bump it up to 3.  At 200 amps I figure I have 16 ft-lb of motor torque, and assuming friction, rolling resistance, hills, etc, I can see why that would be pretty slow.  Using the current squared rule, I should get 2.25x the torque by upping the amps to 300.  A friend is coming over with the car trailer soon so I don't have much time to try it out.  Acceleration is noticeably better, but top speed is hardly any better.  The trailer shows up the night before the show and we load the car.  To get up the ramps, my friend actually has to push a little.  Good thing there aren't any hills to climb at work! 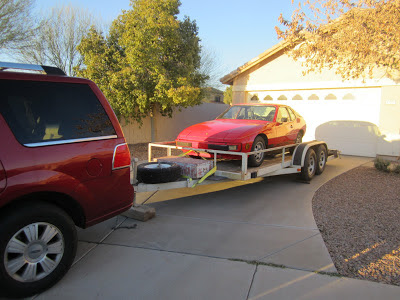 The next day after a restless night, we drive in to work.  We unload the car and drive in (slowly).  Inside the campus there's a long stretch where I manage to accelerate to white knuckle speeds of 9 mph!  Good thing there's a 10 mph speed limit so I can pretend to have an excuse.  When I park the car I already have a crowd forming around me!  Too bad I had to shoo everyone away because I was already late for a meeting, but I get to breathe a sigh of relief that I'd actually made it!  0.5 miles on the odometer, my longest drive ever!

The show was a lot of fun.  60 different cars of all types: 3 Ferraris, a top fuel drag racer, a bunch of classic and modern muscle cars, a couple VW busses, and one electric car.  After 2 hours of answering questions I have to once again close up shop and go to a meeting. 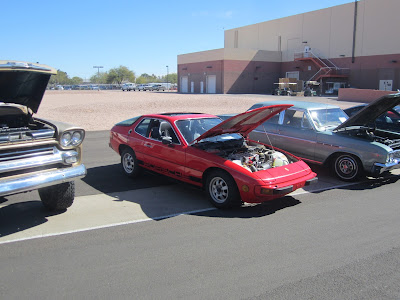 I'm disappointed in the driving performance.  With the way it's set up I should have plenty of torque to get around and with 80 volts I should be able to go at least 35 mph.  After work I pull out the laptop again and plan to take some real time data while we drive out.  Hopefully I can find something wrong that I can fix.  Of course it can't hurt to toggle the current setting up another notch to 4.  Acceleration is noticeably better, but this time I max out at 11-12 mph (the speedometer is barely above the first line!).  I timed my exit so I wouldn't have anyone waiting on me, but my dad (who also work here) zipps up in his TR4 and heckles me a bit for being a slow poke!  We loaded up the car and drive it safely home.  All in all it's a good day.  I'm fairly confident that there's something in the software that's severely limiting the performance.

On the drive back to the trailer, my friend took a couple screen shots of the data as it streams by.  The current commanded is about 60, which corresponds with about 100 amps, and the current feedback is the same.  So for some reason it doesn't seem to want to go above that.
All these parameters have a max value of 512, so the value divided by 512 gives you the percent of max (except the thermistor).  The current readings are incorrect because we've tricked the controller by changing the current sensor and didn't change the software.
Green = Thermistor Reading (73 °F)
Red = Throttle position
Pink = PWM (about 17%)
Blue = Motor Current Feedback (controller thinks it's about 60 amps but it's really 100 Amps)
Light Blue = Battery Amps (controller thinks it's 10 amps but it's really 17 amps) 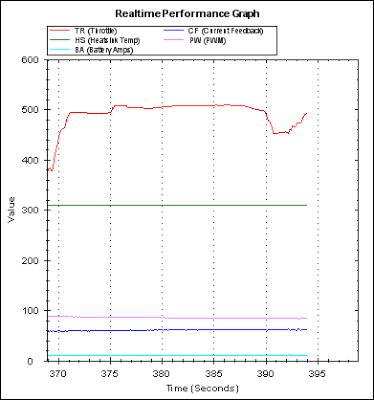 Luckily, after looking at this data, Joe figured out the problem the next morning!  When we tested the controller the first time back over the Thanksgiving weekend, we had it hooked up to some RC plane batteries and a treadmill motor.  In order to keep from ruining the batteries (which we probably did anyways), we changed one of the parameters to limit the current from the batteries to 10 amps.  We never removed this restriction, so I'm still limited to 10 amps coming out of the battery.  Since the current sensor is calibrated differently, it's actually 5/3 of 10 amps (or 17).  At 80 volts, that's only 1300 watts or 1.75 horsepower, so no wonder we could only go 12 mph!  Most hairdryers put out more power than that.

Stay tuned for an update on the performance after I monkey with the settings this weekend.  Including 0.8 miles at the car show I've now driven a total of 0.9 miles! 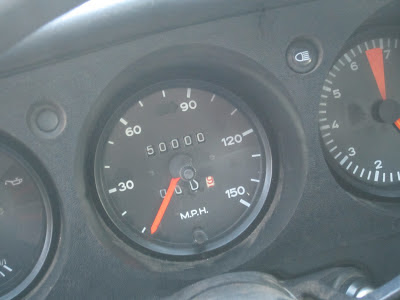