It's been a while since the last post, but as usual that doesn't mean I haven't been working.  Last time I showed you the circuit board for the battery charger full of pieces.  Well I've come a long ways since then.  If you can see through the next of wires in this picture, you can see the charger half assembled.  Actually, almost all the important stuff is there, it's just missing a couple sides of the case.  Joe has written some basic code and we're testing out the boost and buck phases. 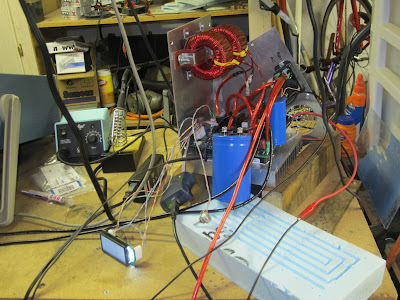 Yikes!  It's plugged into a standard 110 VAC outlet!  But it works! 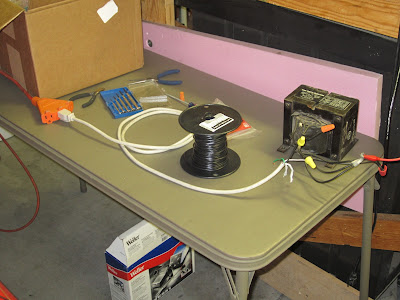 Initially, we're pumping current into a space heater element, but once that works for a while, I drive the car up and we hook it up to the 80v pack in the car.  It works!  We've pumped 8 amps into the pack with no problems...so far... 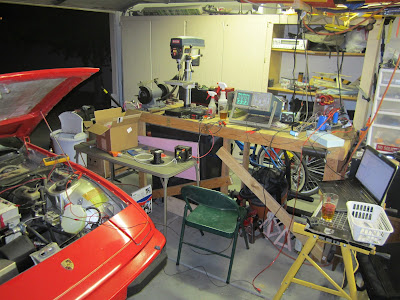 Here's the nifty LCD for the charger that will display stuff like the current, pack voltage, etc. 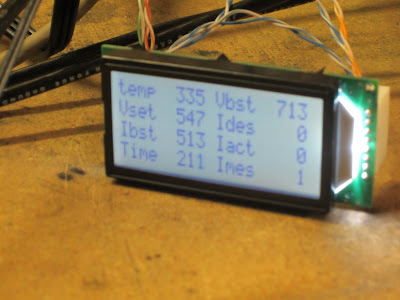 I'm not exactly sure what the point of this one was, but I think it's the outputs of the boost and buck phases. 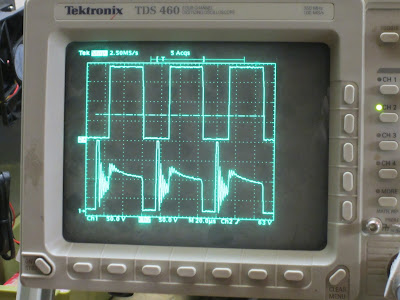 Next I start working on the battery monitoring system (BMS).  The purpose of this is to keep track of the voltage on each battery to make sure that it doesn't get over charged or over discharged.  It comprises a "master" circuit board and three "slave" boards.  Each slave will be hooked up to 23 or 24 batteries.  It will have three microprocessors that check 7 or 8 cells, reports those voltages back to the master board, takes one temperature reading, sends that to the master, then tells the next micro that it's their turn.  Here's the bare  PCB that I designed and just got in the mail. 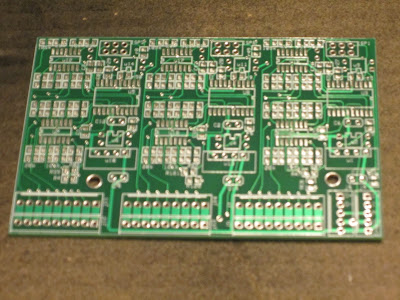 After a couple hours of working on them, this is what all three of the boards look like.  It's pretty hard to tell, but I've soldered in around 350 surface mount resistors that are a mere 0.080 x 0.040 inches big.  More on these later. 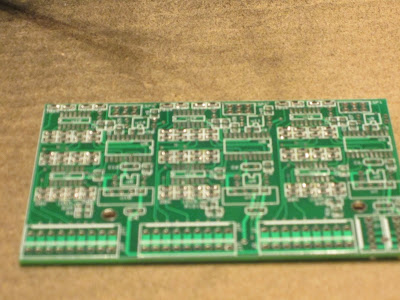 Ahhh, what have I done?!  I sliced two gaping holes in the floor of the car!  Just below these holes are the two rear battery racks.  Initially I was imagining mounting all the batteries in the racks, then lifting them into place.  After a while I determined there was no way I could make that work because the racks were hard enough to bolt up with no weight in them.  So to make it easier I sliced some access holes in the floor that I can drop the batteries into and hook all the wires up through. I'll put some covers over these later, and the floor will still look like it always did.  No holes to lose my groceries through. 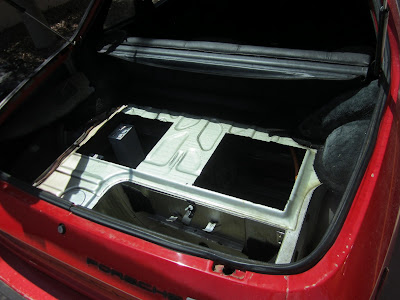 Here's a close up of one of the holes with some batteries in place.  Nice rack! 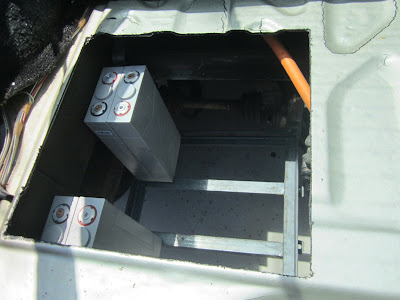 I'm sure you picked up on it earlier, that I've done some more work on the charger that didn't go so well.  The first test charging the batteries was pretty quick.  Just yesterday we were hoping to fully charge that pack and see if the charger would automatically shut off on its own, but we didn't get that far.  After a short time, Joe noticed a funny smell.  I tried blaming it on every piece of electronics in the room, but it was pretty obvious that it was the charger when a small plume of smoke started to rise from it.  After disconnecting the power, we determined the smoke was coming off the inductors, but strangely they weren't hot at all.  Even stranger was the sheet of aluminum that the inductors were mounted to was smoking hot!

Long story longer I figured out we'd accidentally built an induction heater.  It turns out you can't run a continuous electric circuit through an inductor without creating a single winding transformer.  The alternating current through the inductor induces a voltage in the bracket that goes through it, and since there's very little resistance, the current is fairly high, which makes heat...and eventually smoke.  Good thing is I think I can fix the mounting without too much trouble to eliminate the circuit loop.

Next up I'll be pulling the battery racks out to clean and paint.  Meanwhile I'll charge all the batteries and get them mounted in the car.  Wiring will be a project since I need to hook up an extra wire to each cell to check the voltage with.  I'll also finish up the BMS and do some more testing on the charger.  Then a couple dozen more things and I'm done!
Posted by Micah at 1:39 PM