Last week was a bit of a cliffhanger, so I think I need to finish (or at least update) that story.  You may remember I had a nicely charred connector going into the back of my fuse/relay box.  After a staring at it for a while I finally concluded that this wire was the 12v supply for my headlights.  Makes sense since the headlights don't seem to be working.  I clipped that wire off and plugged the connector back in and everything's working identically to how it worked before.  All I need now is the right bullet connector to put that wire back in and hopefully my headlights will work again.

In other news, the blog recently passed 10,000 views!  I had no idea it would turn out to be so popular.  The pace is getting ever faster too because in the last month alone I've had nearly 1,000 views.  It's also interesting to see where people are who are checking it out.  Some of the top hitters are United States, UK, and Germany, which all make sense since I know people in all those locations.  However, there are tons of people checking in from places I don't know people from like Latvia, Russia, Sweden, Australia, Ukraine, and the list goes on.  Even more fun than that, I get occasional emails from people with questions or comments, like my new penpal from the Ukraine who is converting his own Porsche 924!  If you've ever thought about it, please feel free to send me a message.  I love talking about my project, just ask my wife!  On to the latest progress...

This is a good time to check what's left to do (not that it'll ever be 100% done).
- I still have not finished installing and programming the BMS
- I need to install the DC-DC converter
- The charger could use some more optimization to boost output and efficiency
- There are a number of cosmetic things that would be nice to fix

For some reason I've been ignoring the BMS for a while.  Probably this is because it would be nice to have a solid day or two to install, debug, and calibrate the whole thing.  Even though it really shouldn't affect things, I feel like anything hooked up to the HV system shouldn't be in a state of debugging for an extended period of time.

Not having the DC-DC converter in has been inconvenient for a few reasons.  First, that would have avoided that first breakdown, and second, it's a pain to have to charge the 12v battery every night.  I actually started installing this just the other day.  I've got all the wires attached to the converter and mounted it, I just need to make the connections to the HV and 12v batteries now.  This is a Meanwell HRP-600 12v power supply.  It can put out up to 53 amps, and costs only $130, which is a steal compared to the DC-DC converters you see on EV websites that are "designed for EVs" that cost hundreds of dollars more.  Here it is with the wires hooked up and before I put it in the car. 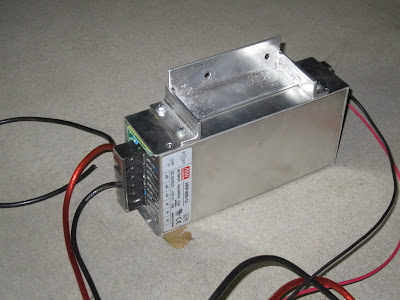 Speaking of breakdowns, I also mentioned a while back that after the 12v battery died on me I still had problems after charging that battery.  I believe if figured out that problem.  In the process of troubleshooting, I wiggled the connector that plugs into the control board in the motor controller.  I'm pretty sure that either the 12v or ground pin on there was loose.  The wires are probably a little too short and were pulling on the connector.  "Soon" I will replace those wires with longer ones and recrimp the pins.  If the problem comes back I'll just solder them directly to the board.  For now it seems to be working after going back to the old wire.  I've had no problems in the last 50 or so miles.

The charger probably will get another look when I install the BMS because I'll have to reprogram it to accept a BMS input.  Until then I'll settle for 4.3 amp charging rate out of a standard outlet that doesn't seem to trip the breaker (unless I'm also trying to use my electric lawn mower).

As far as cosmetic work on the car, I replaced all the hardware for the sunroof.  Now when I take it off, the wind dam doesn't want to dangle in my face while I drive!  The next thing to do is get a new interior light that's dangling in front of the rear view mirror from its wires.  That and the lack of a driver's side sun visor and window crank knob are really annoying!

Well, I've taken up enough of your time for one post, plus I need to put the kids to bed!  Next time I'll tell you about all the problems I'm having with my cycle analyst.
Posted by Micah at 7:12 PM