It was a pretty good year for driving the electric car.  My goal was 5000 miles, and I made it to 4893.  I was on track to make it, but the Tuesday a week and a half before Christmas, something happened on the way home.  At first I noticed a very subtle looseness in the steering that would have been imperceptible if you hadn't been familiar with the car.  Then I noticed some brake squealing coming from the front driver's side wheel.  Finally I notice the speedometer isn't working!  I know the speedo cable attaches on that same wheel that the noise is coming from, so I figure the end of the cable broke off and was somehow scraping on the brake rotor.

I got home and pulled the wheel off.  To my surprise, the entire rotor assembly was loose!  The wheel mounts to the rotor, and rotor is supported by a pair of wheel bearings.  One of the bearings was completely pulverized, and the only thing keeping the wheel from falling off was the brake caliper!  Yikes, I dodged a bullet there.

Meanwhile, I've been planning some maintenance on the car for the Christmas break, so parking the car a few days early isn't a big deal.  When I put the car together a year and a half ago, I had to fit the motor in and out a number of times and I was using the old clutch to avoid banging up a new one.  Well, before I knew it, the car was all put together with the old clutch and I wasn't about to tear it all apart to replace the clutch.  Well, not too long after I started driving, I began to hear some clutch noise.  It started slow, and eventually got worse and began to vibrate.  I decided it was time to get a new one in there.  The biggest downside is it requires removing either the front or rear set of batteries to make the swap.  Here I've got 24 cells removed along with the BMS.  No turning back now. 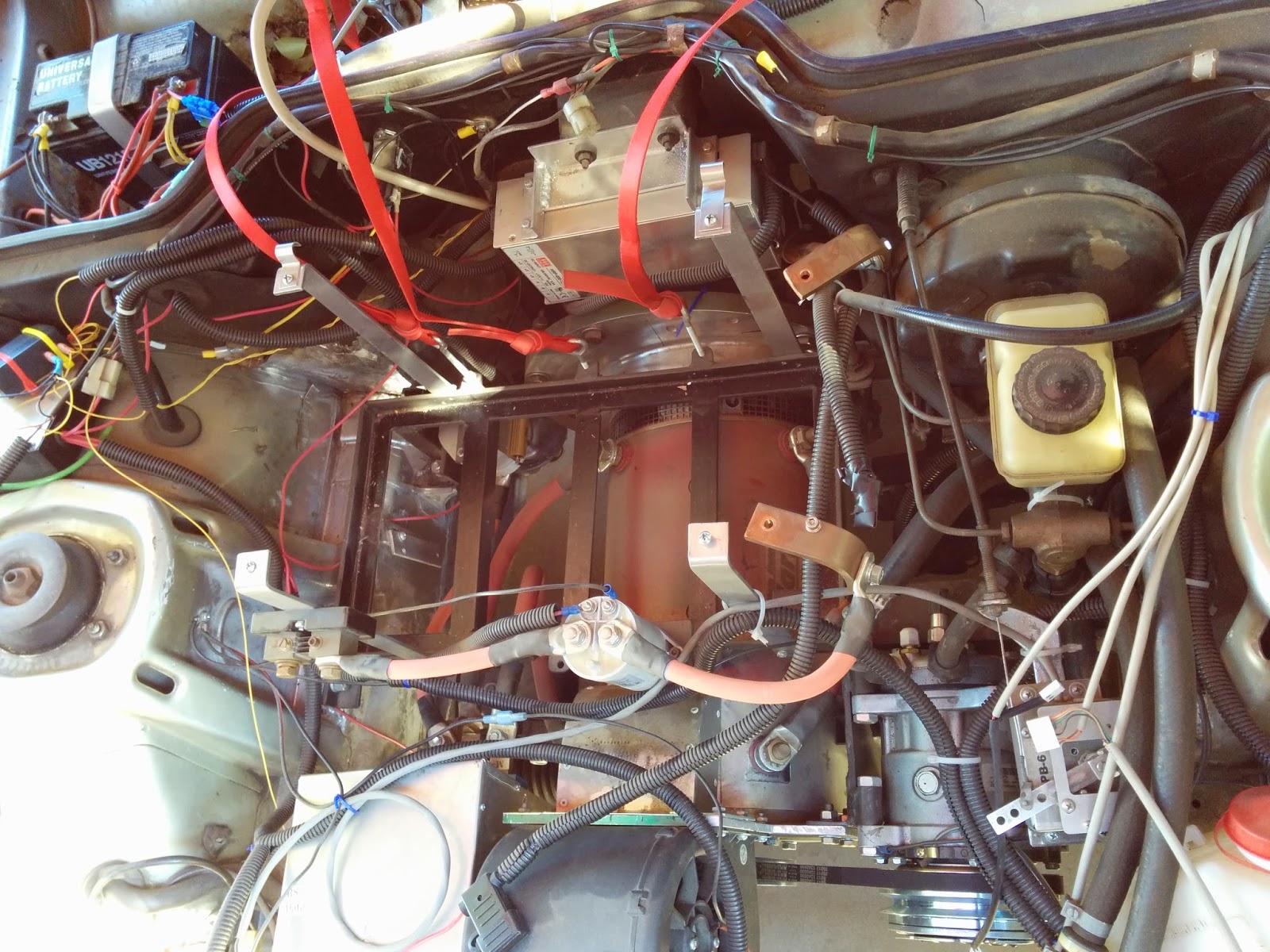 2 hours of work later and the motor is pulled out enough to remove the clutch.  When I pulled the disk out I was expecting it to look pretty bad and I was a little disappointed that it looked okay.  Not bad enough to be causing me all the issues I've been seeing. 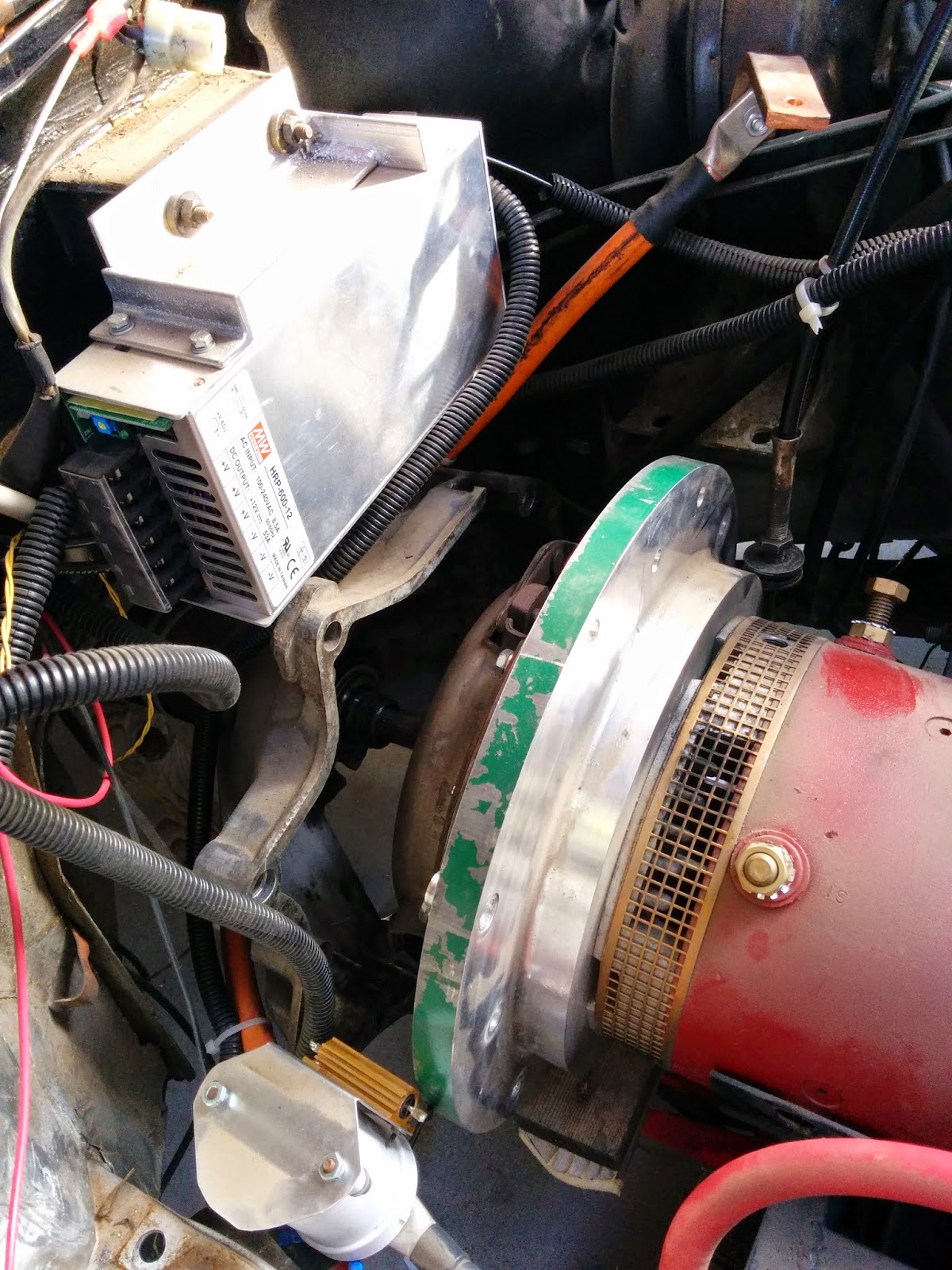 I dig a little deeper, and here's the problem.  The pilot bushing in the flywheel adapter is totally worn out!  Not a good sign if this needs replacing every 5-6k miles.  Something more significant must be wrong.  For that, we need to jump into the way back machine for the rest of the story. 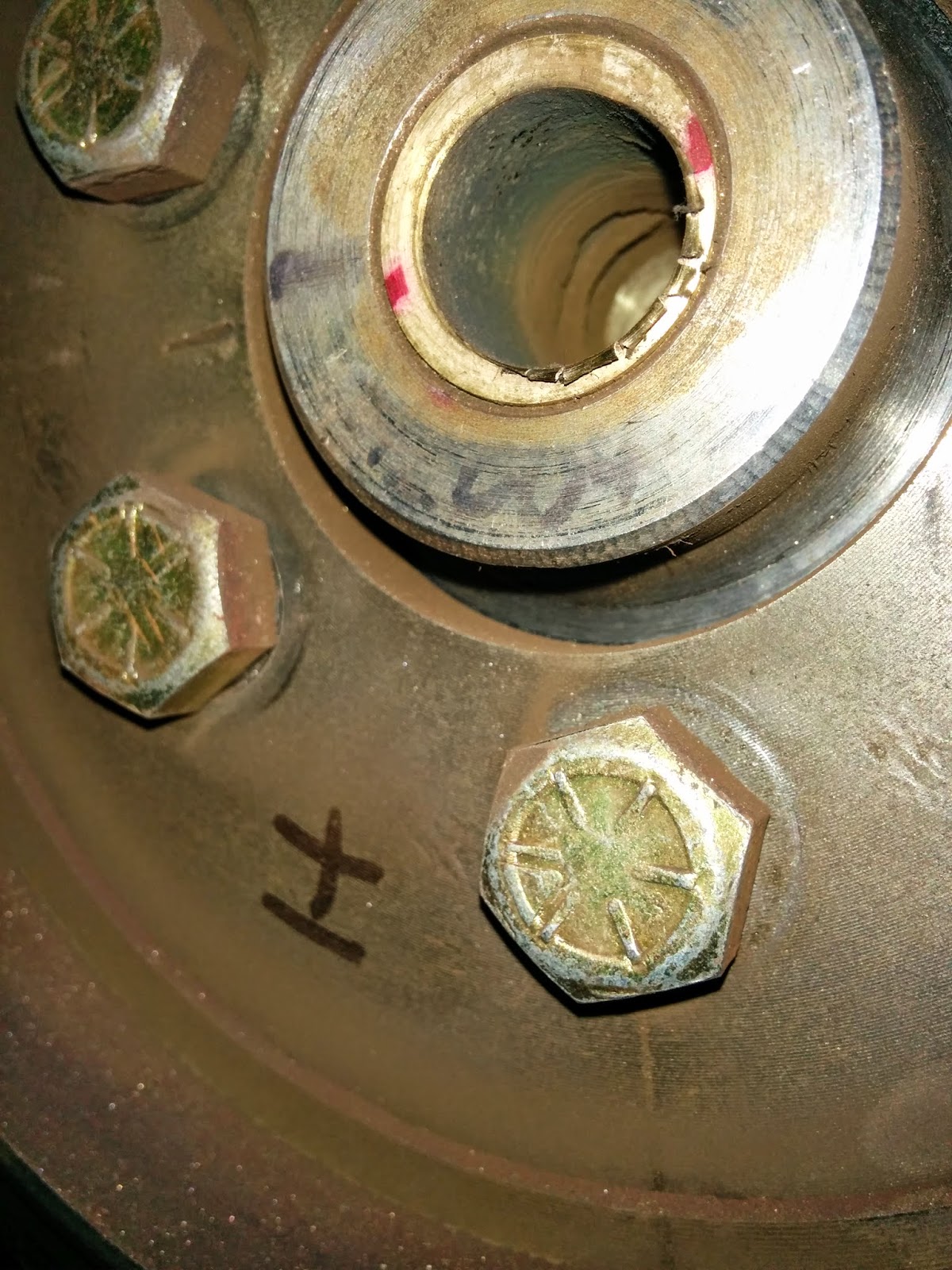 About 2 years ago I was spinning the motor for the first time and excited for the day I get to finally drive the car.  When I first mounted the motor in the car and spun it up, it made a fairly significant clicking noise.  I don't recall if I blogged about that, but I had the motor in and out a dozen times in an attempt to fix it, mostly working on improving the pilot bushing.  Nothing I did seemed to fix the problem so I started to suspect there was an alignment problem between the motor and the bellhousing.  I loosened the mounting bolts a bit and used a jack to lift on the motor adapter to see if that made any difference.  What that did was change the angle between the motor shaft and the driveshaft.  I found that a very slight angle made a significant improvement in the noise, so I shimmed the joint and bolted it up.

The noise was all but gone, and I didn't look back because I was finally on the road.  Deep down I knew it was a bogus solution, but my desire to get the car rolling after 20 months of work was overwhelming so I chose to ignore it.  Well, apparently my days of looking the other way are over, and I find myself in the same spot I was in Feb of 2013.  What to do now?  Well, to start I need to fix the pilot bushing.  The original Porsche used a pilot bearing.  I didn't try this because I assumed it wouldn't fit with my flywheel coupler design.  Too bad I never checked the dimensions because it actually is smaller than the bushing I made!  With the increased load capacity of needle bearings vs. the phosphor bronze bushing, this ought to last longer. 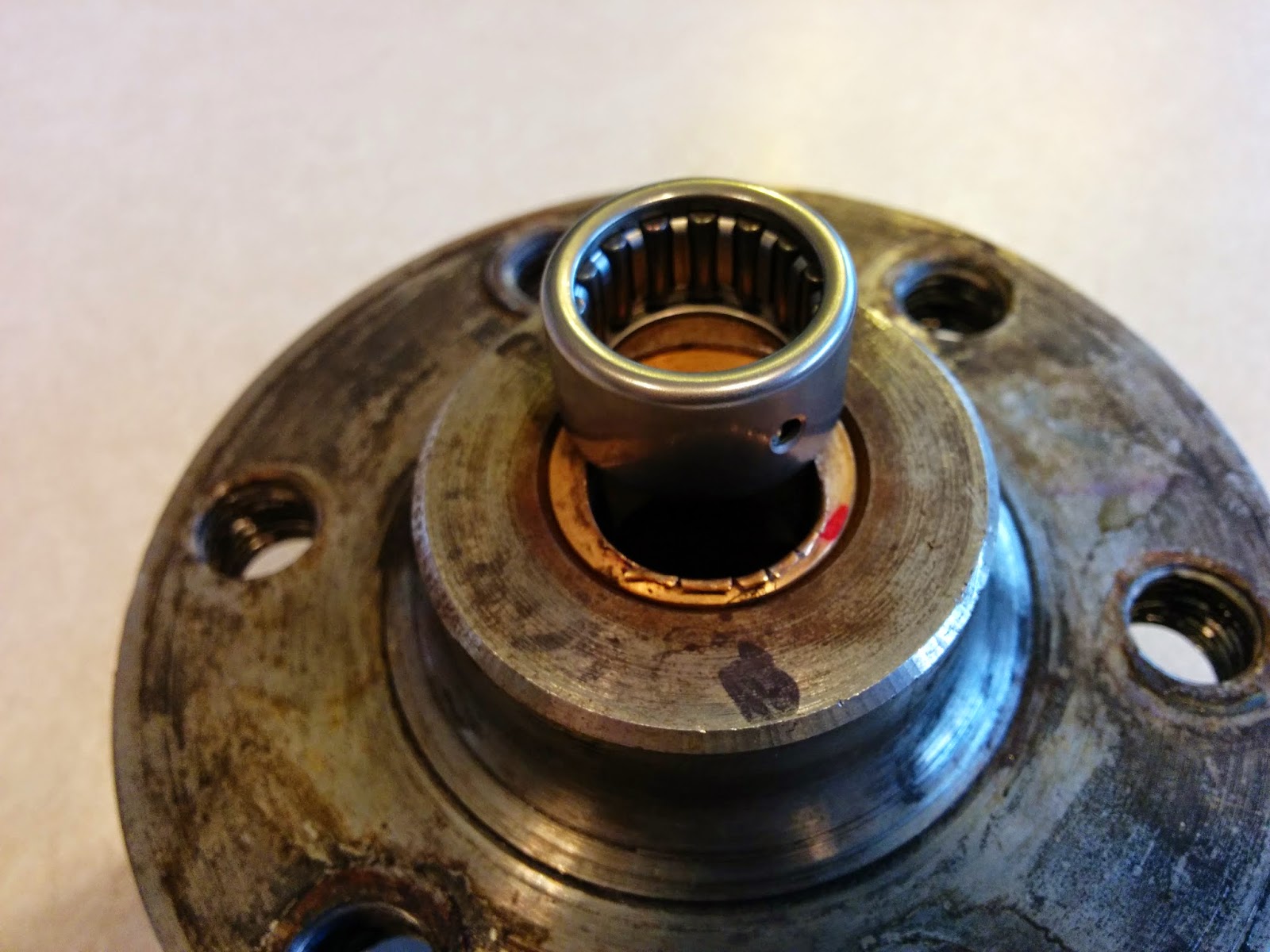 My neighbor happened to be working in his garage the yesterday, and it also just happens that he is a professional mechanic and builds race cars, so I stopped by with the coupler to see what he thought.  He took one look and said the motor shaft and driveshaft centerlines aren't lined up.  He'd seen it a dozen times with poorly made motor adapters.  He sent me back home with a homework assignment of taking some careful measurements to figure out where the problem is.

I'm lucky enough to have an inspection panel on the clutch housing, so I have a 4x4 inch window to look at the parts.  Without the clutch and flywheel in place I can get a good view of the driveshaft and coupler.  I put the motor back in place and had a look.  Note that I've opened up the hole in the pilot bushing to accept the new bearing, but haven't pressed the bearing in yet.  Here you can see from the bottom that the shaft lines up fairly well left to right. 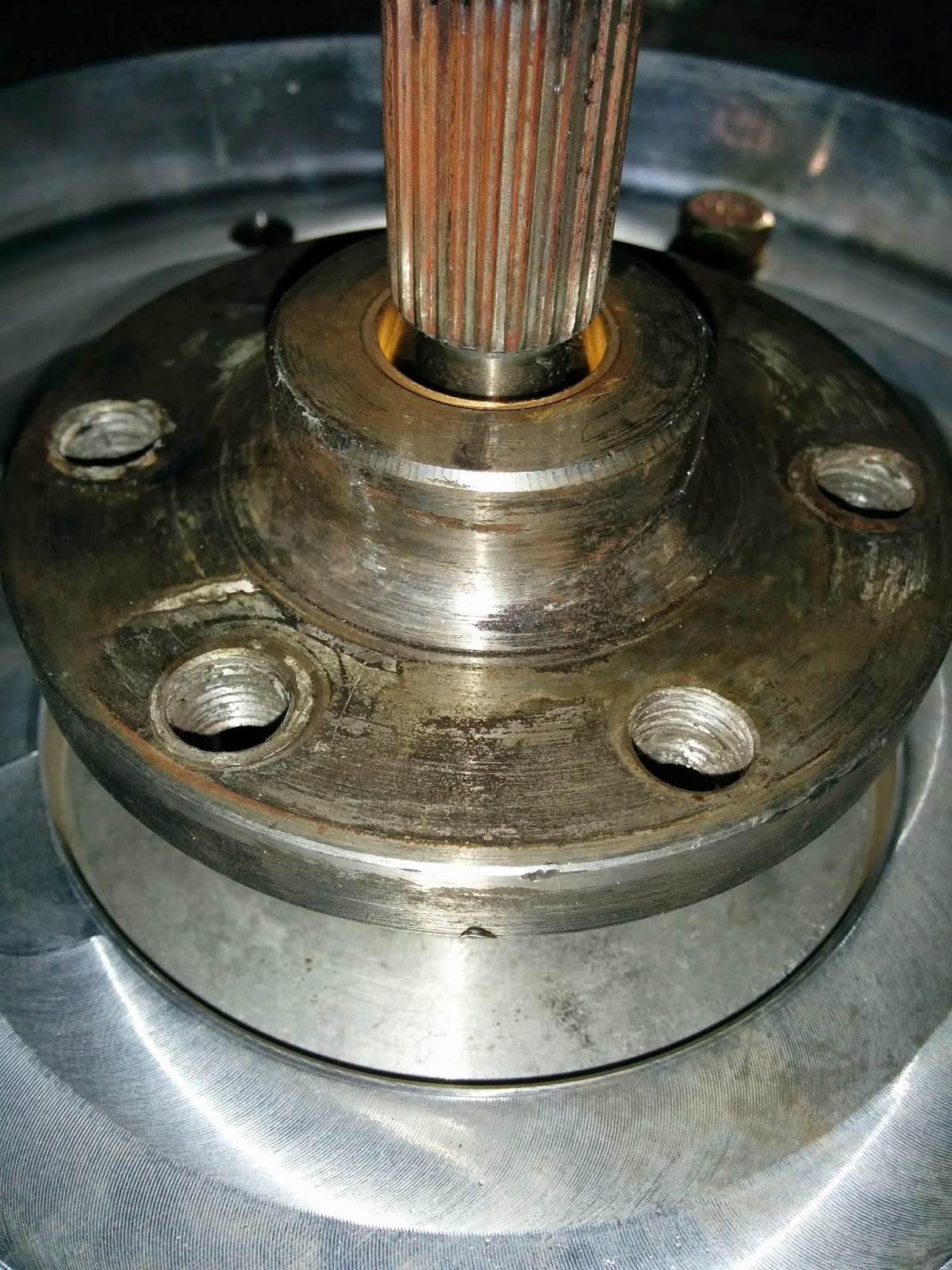 You can see a side view from the inspection hole, but I squeezed the camera in there and took a picture from the left side.  Now it's obvious there's an alignment problem in the vertical direction!  As unfortunate as it is to have this problem, I'm ecstatic to find a concrete problem that I can now solve!  Instead of being a poorly made adapter plate, I'll call this a poorly designed one since I took all the measurements.  Reworking the adapter is going to be interesting, but I've still got 7 days of vacation to figure out how to do it.  Better get working... 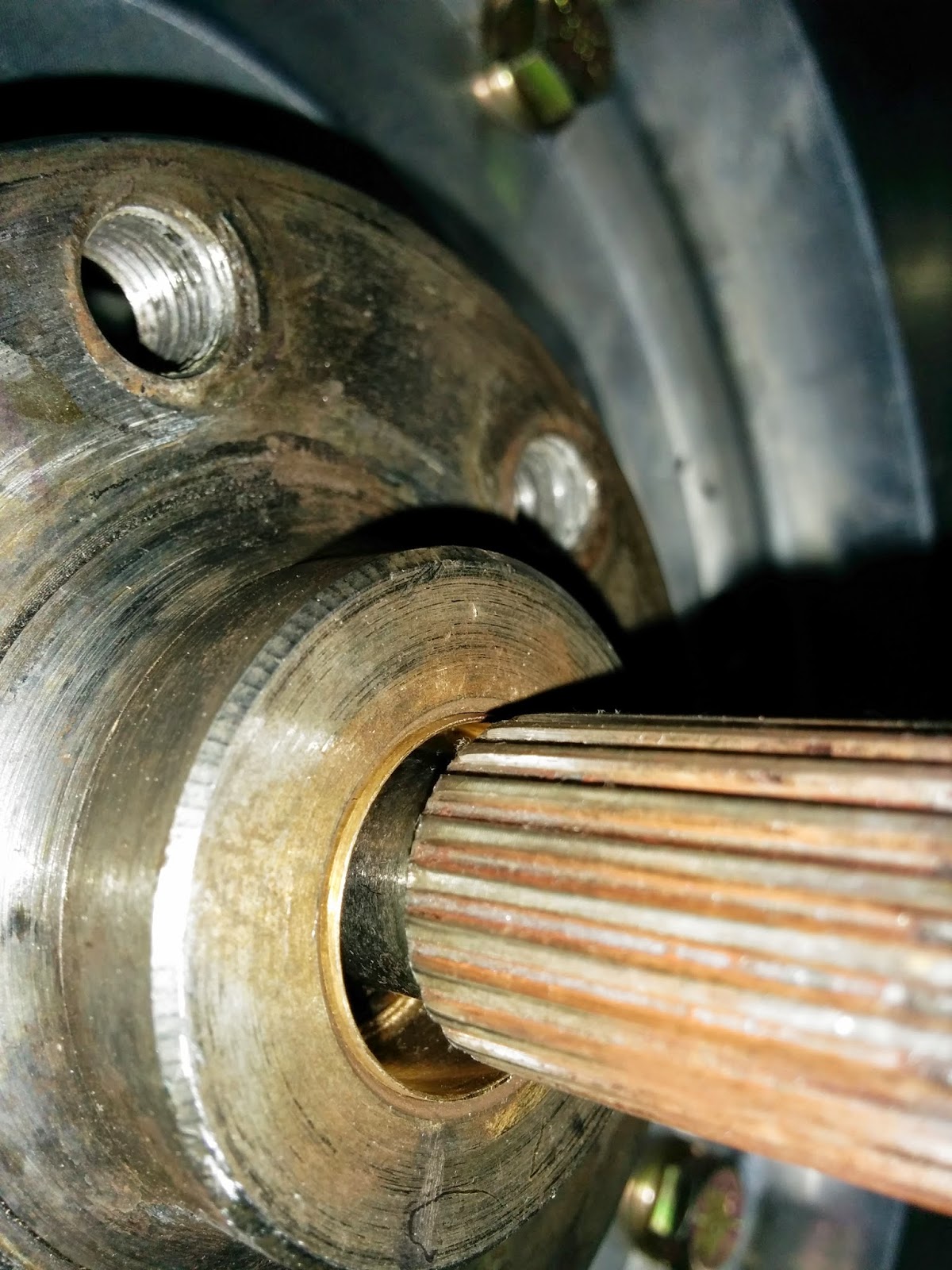