There are lots of electric motors out there and there’s a lot to consider when picking one out.  Most people, I think, have a misunderstanding of what will be best for them.  Here’s a compilation of what I’ve learned and how I chose the WarP 9” motor.

Brief Overview of Motor Types:
Series Wound DC Motors – These motors are by far the most popular among EV conversions.  The reason for this is that they are relatively cheap and produce a large amount of torque for a given amount of current.  This means you need less current to get your car moving.  Since current is somewhat of a commodity in the EV world, you get more bang for the buck with this motor.  In addition, a relatively inexpensive and simple PWM controller is used to drive this motor.  These motors are basically the same as the motors used in forklifts except that they have been modified for higher voltage and higher RPMs.  Some people even get used forklift motors for their car since they can be quite cheap.

DC Permanent Magnet Motors – These motors operate similarly to the series wound motors except that they have permanent magnets for the stator instead of a coil.  They do not produce as much torque for a given current when compared to series would motors.  They also are probably more susceptible to high temperatures than series would motors, though I don’t know that for sure.

AC Motors – These motors are driven off an alternating current.  You achieve greater efficiency with these motors and can easily incorporate regenerative braking, which is why I think they are used on most hybrid cars.  The downside is the controller for this motor is complex and expensive.

Comparison of Series Wound Motors:
I picked the series would motor type due to the cost involved and the high torque output vs current as mentioned above.  The next question is what brand and size.  I’ll assume that all manufacturer’s motors are equivalent in quality, reliability, etc, so this question is more about what size and winding parameters do I want.  I’m going to compare 4 motors that are popular among EV conversions: Impulse 9, Warp 9, Warp 11, and ADC 9.  The three 9 inch motors are approximately the same diameter but are wound differently.  The Warp 9 and 11 are supposedly wound similarly but are different diameters.  One thing to remember is that the power you get in is the power you will get out (neglecting variations in efficiency, which are similar for all motors).

9 Inch Motors - Changing the windings affects the speed (RPMs) of the motor for a given voltage and current.  This means that one motor will spin fast with low torque and another will spin slow with high torque since the power in has to equal the power out.  FYI, power in is the voltage multiplied by the current and power out is equal to the torque multiplied by the rotational speed.  Depending on how much voltage and/or current you can supply to the motor in addition to how quick you want to accelerate and the desired top speed will affect which of these is best for you.  The Impulse 9 is wound for higher speed and lower torque, the ADC 9 is wound for higher torque and lower speed, and the Warp 9 is somewhere in the middle.

Warp 9 vs Warp 11 – Supposedly these two motors are identically wound.  If that is so, then for a given force between the windings (the field and armature) will produce a different torque because of the different moment arm (diameter of the motor).  This means for a given internal force, the Warp 11 will produce around 20% more torque than the Warp 9.  Consequently due to the conservation of power rule, the speed of this motor will be slower in the 11” motor than that of the 9”.

The chart below shows a comparison of motor RPM vs Current at a constant voltage.  Up to about 500 amps this is based on manufacturer’s published data.  More info on extrapolation later. 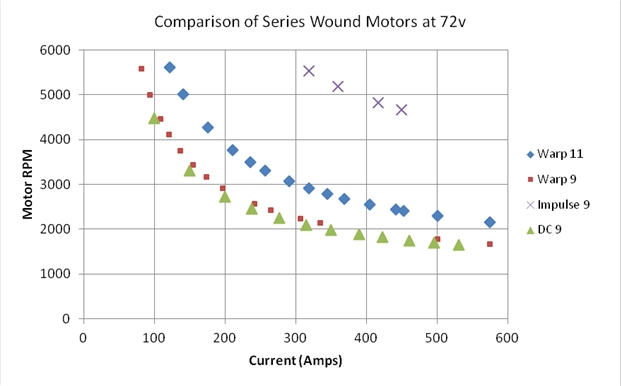 The next chart shows a comparison of torque vs RPM at a constant voltage.  Again, up to about 500 amps this is based on manufacturer’s published data. 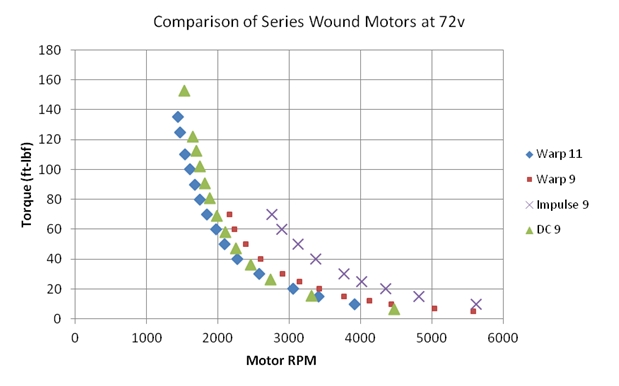 And one more chart that shows a comparison of torque vs current for each of the motors. 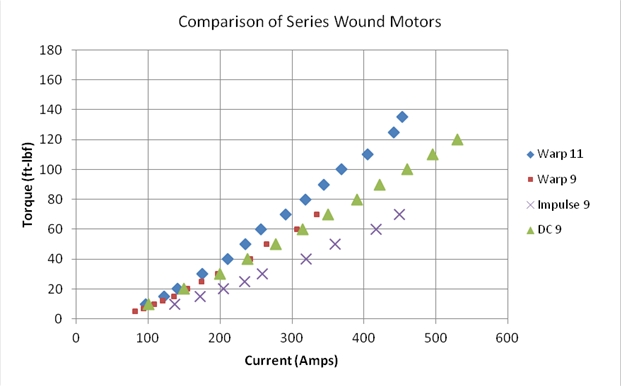 Most people look at this data and say I have a 500 amp controller and I can get 154 ft-lbf of torque from a Warp 11.  I’ll buy that one because it’ll give me the best acceleration.  Well, not exactly.  This is a correct statement technically speaking but it may not really be what you want.  For many people, I think this is common mistake made when designing your car and here’s why.

I’ll start with a typical conversion setup.  144 volts is a common battery pack size because it allows you to use most of the base model controllers and is easily achieved with 6 or 12 volt lead acid batteries.  We’ll also assume you have a 500 amp controller and the batteries are sized to allow you to drive 500 amps to the motor.  Many people would assume you can get 154 ft-lbf for as long as you keep your foot on the pedal.  If this were correct, you could make it from 0-60 mph in a blazing 4.75 seconds.  I see a lot of people on evalbums.com who are building their car with very similar specs and expecting 0-60 in under 6 seconds.  I’m sorry to tell you that this is not going to happen.

Here's what is more likely to happen.  With 154 ft-lbf of torque coming from the motor, you can easily peel out in 1st gear, but it won't last for long.  I’ll assume your pack voltage sags to 120 volts at 100% duty cycle from the controller.  At this point you have 60 kW of power in and we’ll assume you get the same power out.  At 154 ft-lbf, the maximum motor speed is 2300 RPM before you reach your maximum power output.  If your overall gear ratio is 14:1, you are only traveling 12 mph when the torque will begin to taper off.  So you change into second and get a new burst of speed, but that gear starts to runs out at 21 mph.  There are a lot more factors than I previously mentioned, but you’ll find that you can easily spin the wheels in 1st gear, but it takes you about 9 seconds to get to 45 mph (if you start in 2nd gear) and an excruciatingly long 20+ seconds to get to 60 mph.  Here’s a plot of a simulated run of the first 10 seconds if you shift at 3000 rpm.  I’ll describe more of the parameters I used in a future post on performance predictions. 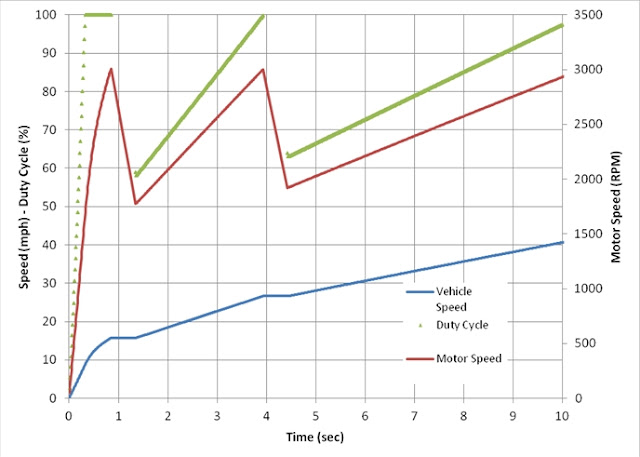 So now what do you do?  Well, what this means is that you need to determine what’s most important to you.  The only way to get those super fast speeds like you see with the White Zombie drag racer is to have lots of current, and more importantly, very high voltage (higher voltage means more peak horsepower, which in turn means you get max torque up to a higher motor speed).  I’ll talk more about that in the future post on performance.  For now, we’ll assume you’re on a budget and want to stick to a low voltage (160v nominal or less) controller and battery pack.  The problem we ran into in the example above is that the battery pack reached peak power output at a low motor speed.  This causes you to shift early and reduce your gear ratio (i.e. less torque at the wheels and less acceleration).  If you trade some low end torque for higher motor speed, you will get that max torque output for a greater RPM range.  The extreme case for this (in our set of 4 motors) is the Impulse 9.  This motor is a good choice for people with lower battery pack voltage.  You can see from one of the charts above that it only gets 70 ft-lbf of torque at 450 amps, but at 120 volts you will get that same torque all the way up to 4650 RPM, or around 24 mph.  With this motor and the same example as above, you would be able to accelerate to 45 mph in 8 seconds and to 60 in about 14 seconds.  This performance is comparable to that of a normal car. 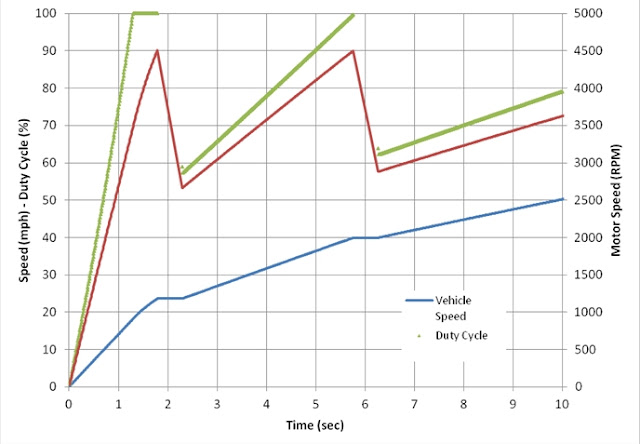 The Warp 9 was redesigned in 2010 and I’ve seen groaning on some forums from people who didn't like that Netgain lowered the output torque for a given current.  Well, they did it for a reason, and I presume it’s exactly the sort of thing I described above.  Targeting the largest audience who use a low voltage controller, the newer designed Warp 9 will give you a good balance of peak and high speed torque.

So what can we conclude from all this data?  If you are not running a high voltage system, you will probably be disappointed with the performance of a large motor.  It also tells you that you need to do some math if you really want a high performing vehicle.  Just putting a big motor (or lots of batteries for that matter) in your car will not make it fast if you don't apply it properly.

For me, I want more of a hot rod, meaning more off the line torque.  That’s why I picked the Warp 9 over the Impulse 9.  But in order to meet my 0-60 goals, I was forced to consider a higher than typical battery pack voltage and controller current.  After figuring out what was economically feasible for me, this motor gave me the fastest 0-60 time when compared against the ADC 9 and Impulse 9.  If I were using a different battery pack or controller, that may be different.  Like I’ve said before, more info to come in a future post on performance predictions.
Posted by Micah at 8:16 PM