Happy Father's Day to all you fathers out there.  Today I celebrated by driving the car to church!  At 5 miles each way, this is my longest drive to date.  I got a  30 day temporary registration on Friday, so I've got a nice amount of time to test things out before taking the 20 mile (each way) drive into Phoenix to get all the registration stuff sorted out. 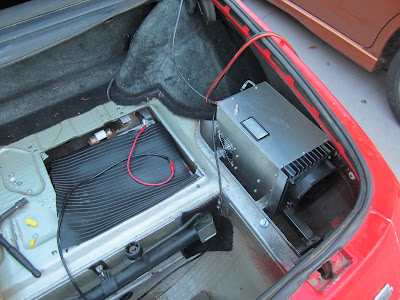 Of course, mounting the charger means making another bracket.  Man, I've made so many darn brackets.  They look so simple, but to get this charger in took two full evenings of measuring, cutting, and welding.  Thankfully this is the last major fabrication I have to do at least in the foreseeable future.  As you could see in the picture above, I still don't have the charger permanently wired in yet, which is good.  I've had a few minor issues to deal with and reprogrammed it a couple times.  The voltage sensing circuit had to be calibrated, and I keep getting an occasional safety fault that trips and shuts things down.  Here's what it looks like when it's charging. 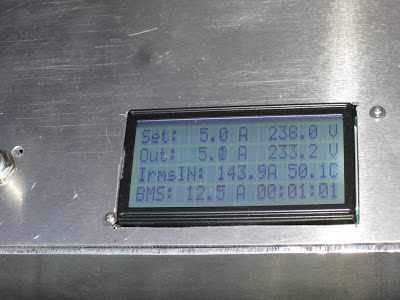 Set is the current setting.  Out is the actual current going into the battery.  IrmsIN is the RMS current coming in from the wall (not right at the moment). BMS is a signal from the BMS that tells the charger the max current it will let it charge at (currently hard fixed since the BMS isn't finished yet).  Then on the right, the top number is the voltage it will charge to and the one below is the current voltage.  The fourth like is the IGBT temperature, and finally the time it has been charging.

On Thursday night I'd worked out a few bugs and charged all the cells up.  I think 51 °C was the max temp I saw.  Considering it's about 100 degrees F out, that's only a 23 °F rise in temp, which is good.  On Friday, after getting my temp tag I took the Porsche on its first real trip - 1 mile each way to the grocery store.  Then today I put in another 10 miles.

I hooked up some instrumentation that keeps track of the voltage, current, and total energy consumed (among other things), so now it's time for a little post-trip analysis.  For some reason it didn't turn on for the first mile, so I only have data for the proceeding 11 miles or so.  I maxed out at 163 Amps to the batteries.  I have the controller set at 166 Amps max, so that checks out.  The min voltage was 203 volts, so if the nominal voltage was 235 (resting voltage), that's about a 14% sag at 2.7C discharge.  I'm guessing that most of that isn't due to the batteries, and mostly attributed to the 90 or so connections in the string.  If none of the sag were due to the batteries, that's about 2 milliohms per connection.  That's good enough for the aircraft industry, so it's good enough for me.  I consumed 2,345 Watts, so that's 213 W/mile.  Granted 11 miles is only an estimate, but that's really good for an electric car.  Also, I was consuming slightly less than 1 Ah per mile.  The cells are supposed to be 60 Ah, which implies a better range than I was originally expecting.

Soon I'll be hooking up the charger for good, which means I need a fancy plug in place of the gas cap.  I picked one of these up online.  It's a charging port for a boat so it should be fairly weather resistant.  I need a disc of metal to mount it to.  Unfortunately, I don't have 7/8 inch and 3.60 inch hole saws to cut it out with.  Luckily I'm still borrowing my buddy's lathe, so here goes nothing! 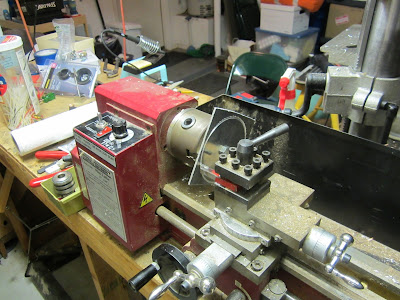 I'm making a lot of progress on the BMS.  Hopefully I'll have more to share on that soon...
Posted by Micah at 1:13 PM