Motor Adapter is in and the motor spins!

It's been a while since the last post.  Not because I haven't been getting any work done, but I've been delinquent on updating the blog.

I finally got one of the last pieces I needed to get the motor installed in the car.  The old engine mounts to a bellhousing and I needed an adapter plate that would allow my motor to mount to it instead.  A friend of mine at work knows a guy who owed him a favor and also happens to run a machine shop with CNC mills.  I bought a huge block of aluminum (15 inch diameter by 2 inches thick) and sent that plus a CAD model of the housing I wanted away back in February and 10 weeks later it came back weighing about a two thirds less.  The only downside is it cost $300 more than the free me and my friend were expecting.  Oh well... 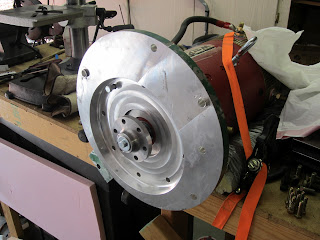 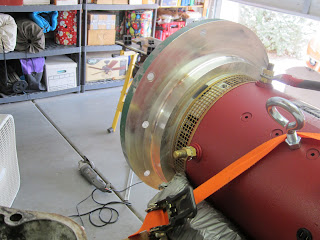 When designing it, there were a few real important things to consider.  The most important was getting the motor lined up as perfect as can be with the drive shaft.  There are two alignment features that were part of the engine block that I needed to recreate.  There are also about half a dozen bolt holes, but due to space it wasn't very easy to accurately measure them all.  I decided to only dimension the alignment holes to the motor pilot hole and plan to drill all the bolt holes after I got it back.

Many vehicles have alignment pins, but mine have bolts going through them, so they're actually alignment cylinders.  In order to avoid having to pay for a 2.5 inch thick block of aluminum and a lot of extra machining I decided to press in some cylinders myself.  Of course, you can't just buy something like this so I borrowed my friend, Ara's, lathe and made some myself.  The fit was super tight, but with a clamp and a big hammer they both went in!  You can see them poking out in the pictures.

The other thing you might see is a block of aluminum sticking out the side (upper picture).  Before I bought the block of aluminum I hadn't modeled up the part yet and didn't measure something right.  As it turned out I would have needed a 17 inch diameter block to get all of the holes onto the part.  After figuring this out I decided to bolt a block on to catch the last of the holes.  It'll be on the bottom, so unless you're reading my blog you'll never know!

Another thing I wasn't sure of was what orientation I would want the motor when I put it in the car.  In the end I decided to have the machinist cut 8 mounting holes for the motor instead of 4 so I have an option every 45 degrees.

The next thing I did was try putting power to the motor!  I hooked up the flywheel to my new flywheel adapter and clamped a battery to it.  I was a little disappointed to see it has some vibration.  I took the flywheel off and hooked it up again, and it had about the same amount of vibration!  Looong story short, I was able to clock the flywheel differently and everything is really well balanced now, so the adapter alignment and flywheel balance are similar to the balance that the motor manufacturer put into the motor.  When you think about that, that's probably as good as you could hope for.

Next I started working on mounting the motor in the car.  The motor will have a band that goes around the center of it.  From that band there will be arms going to the left and right that attach to motor mounts.  I got some Jeep Cherokee mounts because they're a good shape and pretty cheap.  The motor mounts will bolt onto a pad that I'll weld onto the front crossmember of the car.  I started by cutting out those pads, which quickly became more complex than I originally thought.  It turns out the crossmember is curved and not flat, so I had to get creative in getting the shape just right.  But after a little while with the grinder they fit really nicely.  Next step will be to weld those in and bolt on the mounts, but that'll be next week.


Here is the band I've bent to fit around the motor. 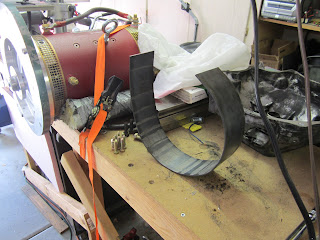 Here is the tool I made to bend the band.  I wanted a smooth curve and not a bunch of kinked corners, and this did the trick. 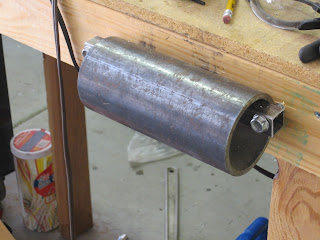 Here is the passenger side motor mount pad. 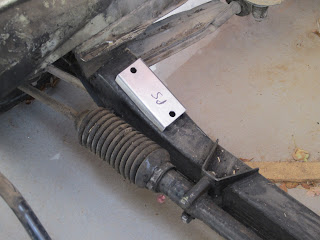 Here is the driver side pad and motor mount. 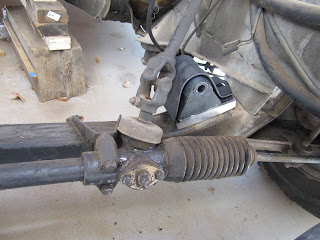 Still not done with this update!  I have been designing the liquid cooling plate for the motor controller for quite some time.  I bought a block of aluminum with the intent of making two of these (one for Joe) and then realized I didn't have a good way to cut it in half.  Six square inches of aluminum is a lot to cut through even with a reciprocating saw.  Luckily my father in law has a vertical band saw that did the trick.  I'll follow up with a post later on that shows how it'll look when I machine the flow passages.

And finally, I got some work done on the dashboard.  I bought some vinyl fabric a while back and trimmed it out to the right shape.  There are some dash overlays you can buy that do the same thing, but cost about 5x what I'm spending, so if this goes badly I can always revert to that.  The overlays just cover the upper half of the dash so that's what I plan to do here as well.  I sprayed the dash and the back of the vinyl with 3M spray glue, let them both dry for 5-10 minutes, then stuck them together.  I still plan to epoxy the edges down, but on the most part it sticks pretty well.  There were two areas that were impossible to stretch the fabric over, so I trimmed those sections with neat, straight lines so hopefully I can patch in another piece to fill the gap without more than a hairline joint.  So far so good! 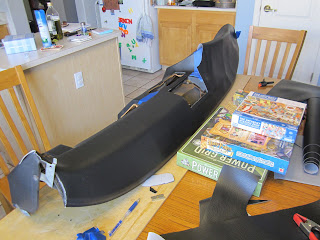 If you've read this far, you must truly be one of my fans...thanks!  I'll try and keep up more often so they aren't so long in the future, but I'm not making any promises...
Posted by Micah at 9:34 PM No comments: