Good news everybody, the Porsche is finally registered! 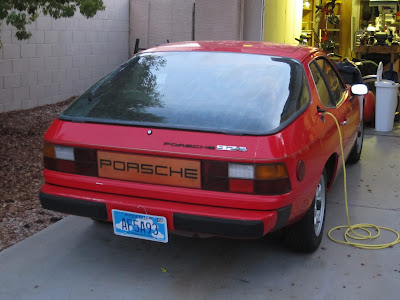 The other good news is I can finally charge the car without having to open the hatch and the hood.  I installed this spiffy outlet where the gas tank fill spout used to be.  I also got a nice 12 gauge cable so I don't have to worry about overheating the wires anymore. 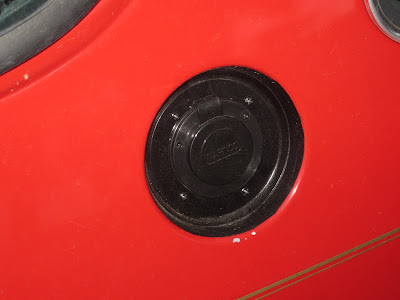 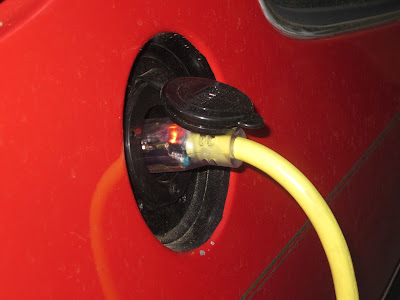 Now for the bad.  I also had my first breakdown!  I was driving to work and I suddenly lost power.  Luckily I had enough momentum to easily coast into a parking lot.  I realized the voltage on the battery was way low and quickly remembered that I haven't charged the auxiliary battery in about 80 miles!  I conclude that the power to the controller was so low that the brownout feature on the microcontroller shut it down before it started malfunctioning.  My kind and loving wife picked me and the battery up, I hooked it up to the charger, and took the jeep into work.

After work I pick up the battery and my wife drives me back to the Porsche.  I plop the battery in and away I go.  I'm about 7 miles from home and after 5 miles, the car starts shutting down again.  Now I'm not feeling so good because the voltage still reads okay.  I figure out that if I take my foot off the pedal, the controller seems to reset and I am able to limp home.

After thinking for a while, a friend comes over and holds the laptop for me while I drive.  The same problem keeps coming up, and luckily I get a clue from the RTD program.  When I lose power that the controller sends restart info to the RTD program, so it appears that the controller is momentarily losing power.  When it regains power it goes into "high pedal lockout" mode.  The controller will sense if you have your foot on the pedal when it starts up and won't allow the PWM signal to start until you take your foot off.  That explains why I can lift my foot off the pedal and keep going.

So now, what's causing this?  I've got a few theories and I try running a dedicated wire straight from the battery to the controller.  Luckily, this seems to work!  I drive 4 miles and have no problems compared to at least a dozen restarts in the previous 4 miles.

There's a relay I put in to power all the stuff I added (controller, pumps, fans, etc.) and it turns on with the ignition.  I've had problems from the beginning that the instruments seem to have a bad ground or something.  A fresh 12.5 volt battery only reads about 11 volts.  The headlight motor doesn't work either (forums tell me that anything less than 12 volts will cause this to not work) and when the headlights go on, the voltage drops even more.  In fact, it seems like turning on the blinkers would cause the controller to cut out.  I'm thinking the voltage gets low enough that the relay loses power and flips off momentarily.

I've known I need to fix this for a while, and it seems like now is the time.  I checked all the ground connections, and those seem to be good.  I look at the fuse and relay box and find a couple of loose wires!  Unfortunately, it is not obvious at all where these go, but it doesn't appear that they have anything to do with grounding or the headlights.  I snoop around for a while, and suddenly I see this! 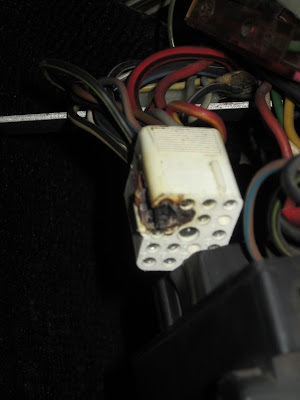 Gah!  I'm pretty sure this is one of the 12v power supply lines going into the fuse and relay box.  This must have been loose for a while and the poor conductance built up heat and eventually fried this connection.  I have no idea how long it's been like this, and to my knowledge I've never messed with these connections.  I'm not sure how I'm going to fix this but I'll have to reroute power to the fuse box.  Hopefully this is the problem!

Let's end on some good news.  I've racked up 235 miles so far, so I've almost saved an entire tank of gas!  I can feel the savings rolling in!
Posted by Micah at 8:15 PM No comments:

I finally achieved one of the major goals today.  Here's my story!

In order to register your vehicle, you have to have your car emissions tested.  Unfortunately, not having a gas cap or any of the emissions equipment the car was originally equipped with, I can't pass this test even though I'd pass the intent of the test.  So I basically have to have the emissions test waived.  To do that, I have to get an "Alternative Fuel Certificate" issued for my car.  To get that, it must be inspected, and unfortunately, that cannot be done any any old MVD office.  In fact there are only two offices in Arizona, the closest of which is 21 miles from my house.  I guess it could be worse if I had to go to the Tucson office.  My design of the car was for a 50 mile range, so that doesn't leave a lot of room, especially when you consider you can't test much until you get the car registered!

Luckily, there is a 30 day temporary registration option that I got back in mid June.  I've racked up 137 miles of testing since then, the longest trip being about 25 miles.  One thing I learned is my range is theoretically greater than I was planning.  The car is more efficient, ranging from 200-240 Whr/mile depending on how many lights I hit, and I was designing around 275-300.  Another way to look at it is I get a little more than 1 mile per 1 Ah on the batteries, and since they're 60 Ah batteries, I should get 60+ miles.  Of course I haven't really tested this yet, but it makes me feel a little better.  Also lucky, my friend, Joe, lives about 6 miles from the inspection office and he offered to let me charge a couple hours before I made it rest of the way home.

With my 30 temp plate expiring on Sunday, I took the Porsche on the journey this morning.  The most direct way to get there is on the highway, so I decided to add that to my list of new things to do for the day.  The car had no problems speeding up and keeping up with traffic.  I even got up to 70 mph at one point!  I pulled into the inspection area after consuming 19.5 AHr.  Three guys hop out of a little hut and come check out the car.  98% of the questions they ask have nothing to do with the paperwork they needed to do, and one guy even pulled out a camera for a few pictures!  One of them said they hadn't seen an electric conversion in over a year, which surprised me.  I'm guessing the electric vehicle tax incentive that went away 18 months ago has something to do with it.  5 minutes later I'm back on the road with my embossed certificate!

6 more miles to Joe's house and I stop to add about 14 Ah back into the batteries.  Then I'm headed back home.  About 2/3 of the way home a sickening feeling enters my stomach as a terrible melted plastic scent fills the car.  I feel slightly better when I see a truck pulling onto the shoulder with his hazards on, and much better when I pass him and the smell goes away.  10 minutes later I'm safely home with 48 miles under my belt for the day.  I figure I'm about 30 Ah down, so it'll take about 6 hours to top the batteries off again.

Now I just need to make a stop at the MVD (yes another one) to get the registration taken care of.  I'm hoping to get one of those alternative fuel license plates with a custom number.  I'll let you know what I decide on.  18 months, and the car is finally legal!
Posted by Micah at 8:21 PM 2 comments: