Let me spin you a story about Headlight Repair

Last week I got off work a bit after 5 o'clock and it was getting a little dark out.  Suddenly I'm reminded of something I've been ignoring for months, that my headlights don't work all the time.  The problem isn't that the lights don't go on, it's that the motor doesn't always want to lift the lights up.  No big deal, the sun has just set and there should be plenty of light to make it home.

About halfway home I get a call from my wife.  She say we're going to have quesadillas for dinner tonight, and you know what make a good quesadilla right?  Tortillas.  So now I've got to stop at the grocery store and now I'm not sure I have enough time to make it home before it's too dark.  Well, the motor doesn't work immediately, but sometimes if I leave them on long enough they'll suddenly pop up a few minutes later.  Maybe that'll work for me.  I rock the switch into the first position, the parking lights go on, and two miles later the headlights decide to go up.  Perfect!  Now I can just leave them up when I go into the store.

I get to the store and realize I've never really used the headlights, so I'm not sure if they'll want to stay up when I turn off the car.  I park, turn off the ignition, and toggle the switch back to off and the headlights stay up, but the parking lights stay on.  Funny, but I can probably get in and out of the store before my battery runs dry.  I run in, grab the tortillas, and I'm back to the car in 10 minutes.  I hop in the car, toggle the switch back to parking lights only, turn on the car, then flip on the headlights...and the headlights flip back down.  Dang it!  First of all I'd apparently flipped the headlights ON before I went into the store and the lights apparently don't work anymore either, then when I thought I was turning them back on I actually turned them off and now they're stuck down.  But I hadn't quite put this together yet.

Well, I've got a ways to go through the parking lot before I actually get on the street, so maybe they'll pop up before I get there.  They don't.  But there's no traffic, it's not terribly dark, and I'm only two miles from home, so what the heck.  I pull out on the street and finally get a stroke of luck.  The lights pop up in a quarter mile and the headlights actually turn on this time!  I make it to within 100 feet of the house and the lights suddenly flick off again.  Sheesh, time to fix the headlights!

Amazingly, I find a website where a guy goes into tons of detail on how to rebuild the motor on a 944 and it looks identical to mine.  Here's the motor with the first dust cover removed and manual knob pulled off. 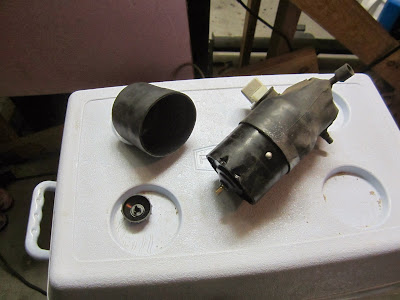 The whole thing is covered in this rubber dust boot, and amazingly it's totally soft still.  I figured it would want to just crack and fall apart. 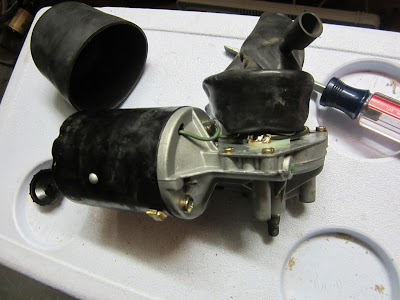 Two screws removed and the case comes off.  You can see the commutator (the copper colored thing) is pretty grooved and not very smooth. 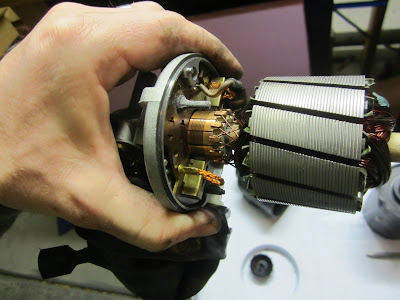 The whole rotor assembly comes out if you remove one screw with green goop on it.  I chuck it up in my drill press and sand it down with some fine grit paper. 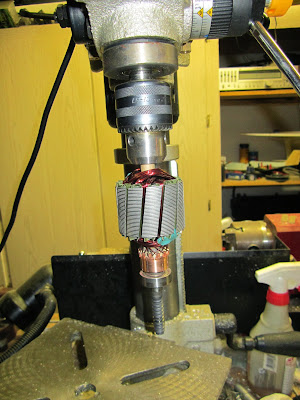 There, nice and shiny! 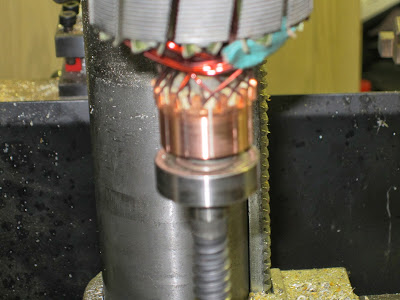 Next step is the switches (which is actually the real problem.  How do I know it's the real problem you say?  Well, I actually put the motor back together and reinstalled it in the car only to find that it worked exactly as it had before.  That's why!).  You can see the switch contacts on the right that ride against this plate on the left.  There are plastic "interrupters" at the end points of travel that turn them off and on.  There was a little bit of tarnish and a few rough spots on the plate, but not much.  I sanded it down really nice and applied a really light film of dielectric grease to the surface.  The switch contacts had a small amount of stuff built up on them, so I cleaned those too.  I honestly didn't think this would make things any better, but it worked perfect after cleaning this stuff up!  By the way, don't lose the tiny ball bearing that's in the center of the plate on the right. 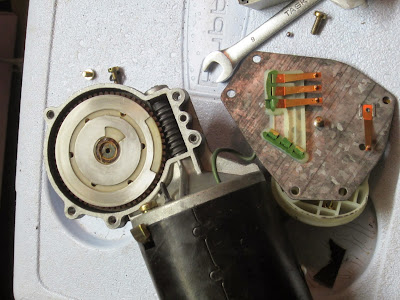 Apparently the required number of screwdrivers to complete this job was 5.  As time goes by, more and more tools make their way onto the workbench and don't get put away and I eventually clean the whole thing up.  There was one time when I counted how many screwdrivers I picked up and it was 18!  Apparently that's my favorite tool. 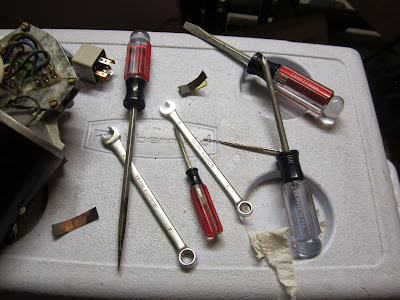 Woo hoo, the lights flip up!  Crap, the lights didn't switch on!  Well, at least I'll have something to do over the weekend right? 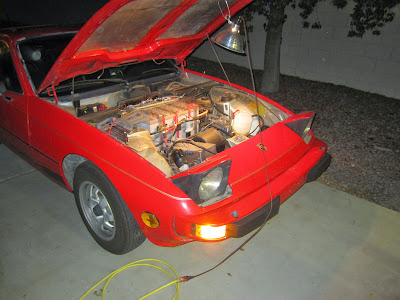 Wow, it's been a long time since the last post, though there isn't that much I've been doing other than driving the car and enjoying the nice weather.  I've racked up 870 miles so far and still going well!

A while back my 12v battery started to show signs of age.  Before I hooked up the DC-DC converter, I had to charge it up with a regular automotive charger every night.  I noticed the voltage was getting low even after just one day of driving, then when I hooked up the converter, I realized it was causing a much higher load on the main battery pack than I was expecting.  Just to refresh you, the DC-DC converter takes power from my big 230 volt pack and turns it into 13.9 volts to run all the original electronics on the car.  Power in equals power out, so when my gauges told me that 5.2 amps at 230 volts was going in, that seemed really high.  In fact, that equates to 77 amps, so something's definitely not right (230 x 5.2 / 13.9 x 90% efficiency = 77).  I checked the actual current coming out with a clamp meter and saw 45 amps going into the battery and only 16.5 amps coming out.  After the battery charges up a bit, that drops off, but it seems to always want to take at least 10 amps to float at 13.9 volts.  The biggest problem with this is it seriously eats into my efficiency.  4 amps or so turns into 4 Ah at the end of the day, which is about 20% more than I was using before I hooked up the DC-DC converter.  Time for a new battery.

The battery in all gas powered cars needs to be big enough to pump out 600 amps or so to get the engine started.  I don't need that, so I saved some weight with a little 18 Ah AGM deep cycle battery.  That should be enough to drive for 45 minutes normally on just the battery, and around half that with the headlights on in case of some sort of problem.  And here it is!  Isn't it cute? 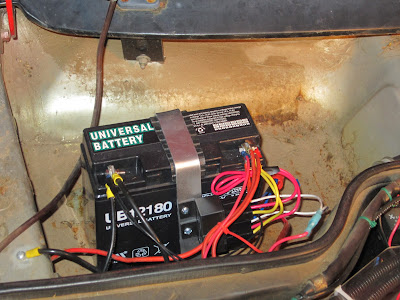 Here's the original for comparison. 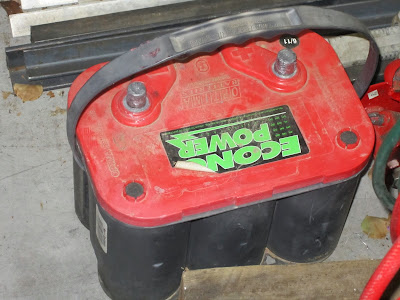 After hooking it up, the current draw is down to 18.5 amps in, 16.2 amps out, which seems about right.  From the HV pack it's around 2.1 amps, and today on my first drive with the new battery I saw a 3 Ah improvement in my power consumption.  My next efficiency improvement will be a vacuum switch that will shut off the pump 95% of the time.  That should cut the current draw to about 0.7 amps and I should be pretty close to the original efficiency I was enjoying this summer.

So the whole purpose of this post was to talk about my BMS and I haven't even got there yet.  Sheesh, I can't believe you're still reading.  Another quick refresher on the BMS is that it keeps track of the voltage of all the batteries and makes sure they stay between about 2.60 to 3.65 volts.  I started designing the system about 8 months ago, got the wires in place about 5 months ago, finished the circuit boards 4 months ago, and finally got it all hooked up about 2 weeks ago.  I came across a post from back in June where I was optimistic it'd be working within a few weeks, ha!

Apparently I'm way behind on showing you this stuff, so here's a quick summary of where I've come.  Here's the master and 3 slave boards all hooked up to the LCD.  I'm testing a 3 cell battery on it. 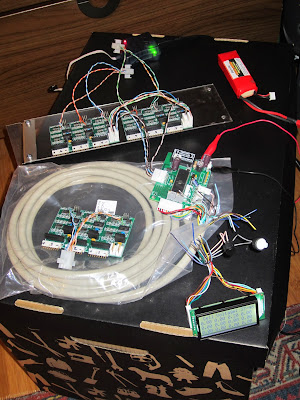 Here I've got the master and one slave hooked up to the all the cells under the hood.  They're all out of calibration right now. 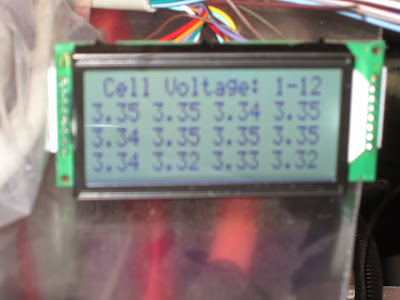 Here's what I spent a few nights working on, it's the code for the system.  The master has it's own code, then the 9 microprocessors on the slaves (3 each) have their own.  Unfortunately, due to a number of reasons, the #6 and #9 micros have a slightly modified code from the others. 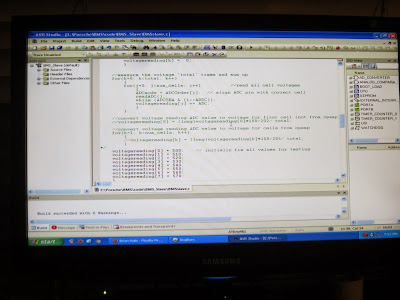 Like I said, I got it all hooked up a couple weeks back and started to test it out.  Initially I couldn't get it to work at all, but I soon realized that in the process of modifying and cleaning up Joe's code (his isn't quite the same hardware as mine), I made it a little "too clean" and it didn't work.  I almost forgot, that since I don't have a laptop I had to drag a spare desktop computer out and set it up on a table next to the car in order to program everything!  And pretty soon it got really annoying after doing it for the 5th evening in a row, but now it's all working and calibrated...well, sort of.

I works great when the car isn't on, but when you start up the motor there's so much electronic noise being emitted that the signal is totally messed up.  I've got shielded wire, but that doesn't seem to be helping enough.  Joe lent me his oscilloscope and I tried to find the problem.

Here's what the signal looks like when everything is working fine.  Not super clean, but clean enough. 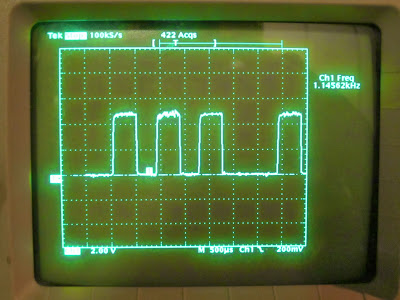 Here's what it looks like when the motor is running.  You can't even tell it's a square wave. 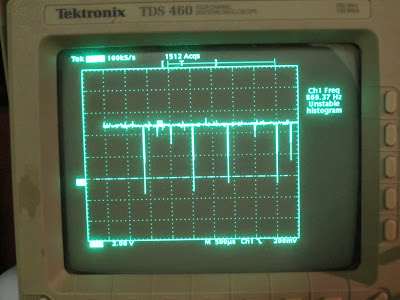 And here it is with the charger running.  Definitely a square wave, but kind of dirty looking, which must be confusing the master board.  A simple filter should fix this. 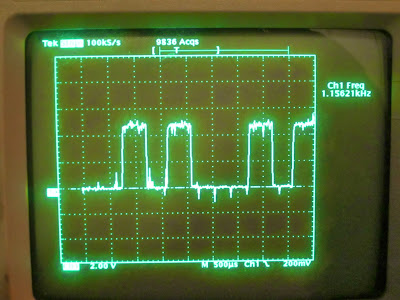 I hooked up a 4.7 uF capacitor to the master bus line and it didn't seem to do anything, so I bumped it up to 47 uF and then 100 uF.  Then I took another look at the schematic and realized I hooked them up in the wrong spot...doh!  I fixed the connections on the cap and got a flat line...too much capacitance.  I backed off to 4.7 uF and this is what I get.  You can see the wave never actually gets up to 5 volts even with a long space in between the pulses.  Still too much capacitance. 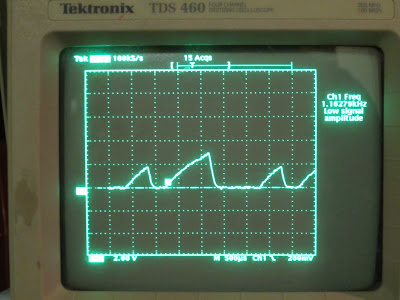 Here I've backed off to 0.1 uF and I still have the shark fins running across the screen. 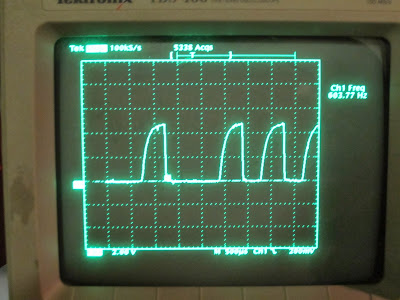 Unfortunately, the next size smaller capacitor I have is 20 pF, which is 4 orders of magnitude smaller than the last one.  Here you can see it's not enough capacitance because it doesn't look much different than before. 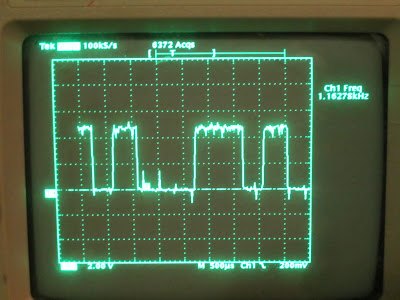 Tomorrow I'll have to stop in to radio shack to find a few caps to fill the gap in my hoard.  I'm doubtful my $1.30 purchase will be very exciting for them, and they probably won't know what a capacitor is even though they'll insist on helping me, but somehow they'll still stay in business.  Well, that's enough rambling for one evening.  I'll try not to go 6 weeks before the next one! 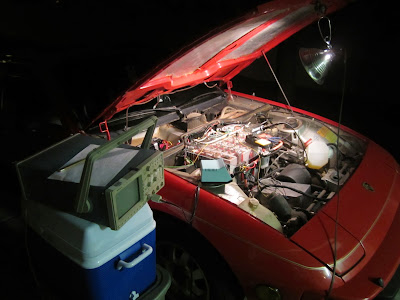