A long awaited day has finally come.  I have my batteries!  I planned all along to wait until I'd finished everything that was feasible to finish before ordering the batteries in order to avoid losing out on warranty time.  The car show has pushed it somewhat faster, so I still have a little work to go, but with any luck I'll be ready to start fitting them in the battery racks after this weekend.

They actually arrived a lot faster than I thought.  I ordered them on Tuesday figuring they'd come in next week, but they were actually at the Phoenix UPS freight center by 10:30 Wednesday morning waiting to be picked up! 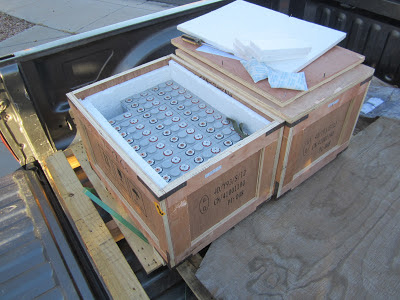 Ok, enough small talk, it's time to get technical!  A few weeks back, the 787 was grounded worldwide due to lithium battery fires on a couple planes.  Ever since then I've been fielding questions about when my car is going to "inevitably" burn itself into a smoldering hole in the ground.  Well the answer to that is hopefully never, but I have a few reasons to say that.  To start, there are a couple different varieties of Lithium-ion batteries out there.  For years I've been flying RC planes on what we always called Li-po (lithium polymer) packs.  I'm not sure if there really is a difference between the polymer or ion names, but I think they're pretty much the same thing.  These have a lithium cobalt oxide (LiCoO2) cathode and have the highest energy to weight capacity out there.  Each battery has a single cell nominal voltage of 3.7 volts.  Well, all the cell phones, laptops, and now planes that have caught fire also have this style of battery.  In the last 4 years or so, a new type of lithium ion battery has become economically viable, and that one has a lithium iron phosphate battery (LiFePO4) for the cathode.  If you look up LiFEPO4 on wikipedia you'll find some comparisons between the two.  The LiFePO4 battery is 14% heavier for a unit of energy storage, but is inherently much more stable then the LiCoO2 cells.  They have a nominal cell voltage of 3.2 volts, and are more environmentally friendly to their cousins without the cobalt.  I'll let you read more if you want, but it's supposed to be a superior technology.  So why didn't they use that on the 787?  Well, they probably picked out the battery 10 years ago before this type was really available.  Unfortunately, changing battery types at this stage would probably lead to a year's delay in getting the planes back in the air due to the lengthy process required to certify stuff on planes.  At any rate, enough about the aircraft industry, let's get back to my car!

In the last post I listed all the stuff I need to get done in order to be ready for the car show on the 20th.  Since then I've finished 60% of the battery racks, mounted the heater core (for cooling the controller), removed the motor and modified the flywheel adapter (it now has a runout of a mere 0.0004 inches), and reinstalled the motor.  This weekend I need to finish the battery racks, get the liquid cooling system all set up, and mount the vacuum pump.  I also out to tie up some loose ends with the controller.  If I can get that all done, I'll be on a good path to do a first test drive in 2 weeks!  Just in the nick of time to make the show.  Let's cross our fingers that I don't run into any insurmountable snags.

Alright, here's the part you've been waiting for...pictures of the progress.  Here's the interior almost all put together.  Still quite a few things to touch up here, but way better than before. 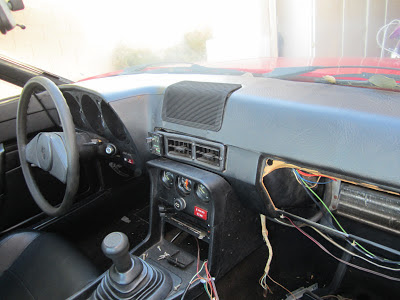 Here's a single cell for my battery pack.  I also got a bag of stainless fasteners and bus bars to hook them all together. 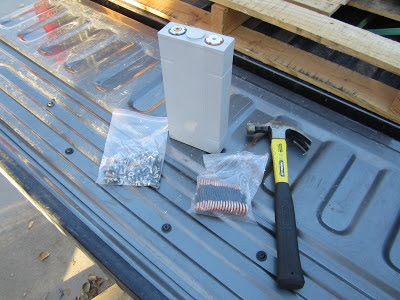 Here's the heater core turned into a motor controller cooler.  Took me forever to figure out where to put this, (I've been thinking about it for literally months) and finally figured it out.  It's hung in the perfect place right in front of the AC condenser. 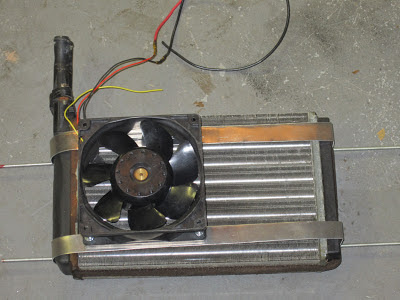 I've got a lot of work done on the racks but apparently I didn't take any pictures yet.  Too bad, I was hoping to work in the line "nice rack" somewhere.
Posted by Micah at 3:02 PM