The other day I proved that my electric car has enough power stored up to spin the tires.  Unfortunately for me, it was a total surprise!  We'll start with a little back story.  Whenever I start moving the car, it tends to bounce forward and backward slightly.  In most geartrains, there is a certain amount of backlash and wind-up that is the cause of this.  At first it seemed a little odd to me, but I've convinced myself it's not because of the controller.  I'm fairly sure the reason a regular car doesn't do this is that the engine is always spinning, and small amounts of friction keep the whole geartrain loaded up.  In the electric car this isn't the case, so when the motor starts moving, it kind of bounces against the load of the vehicle since it momentarily spins up without any load and runs into a brick wall when all the "slack" is taken up.

Okay so enough back story.  The other day I put the car in reverse and am convinced I can keep this bouncing from happening if I ease onto the throttle slow enough.  I'm pushing on the pedal, a little further...a little further...then all of a sudden SKREECH as the tires tear loose! I quickly pull my foot off the pedal and the car stops a split second after it started.

Now at this point I'm worried that I already blew up the controller that took me 3 months to build a short 9 months ago.  The way these controllers work, the unfortunately most common failure mode of the switches is shorted, or full on.  If that happens, that means you get 100% battery power to the motor, which in my case would be 230 volts and likely over 1000 amps.  The switches are likely not rated for this kind of power and they blow up a few seconds after your car tears off into another car in the parking lot.  In my case, either the controller hardware protection, the feedback control system, or my cat-like reflexes limited it to a foot long stripe of rubber in my driveway. 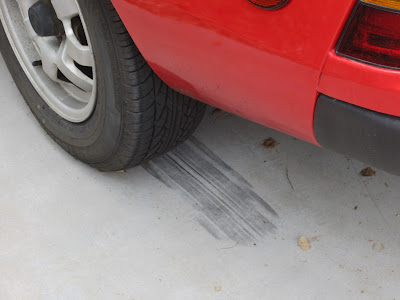 After a little while I determined everything was okay and I drove to work without another hiccup.  Now I'm asking myself why this happened and how do I avoid it in the future.  I actually had this happen one time before a month or so back, but I thought maybe it had to do with the bouncing.  I came up with another idea which turned out to be true, and here it is.

The controller gets a signal from a potentiometer that changes resistance as you push the pedal down.  The controller reads the resistance and equates that to a % throttle input.  There's a dead band at both ends of stroke to account for adjustments in the linkage and a few other things.  At the zero throttle position there is a limit switch.  I use that switch to turn a contactor (big switch) that feeds battery power to the controller on and off.  The purpose of doing this is that if something goes wrong, I can take my foot off the pedal and it will immediately cut off all power to the controller - exactly the scenario I just came across.  Many people eliminate this and would have to fumble around for a manual disconnect to stop the wheels from screeching, but my method is second nature to most drivers.

So here's the problem.  Remember that limit switch?  Well, I have to push the pedal down a short ways before that switch clicks and completes the high voltage circuit to the controller.  Well, on these two occasions I had eased into the throttle so slowly that I uncovered a problem with how I'd set things up.  The deadband before the current starts to ramp up is not quite big enough, so if done just right, the controller starts trying to drive a certain current before the contactor closes.  My attempt to ease into the throttle really slowly allowed this to happen, and I took so long the duty cycle must have risen higher than it's ever gone.  When the contactor finally clicks, that duty cycle is set until the controller senses the current has gone too high and rolls it back.  Of course, by then the wheels are already in motion.  (ha ha ha...)  Like I said before, luckily there are enough safeties in my system that the burnout only lasted a split second instead of tearing me out into the cul de sac and possibly wrecking the motor or car.  Even more lucky, the IGBTs were tough enough to endure this event unscathed.  And thanks to the design of the controller, after a couple minutes of snooping around I was able to reprogram the end points so the dead band is now big enough to work the way it's supposed to.  Something I should have done when I first set it up!

In other news, I got my cycle analyst back from Canada and am working on putting it back in the car.  While I'm at it I decided to fill in a gaping hole in the dash where there used to be a speaker grill.  Here's the hole in the dash. 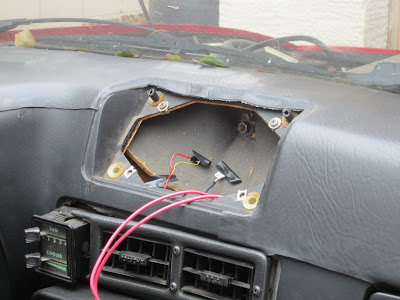 And here's the old grill and new cover that'll house some LCD screens and buttons.  Now I just need some flat black paint. 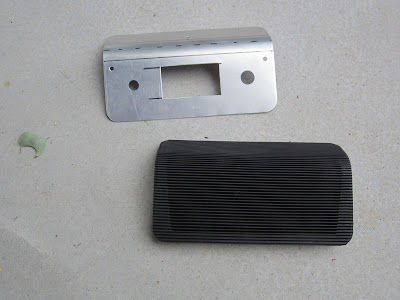