The Need for Speed

The other day I enjoyed my first trip in the HOV lane!  Here in AZ if you have a 100% alternative fuel vehicle you get access to the carpool lane even if it's just you in the car.  To make it better, it was a Friday afternoon during rush hour, so I got to zip past all the suckers in the regular lanes while they were all going 25.  Oh yeah and I've achieved a new max speed of 72 mph.

There's a guy at work who converted a Ford Fiesta to be electric about 20 years ago.  But due to his max speed and acceleration limitations, it was nicknamed the "Siesta."  Over the time it's taken to build my car, I've been teased with the need for a similar nickname for my car, but I've been able to show that's unnecessary.  And speaking of acceleration, I've been getting the itch for a little more recently.

WARNING: The rest of this post is getting a little nerdy (okay, a lot nerdy).  If you don't like math, this might be your cue to punch out early!  I've had a few new inquiries about how this works, so it seems worthwhile to go over all this.  I hope it helps some of you out there!

During the initial testing phase I settled on a few current settings that I've yet to change.  The controller has 3 parallel IGBTs rated for 400 amps each.  Without having to reprogram the controller, I can change the max current up to 833 amps in 8 increments.  I limited the controller to output a max of about 417 amps to all but eliminate the possibility that an imbalance in the load sharing could blow one up.  I also limited the battery current to 166 amps for no real reason.  Since the car works just fine like this, I didn't want to mess with things until I got the car registered to avoid a situation where I'd have to make that 48 mile trip to downtown Phoenix on a minimum amount of testing since if something broke, I probably wouldn't have it fixed until after the 30 temporary plate had expired.  Now I've got no more excuses. 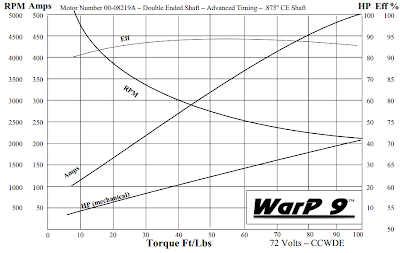 Now, the way it works, just increasing the motor current will improve torque at low rpm, but once you reach a certain motor speed.  The controller adjusts the % of time the switches are turned on (duty cycle) to control the amount of current going to the motor.  But the motor requires a certain amount of voltage to go a specific speed.  According to the chart, at 72v and 400 amps the motor will spin at 2400 rpm, whereas at 500 amps it will only spin 2150 rpm.  Furthermore, at 72 volts and 400 amps to the motor, my 230 volt pack will be supplying approximately 125 amps.  At 500 amps to the motor, the batteries are supplying 155 amps.  The controller allows the motor to produce a constant torque (corresponding with the motor current) until the duty cycle is 100% or the max battery amps have been reached.  Since I've set the controller to limit battery current to 166 amps, the rpm at which the motor torque will drop off will be quite a bit lower when the motor current is bumped up.  To compensate, I'll probably need to increase the allowable battery current.

I've harped on this before, but I love stringed instruments so much I'll do it again!  A lot of people out there want a car with huge acceleration, so they get an 11 inch motor (more torque per amp than my 9 inch motor), a 1000 amp controller, and 100 volts worth of 180 Ah batteries.  You will get lots of torque this way, but not for very long, resulting in a disappointed EV owner who's scratching their head.  The same math I showed above applies here, except it gets worse with a bigger motor because the motor.

Alright, ENOUGH boring stuff and back to the testing!  I hooked up the laptop and punched in "t-pos-gain 5" and my controller now maxes out to 521 amps to the motor (I'm sure you already knew that because t-pos-gain / 8 x 500^2 / 300 = max current).  Like I mentioned before, that roughly correlates with 100 ft-lb of torque out of the motor, where before I was getting about 67.  Man, does it make a difference!  I can also see how I need to boost the battery current limit.  In about 1 second you can feel the jerk, and for those of you who forgot your days back in Physics 1, the term "jerk" refers to a change in acceleration (wow, I'm feeling nerdier every second here).  So in about a second, my battery current limit is pegged at 166 amps and the acceleration quickly drops off, just as I'd predicted.

I've driven the car around like this for about 25 miles now and so far the controller hasn't blown up.  It's really easy to hit the battery current limit now, so I'm not getting full use out of the 521 amps to the motor.  Since this post is already way too long (man I love talking about math) I'll end this here.  And if you have any questions, please ask!
Posted by Micah at 8:31 PM