Air Conditioning Part 1 and BMS Repair Part 1 Too Many

I've had more trouble by far with one part of the car, and that's the battery monitoring system (BMS).  Two weeks or so ago over the weekend we had a big rainstorm here and I think my leaky hatch allowed a little water to drop on the two rear BMS slave boards.  Monday morning rolls around and the BMS checks the first 24 batteries and stops.  I'm not too concerned because I've had an intermittent issue with the power supply to the rear boards, so I just drive it in to work.  On the way home I have the hatch open to stow the sun roof so I wiggle the wires in hopes of bringing it back to life.  Well it came back to life, but now it's alerting me that something is wrong.  It does such a good job at getting my attention that I have to unplug the whole system to drive home cause it's so dang annoying!

I get home and take a closer look and it doesn't look good.  Lots of scorched areas (or carbon scoring if you're a Star Wars fan). 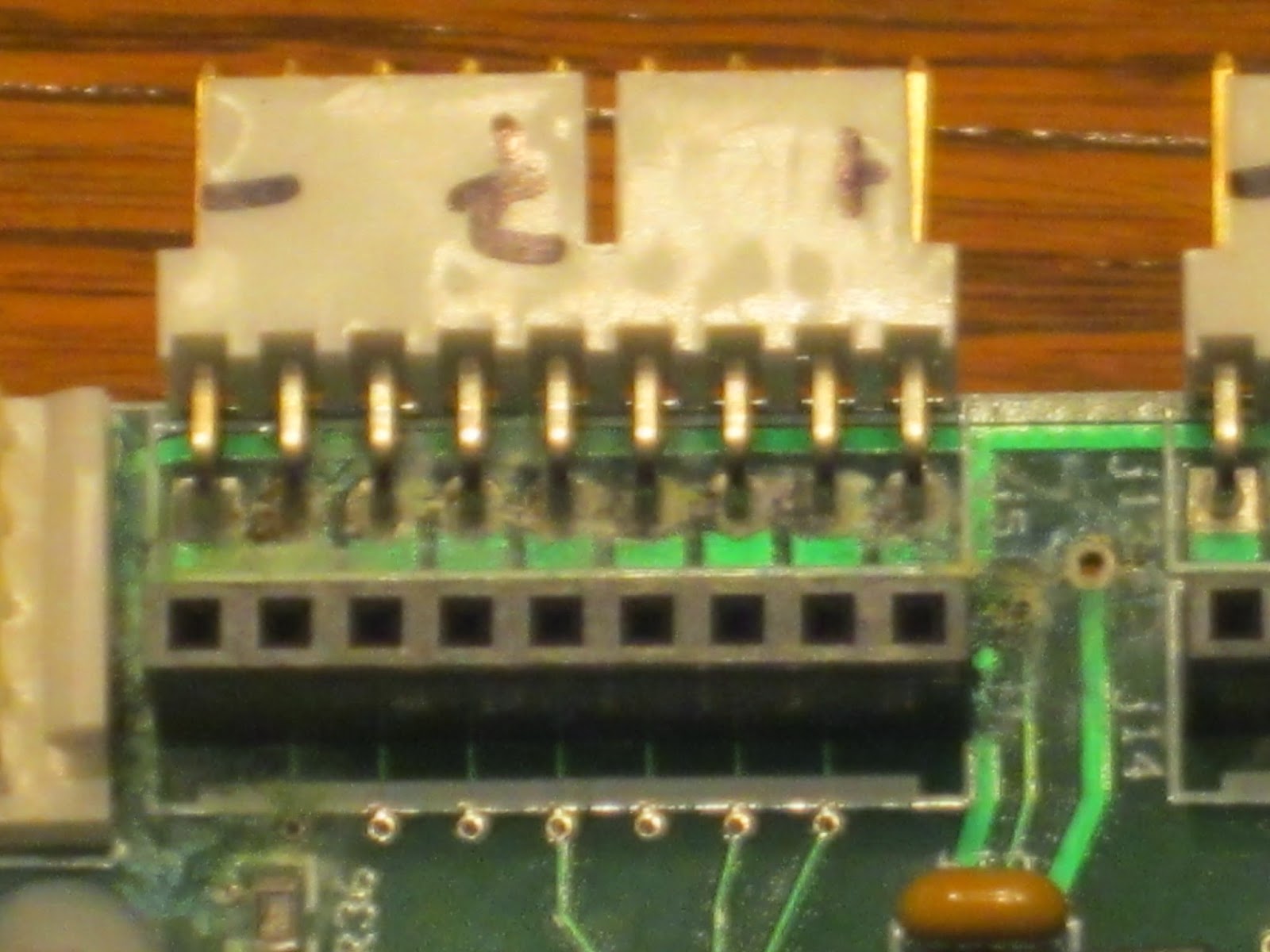 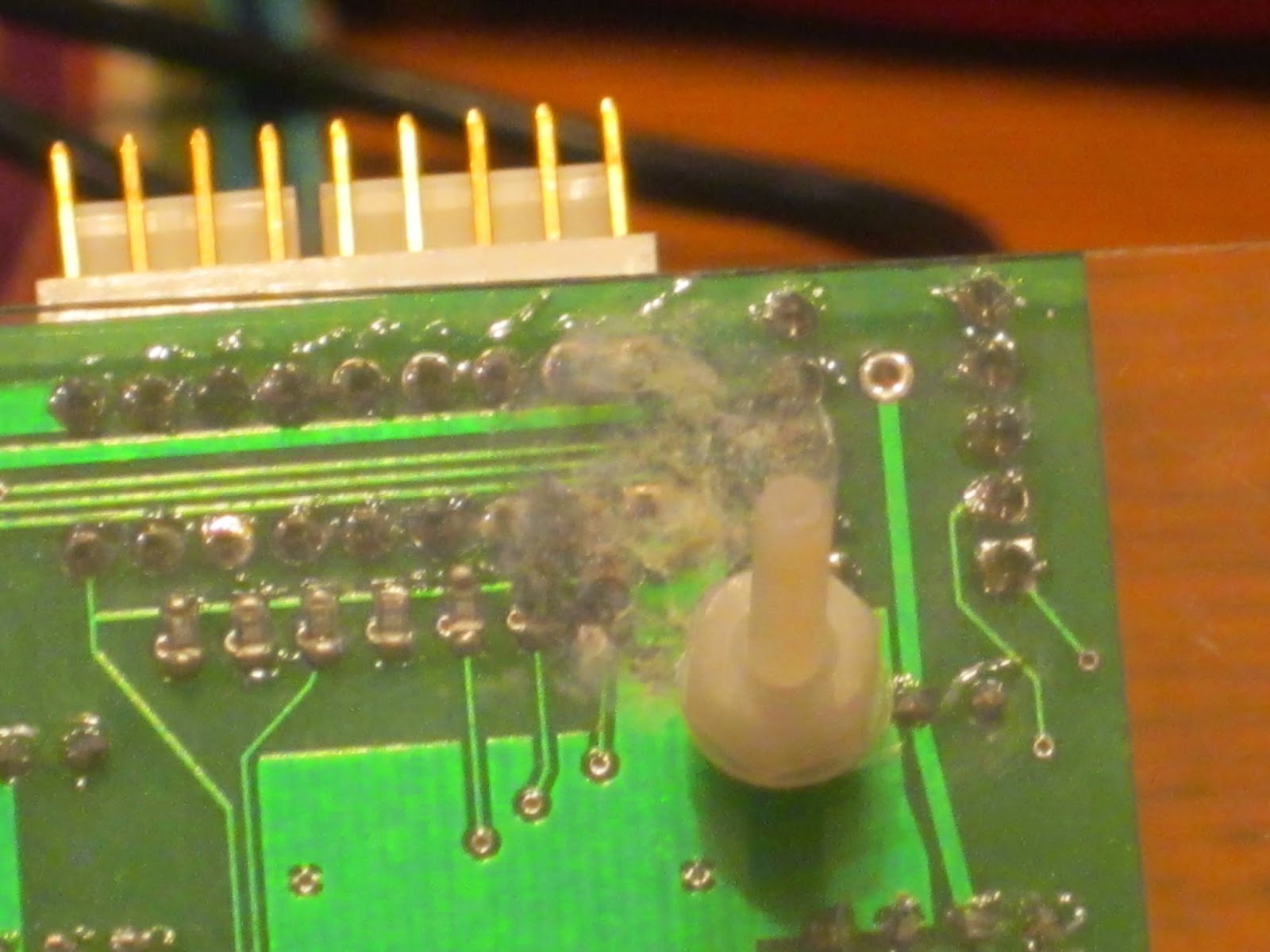 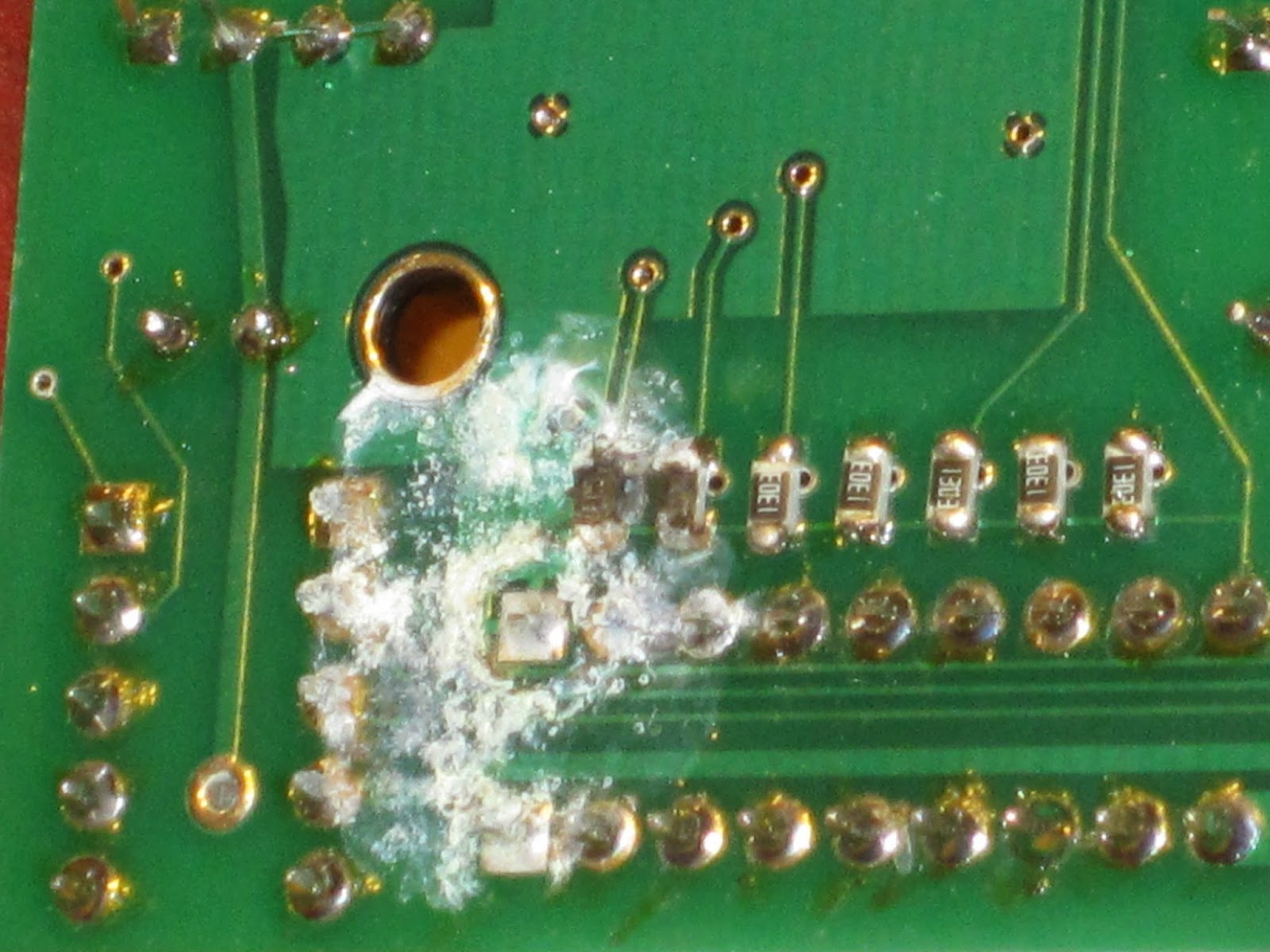 Yikes!  Most of that carbon scoring was superficial and must have been water boiling from current passing through it or something.  I get it all cleaned up and check all the parts that are easy to check and remarkably it seems like most everything is working.  I hook it back up, and alas, everything is not working.  8 of the cell voltages read as zero volts.  Long story short I figure out one of the traces was vaporized, so I replaced it with this jumper cable. 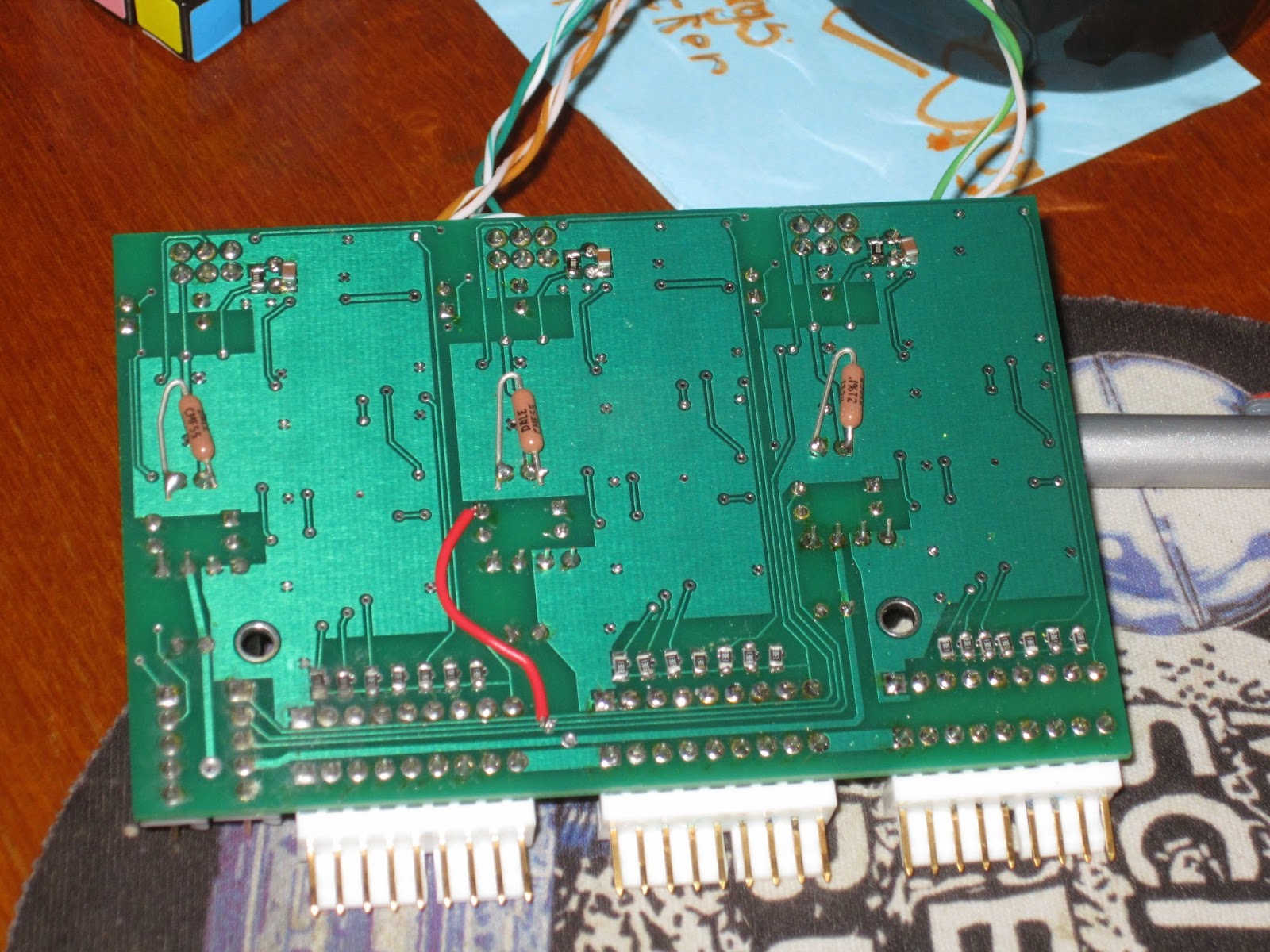 I hook it back up, and now the 8 cells read correctly, but there's another one reading too high.  I eventually deduce that a resistor somehow must be slightly low.  In fact, the resistance must have changed so slightly that it would be difficult to measure that change while on the board.  I was able to correct that by desoldering the resistor, cleaning it, and resoldering, and bam, it's all working again!  Amazing I was able to do that in just a few days and without an order to Mouser!

So now I need to make sure that never happens again so I have to figure out a way to ensure water can't get on there.  I scour the garage and come up with a plastic storage bin that, with a little whittling, fits perfectly over the top of those two boards.  And here there are! 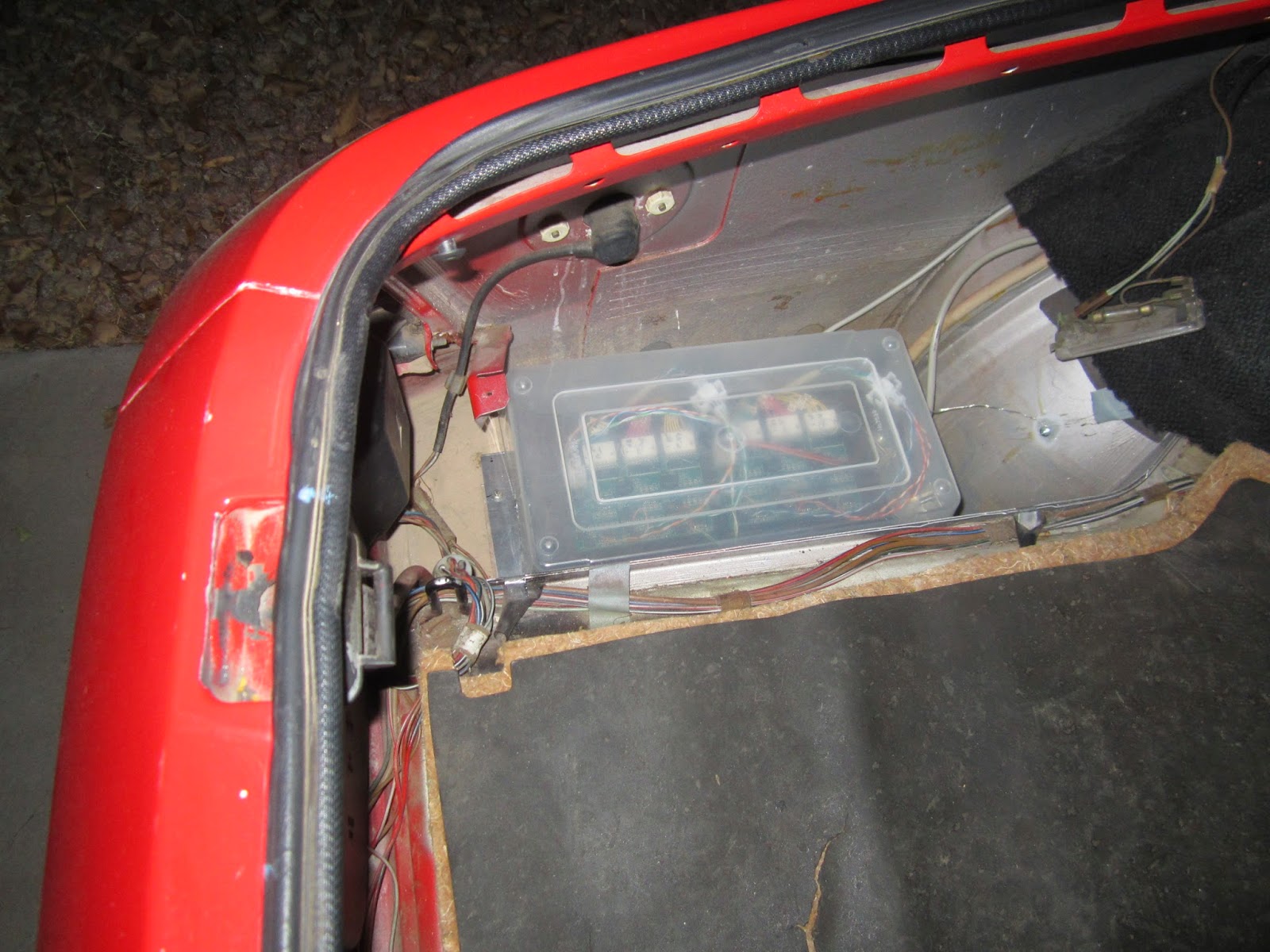 Now a lot of people ask me if I have AC, and my answer is always no, but it will by summer.  Well if you live in Arizona like me, you'll realize that summer is nearly upon us!  We hit the 80's a month ago, the 90's could easily be just around the corner, and if we're unlucky it could break 100 in a month.  I have no idea how long this is gonna take, so I probably should have started this 6 months ago.

In all fairness to myself, I have actually done a fair amount of work on the AC over the last 18 months.  In fact, when I started when I took the dashboard out nearly 2 years ago.  The problem is that the AC is an aftermarket unit (i.e. not covered by the manuals), it broke some time ago, and a previous owner left a mess of wires with numerous cut ends in there to confuse me.  If you turn the system on, nothing happens.  No fans, no clicks, nothing.  I decide to start by trying to get the blower fan working.  Of course, that's buried in a (hopefully) watertight kick panel that holds the evaporator.  When I had the dash out I never was able to figure out how to get it out so I could have a look at where the wires go, so here I am trying to figure it out again.

Luckily, with a fresh look, and a few years to mull it over in the back of my head, the wiring is actually pretty straight forward.  There's one mystery green wire that ends near the fuse box, which I correctly guess is the power supply for everything.  It actually turns on a relay, and I can make the relay click by applying 12v to green.  Now there's a 10 gauge dark blue wire coming from the relay over to a control box.  The controls are a slider that changes fan speed (0-4) and an ambiguous "cooler" slider that goes follows a tapered line.  I'm not sure if the coldest setting is setting "cooler" to the thin or thick end, but I can figure that out later.  The "cooler" slider mechanism has a temperature probe that goes into the evaporator to measure the refrigerant temp, and turns the compressor clutch on and off through a white wire leaving it.  I haven't checked yet, but hopefully that wire goes live when everything turns on.  The fan slider clicks in 1 of 5 positions, and there are a bundle of wires going off from it.  To control the fan speed, this switches in a series resistor to reduce the amount of current going through the fan motor.  The resistors are fairly low values and must run hot because the resistors are actually inside the AC ducts to keep them cool!

So that's where my problems show up.  I get 12v going to the switch, but the fan doesn't spin.  I figure out that one of the wires has a bad connection somewhere, so I cut the connectors off and put new ones on.  That's fixed, but the fan still doesn't spin.  I trace all the wires and can verify that I get 12v all the way to the last wire that I assume goes into the fan itself.  12v going in and no spinning must mean there's either another connection that's bad or the ground isn't hooked up.  Like I said before, it's really hard to see anything in there so I scour the forums for over an hour to try and find a clue on what's going on.  I never found the answer there, but I did eventually get on my back with my face pressed into the firewall and found what I was looking for!  There's a grommet on the left (driver's) side of the box that houses the fan and evaporator, and there's a red and black wire coming out of it.  And guess what???  The black wire isn't connected to anything.  I attach that to a convenient screw and the fan is roaring back to life!

Now that I know that's working, I only have one more major hurdle, and that's putting some electric fans on the condenser and shrouding it.  I've already built a mount for the compressor and have the belt and pulleys.  So a little wrench turning with a new compressor, a few wires, and I'll be ready to evacuate and charge the system and cross my fingers.  With a little luck I'll be cruising home with the windows UP before I know it!