I was thinking I hadn't blogged in a while, so I pulled up the site and realized I'd written most of this and never posted it!  I think I was waiting on taking a few pics before posting.  Whatever, enjoy and realize I probably wrote this sometime in June or July.


I've been driving with the AC working for a little while now so I thought it'd be interesting to share some info on how it's working out.  The biggest thing that's unique about how it works on my car compared to a normal car is that the AC compressor is driven by the main motor, so if the motor isn't spinning, the AC isn't actively cooling.  For example, when I'm stopped at a stoplight, it's like I turned the AC off for 30 seconds and just kept the fans running.  This wasn't a big deal when it was only 85 degrees out, but now that it's over 100, it starts to get a little warm if you have to wait through more than one light cycle.

Now there are a few solutions to this problem.  I can put the car in neutral and spin the motor with the pedal, but that's easier said than done.  It's hard to keep the rpms just right, and before you know it you realize you were concentrating so hard on keeping even pressure on the throttle that you didn't realize traffic was moving again.  Another idea is to fix the min throttle setting by modifying the resistance at the throttle potentiometer or voltage signal going into the controller.  That's a little worrisome to me though because you'd have to be very careful that you don't introduce a failure mode that could take your car out of control.  Ideally I'll reprogram the controller to maintain a minimum rpm (idle), but that's going to take some development.  For now I'll deal with the heat or work on my throttle skillz.

Another common question is how does using the AC affect my range.  Well, it takes about 10% more energy to get somewhere with the AC running.  So instead of 250 Watts/mile it's closer to 275.  That should drop my range about 5 miles.

The other thing I didn't anticipate was all the noise it makes!  With a normal internal combustion engine, the noise must be drowned out, but it probably doubles or triples the amount of noise in my car.  Also, I'm used to cruising at higher rpms, but judging by the sounds it makes, the compressor likes it a little slower.  So I've started using 4 gear again and shift at lower speeds.  Then when I'm creeping to a stop I tend to pop the car out of gear before I'm getting too slow because there's a fair amount of vibration that happens if the compressor is spinning abnormally slow.

When I first got the AC hooked up, I did like I normally do and got it 98% complete and didn't bother finishing it off for a while because it was functional.  Well, the last 2% in this case involved one wire that turns everything on.  When I got the car, this mystery wire was just dangling behind the dash and had been cut off from somewhere (still unknown).  I later discovered that if you apply 12v to it, it turns on a relay that powers the blower fan that flows air through the AC ducts and powers the control unit.  The way I half-assed this one was to wirenut an extension wire to the end, then clip a jumper wire to a 12v supply.  Of course that supply is always active, so I have to unclip it every time I stop the car or it'll drain the battery.  I finally properly wired it into an ignition source so it turns on when you flip the key. 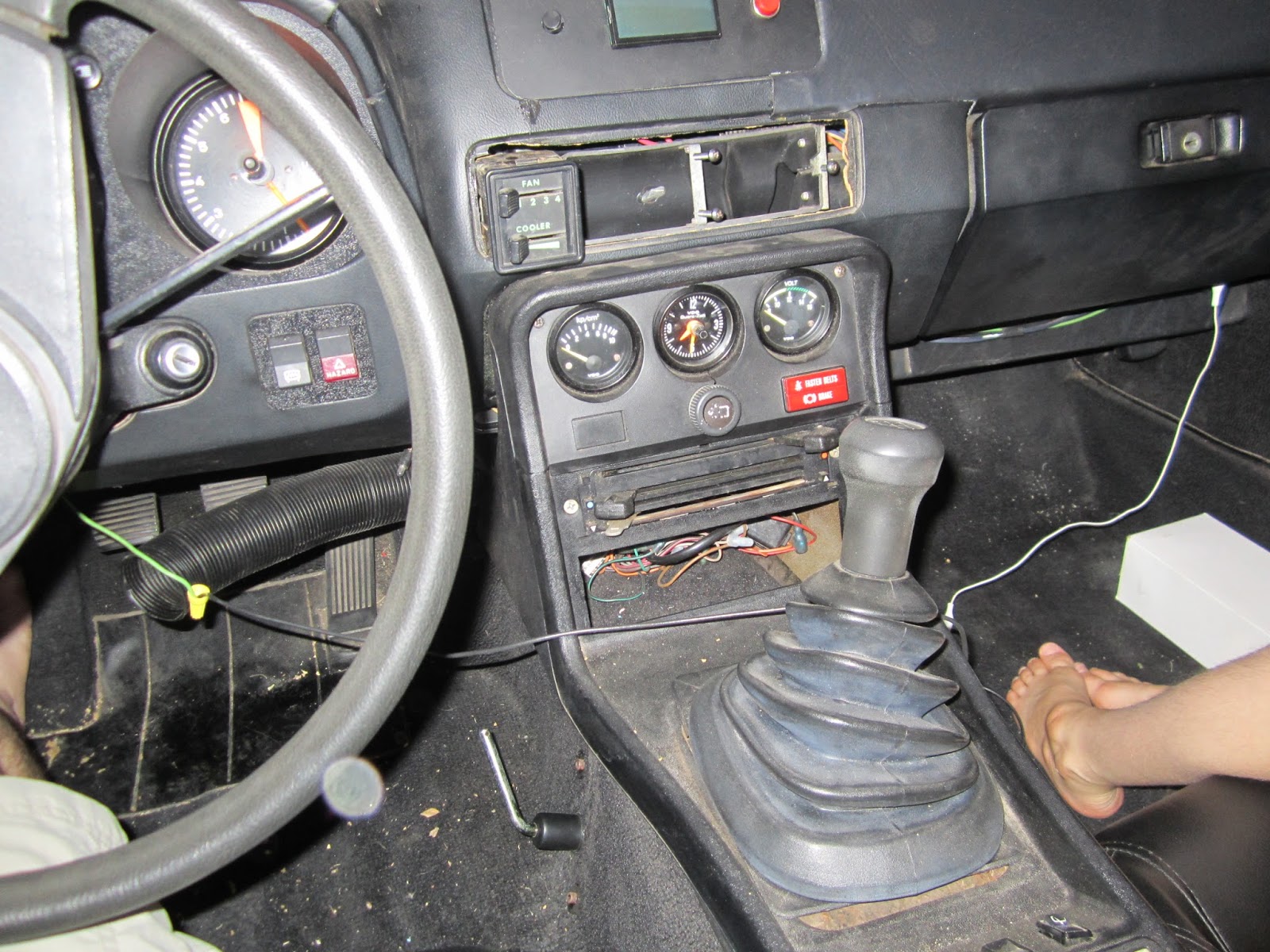 Well, I finally got to 99% complete and now the car looks like this!  I finally hard wired the power to the ignition and I found a replacement center bezel in with the two vents and controller on ebay. 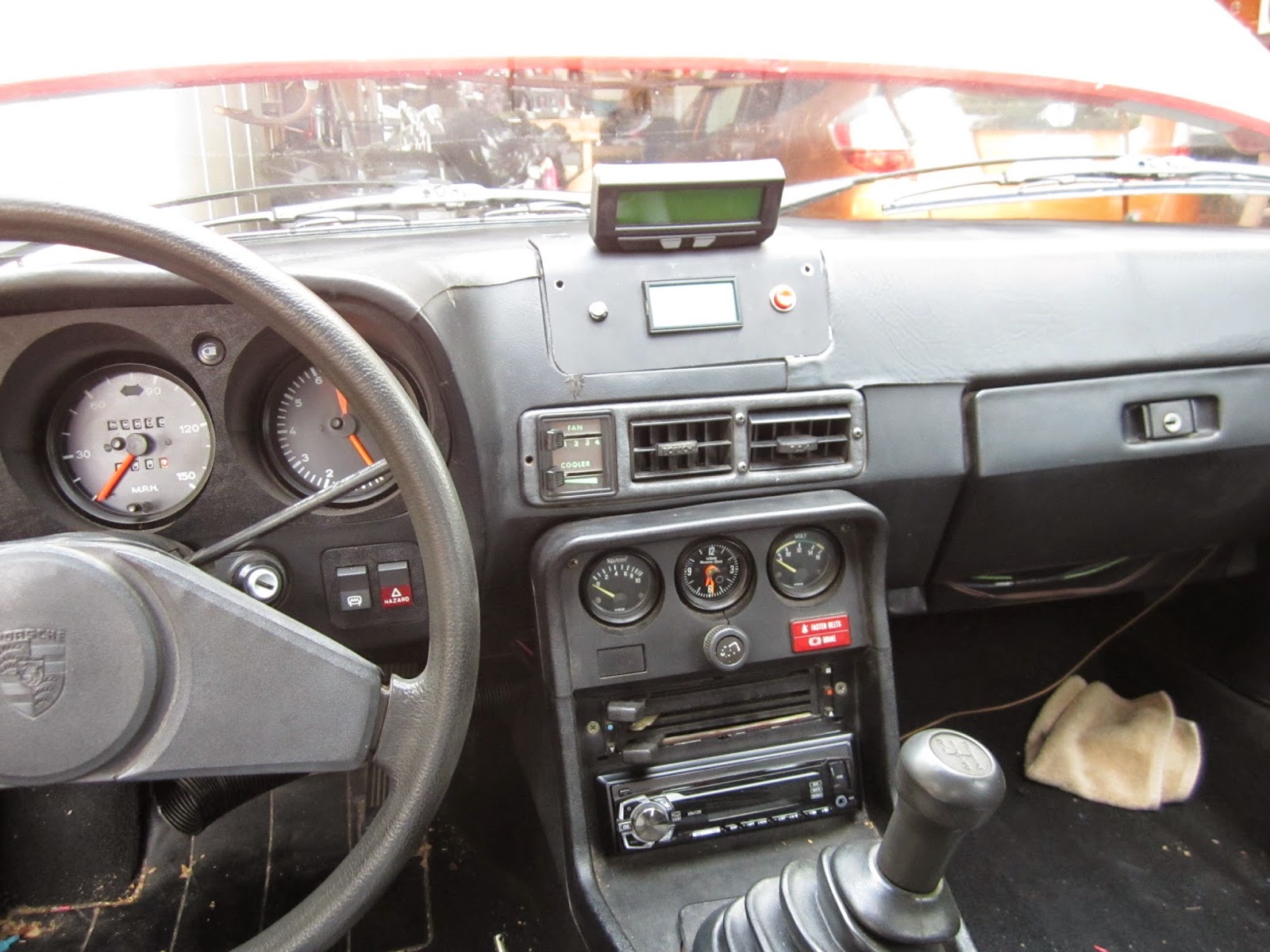 I also wanted to hook up more than just those two center vents, so I ran some ducting to the left of the steering wheel and the crotch vent I've been dreaming of.  Oh yeah! 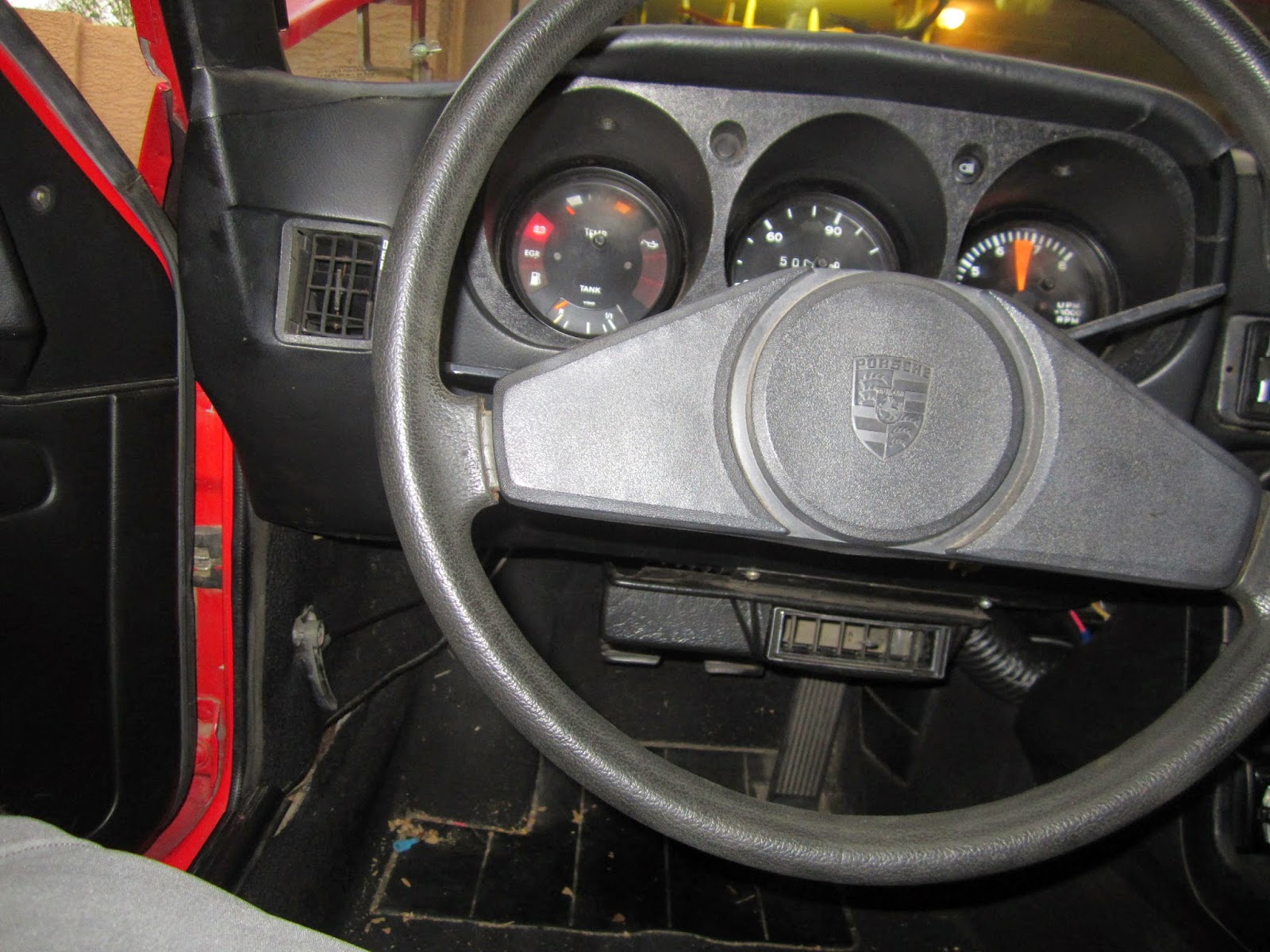 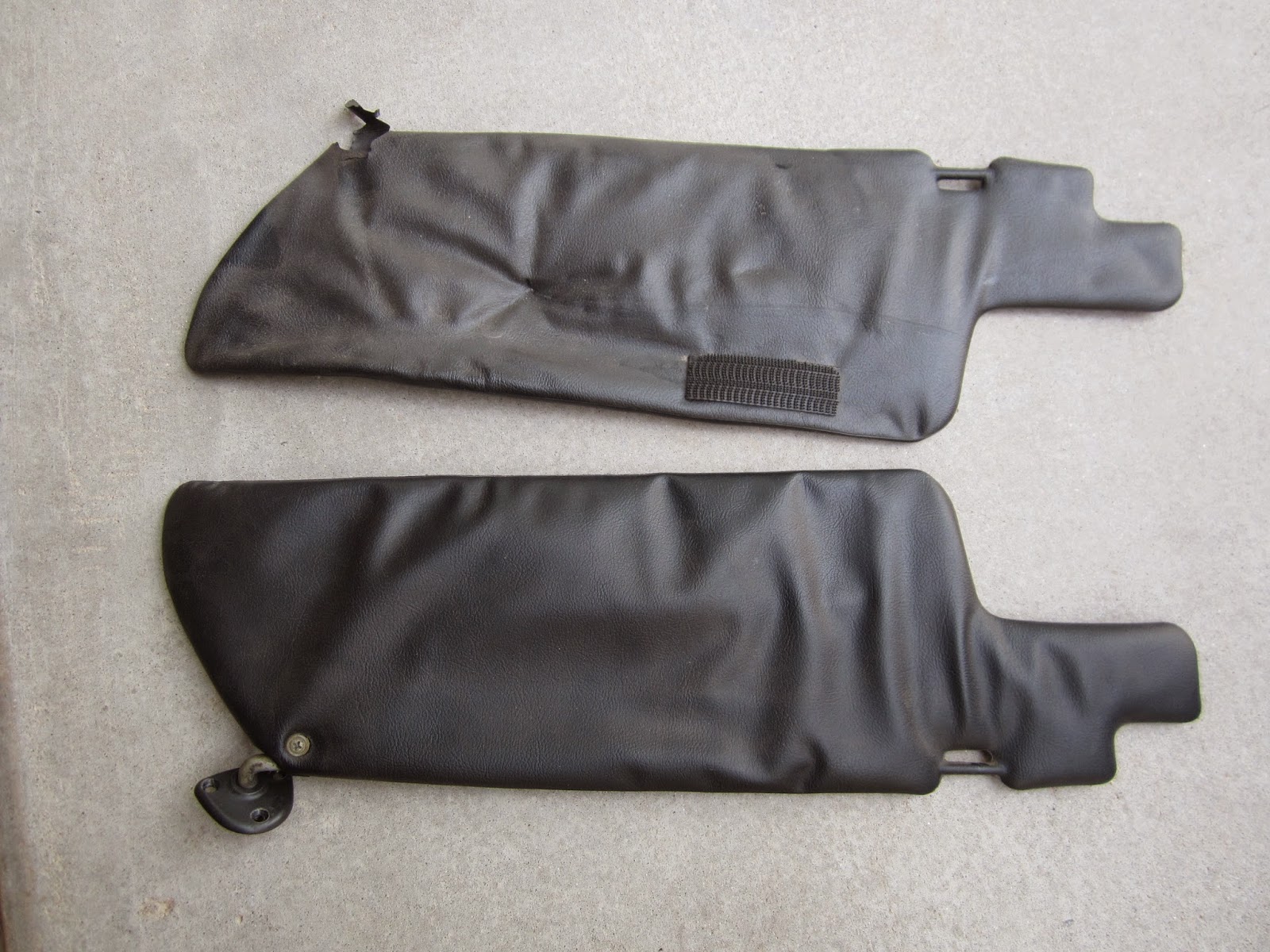 With these nice new visors. 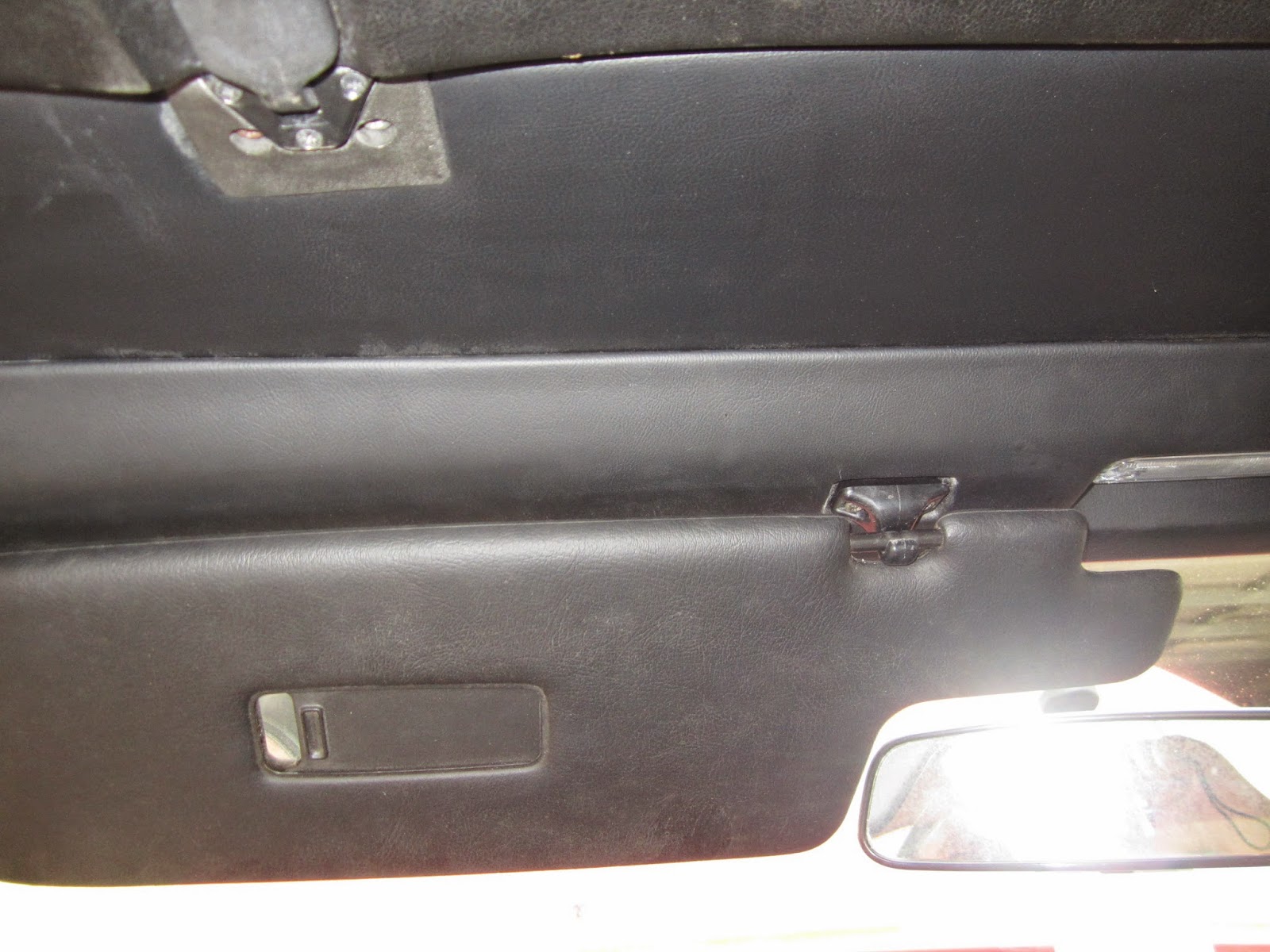 Another problem I've been working on since about April is that my headlights stopped working.  I know I had headlight problems around October of last year, but back then the lights didn't want to pop up.  Now they don't want to turn on.  Over the last year or so I've really struggled trying to understand the "current flow" diagrams in the Haynes manual, but there are a few symbols and notations that never really made sense to me.  Well, after 2 hours of looking at it last night it all suddenly clicked and I instantly narrowed in on a problem with my ignition switch not sending power to the lights.  Luckily it's another VW part that goes for $10 so I'm back in business with working headlights!

Now that summer's cooled off, I feel a little more motivated to work on the car.  So maybe in the near future you'll get to read about my 240v outlet, fixing the clutch, fixing the transmission input shaft seal leak, or who knows, maybe I'll even finish the last 1% of the AC system!
Posted by Micah at 9:20 PM