I've had another day to work on the car and made some good progress.  Last I showed you, the driveshaft was high compared to the motor shaft.  I took some closer measurements and it's hard to tell, but I've estimated that the shaft is about 0.045 inches off center. 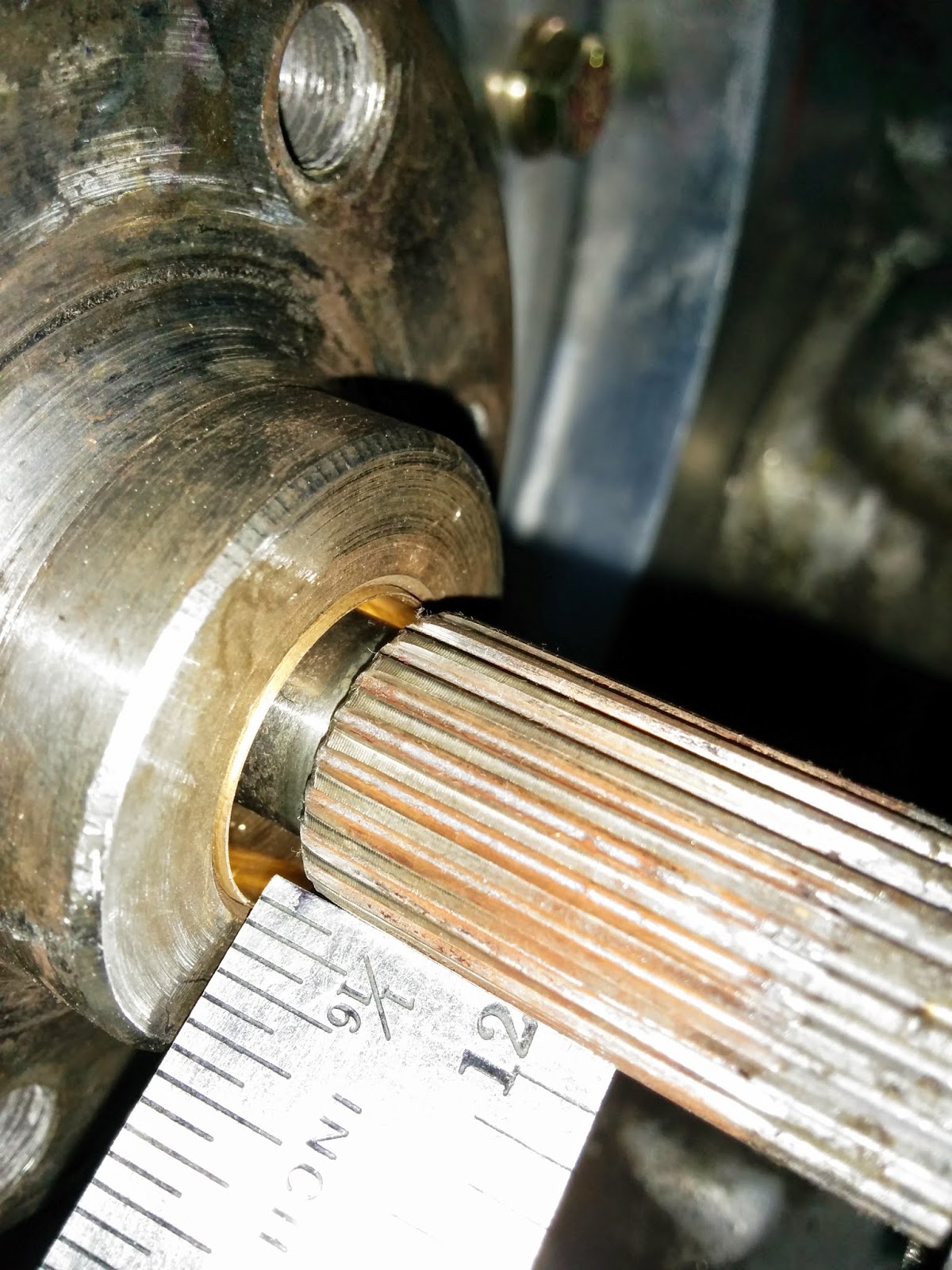 The bellhousing and motor adapter are located to each other with alignment "sleeves" at two of the bolt holes.  These locations need to be moved by 0.045 inches, but that's easier said than done.  I decided to punch out the alignment sleeves and replace them with relocated pins.  You can see the two housings here. 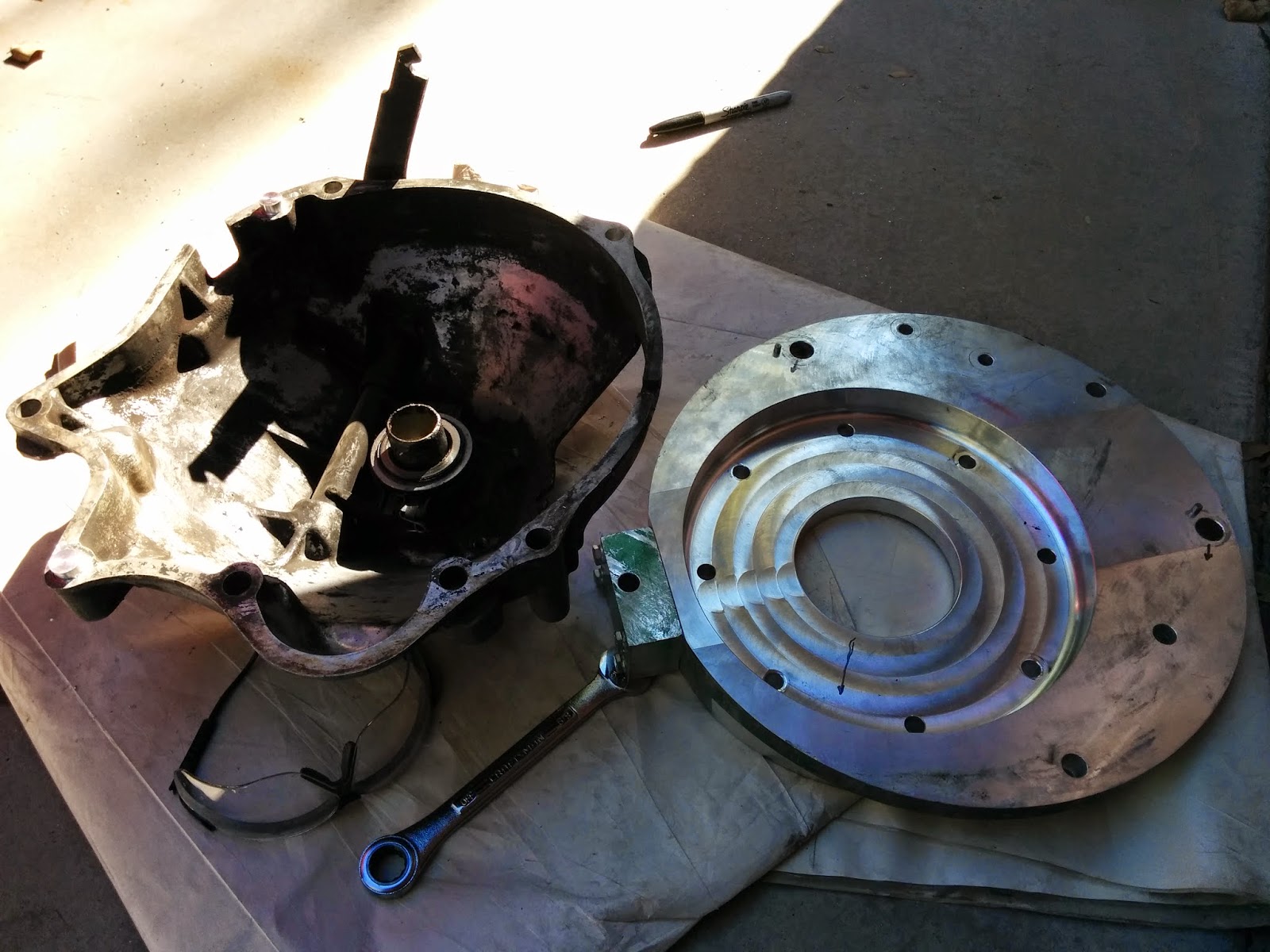 Getting a pin pressed in the adapter and aligning it with a hole in the bellhousing in the perfect spot is a little tricky.  I finally decided I'd make a couple special plugs to do it.  You can see them in the picture below.  Each one has a diameter that tightly fits to the locating hole in the bellhousing.  Then the diameter of the other end of the plug is 0.090 inches smaller than the corresponding hole in the adapter plate.  That way I can put them together and shift the adapter plate within the clearance of the plug in the correct direction.  Since the radial clearance is half the diametral clearance, it should move 0.045 inches.  The plug on the left is in the alignment hole.  You can see the two diameters on the loose plug on the right. 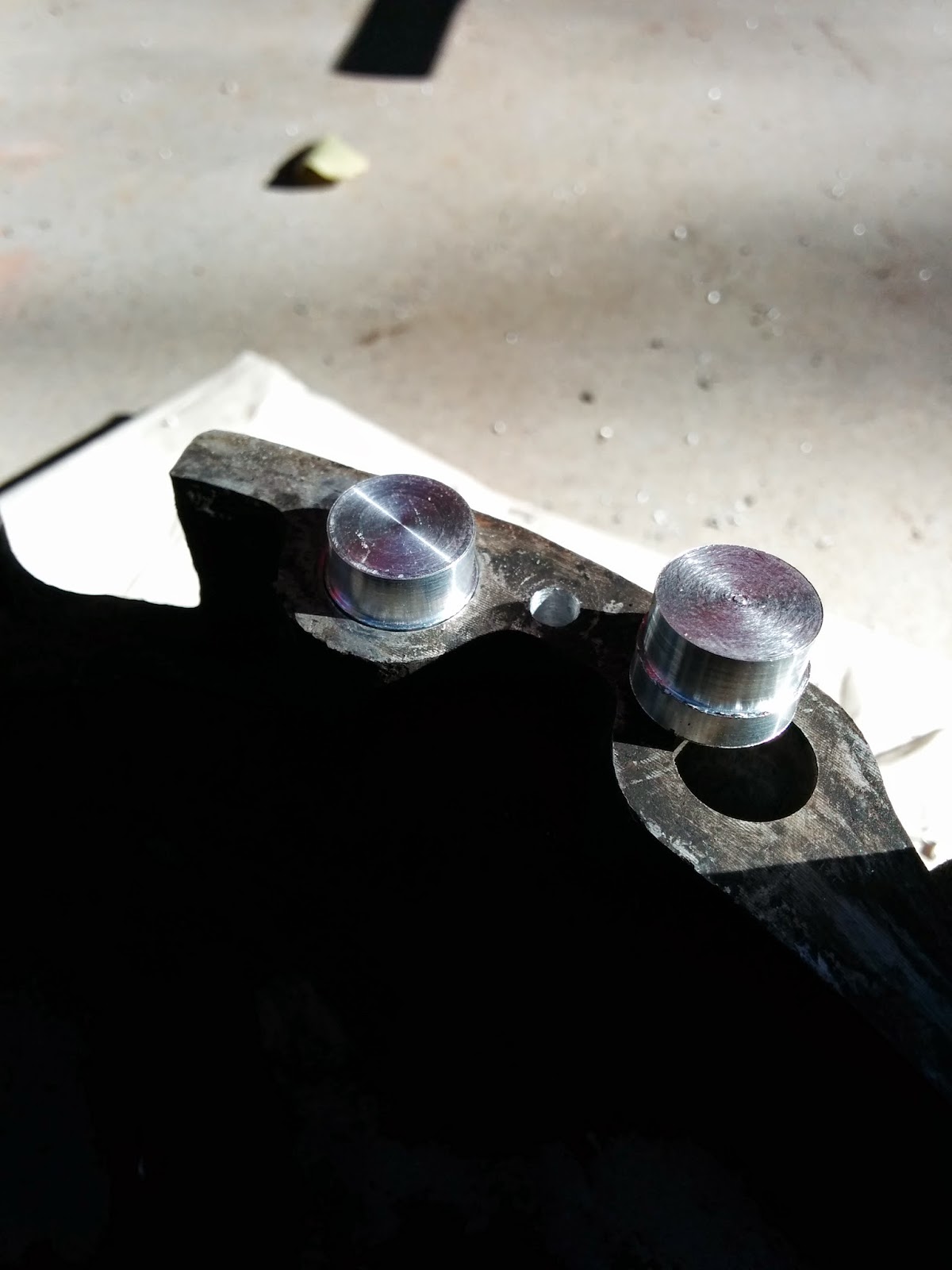 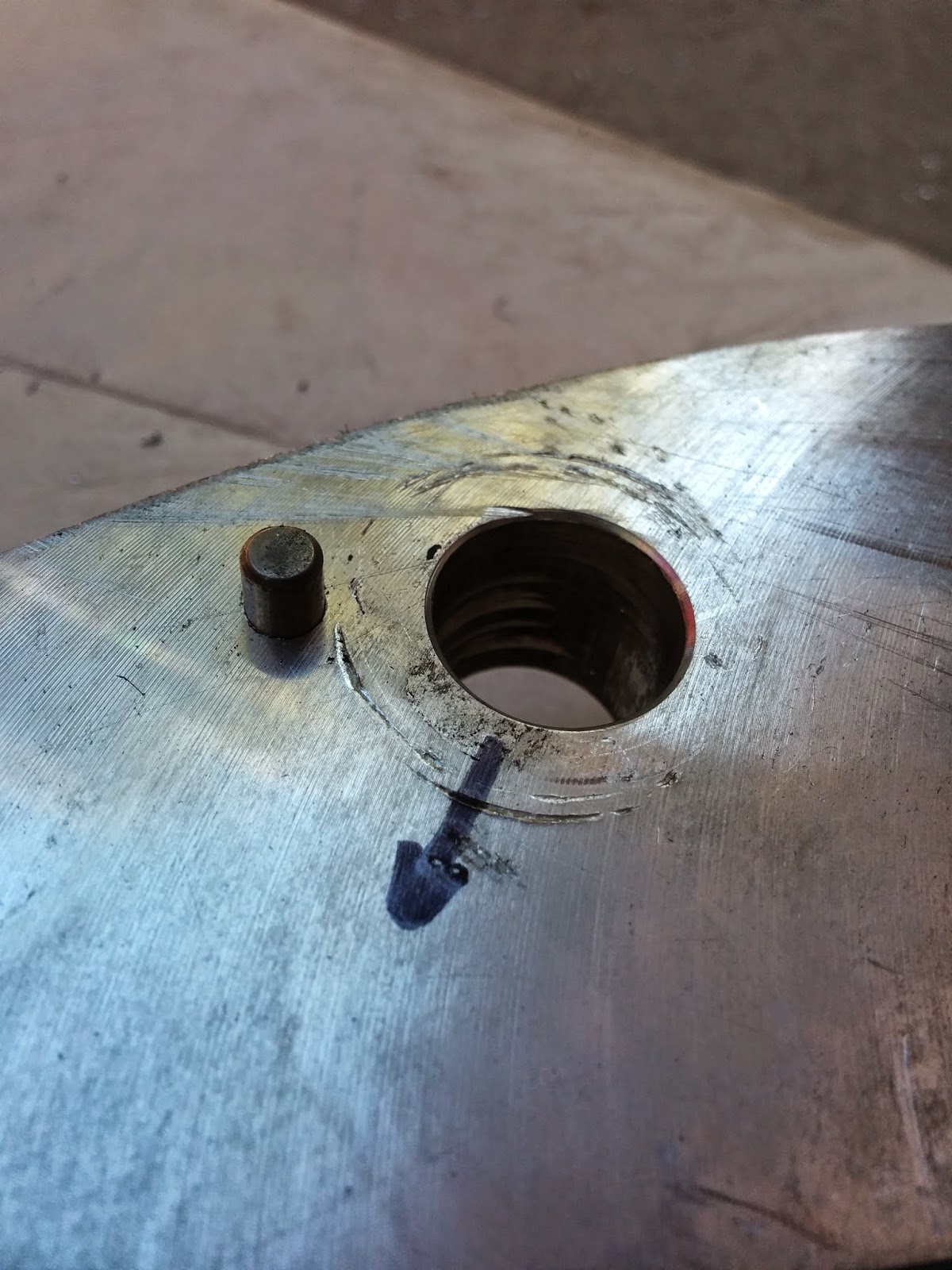 Now it's time to test the fit.  I put the adapter plate back on the motor, put the bellhousing back in the car, and put the motor back in with it.  The bolt holes that hold everything together have enough clearance that the bolts still fit through.  And here's how the shafts line up after the new alignment.  Not perfect, but a huge improvement.  I was able to shift the joint between the bellhousing and the driveshaft tube just enough that it looks perfect to the eye.  Considering 0.045 looked pretty bad, I think it ought to be good enough. 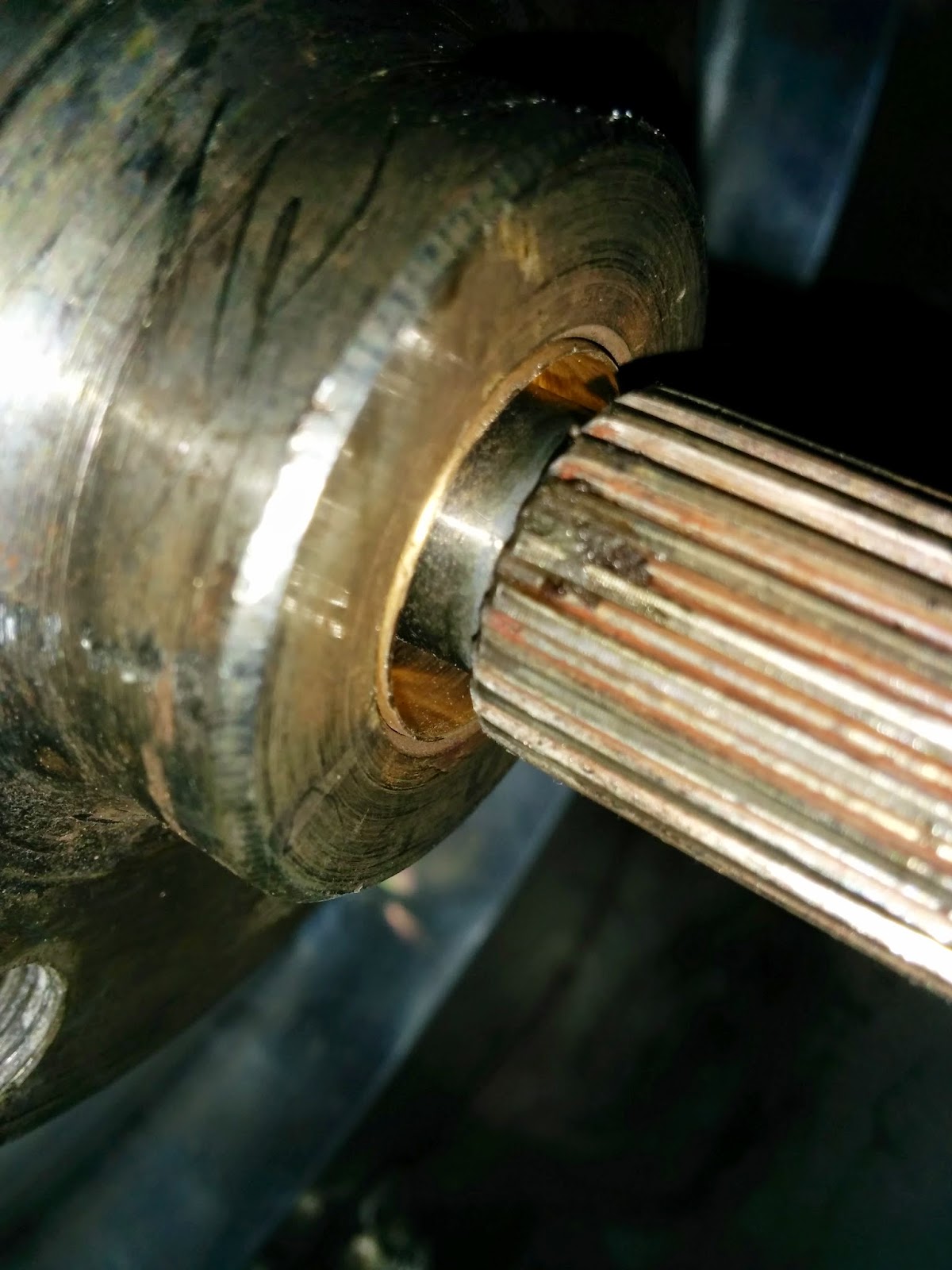 So now it's time to put it all together again.  I pressed the pilot bearing into the coupler (shown below), lubed it up with some bearing grease, and remounted the coupler, flywheel, new clutch disc and pressure plate.  Then I put it all in the car along with a new throw out bearing. 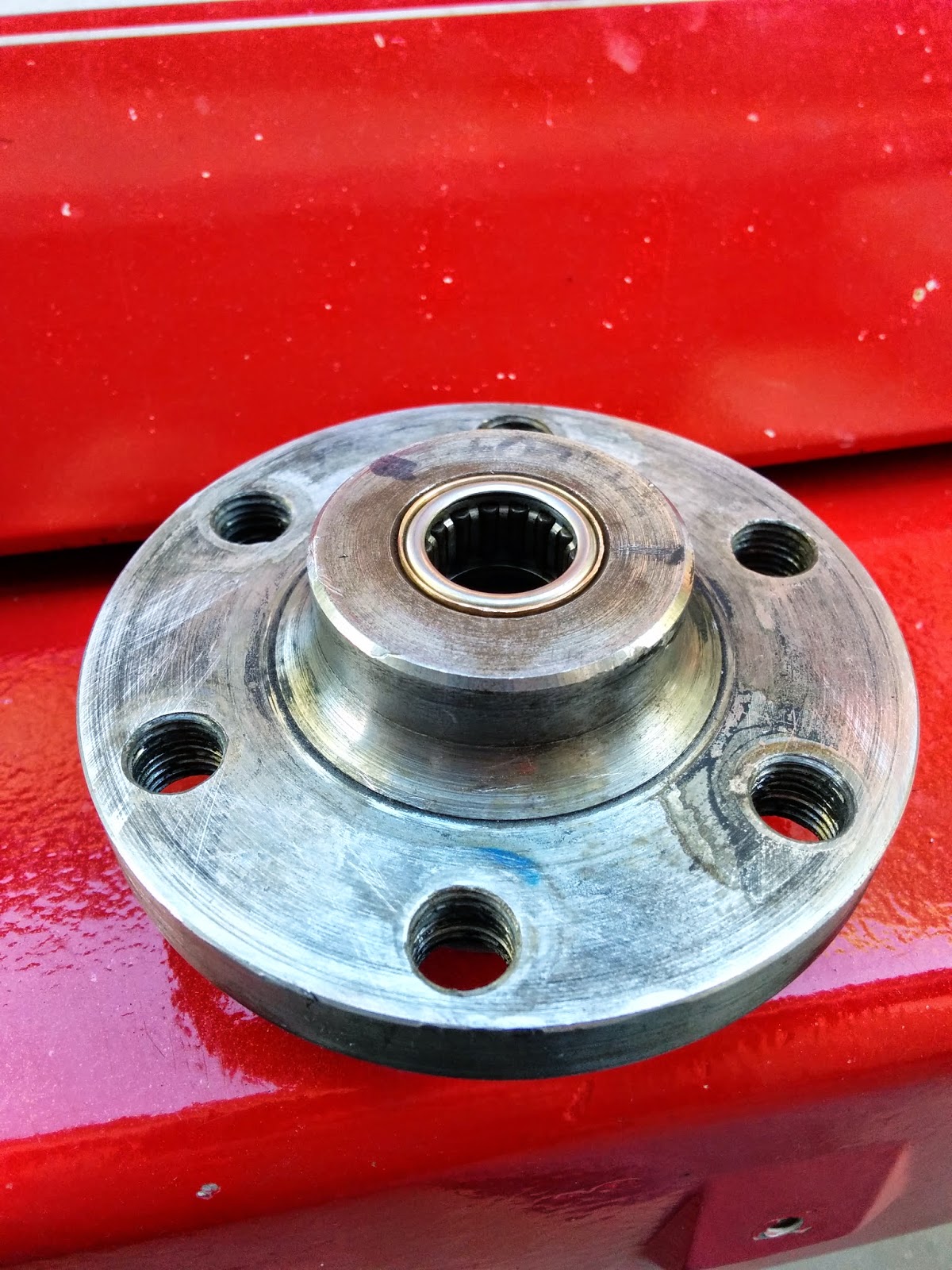 By this time I've put the motor in and out of the car about 4 times in one day (not counting the dozen times I did it the last time I was trying to fix this problem) and I'm really hoping this is it.  Two years ago when I spun up the motor, something in the driveshaft assembly (probably a bearing) made this nasty, loud, clacking noise.  This time I hooked the motor up to 12v and the spinning makes a noise more beautiful than a chorus of angels playing harps!  No laugh of a child, purr of a cat, or chink chink chink of coins dispensing from a slot machine could melt my heart that day like the soft whirring of the brushes in the motor did.  This problem was in my top 3 issues making the car a pain to drive.  Time to finish putting the car back together and tackle the other two!

Oh and happy new years to all of you!
Posted by Micah at 1:55 PM