I spent a lot of time figuring out what vehicle I wanted to use for the conversion.  I had three criterion to begin with: it had to be cool, it had to have a manual transmission, and it had to have 4 seats.  My original thought was to get a mid 90's Mustang convertible since I loved those when I was in high school.  A little research and some calculations led me to realize that the 3500 lb weight of that vehicle would not be very quick to accelerate.  This led to a new desire that it should be lightweight.  Most of the vehicles out there are close to this weight, so most vehicles will be a little sluggish unless you put a lot of money into the power system.

In addition to the hit you take on acceleration, it hurts you in power consumption.  If you do a lot of stop and go driving, this is by far the highest influence on your battery pack size since energy required to get the car moving is proportional to weight and you are constantly wasting this energy every time you hit the brakes.  A 2500 lb car will get approximately 40% more range than a 3500 lb car under identical stop and go driving conditions.  Another energy factor to consider is rolling resistance.  You know how it's harder to ride a bike with flat tires than really pressurized tires?  Increased weight has the same result in drag.

The next train of though revolves around a Datsun 510.  These cars were popular in the 70's a very fuel efficient, and later became popular in drag racing due to the space they held under the hood.  The fastest electric drag racers was made from one of these (look up White Zombie).  I found an ad for the 510's predecessor, the 411.  It's even ligher than the 510 at around 2400 lb, surprisingly easily seats 4 (just watch the old Mission Impossible episodes and nearly every one of them has one of these cars with 5 people packed into them) and has a cool retro look to it.  When I actually saw it in person I didn't fall in love and the search continued.

The next train of thought was a BMW 3 series convertible.  Very cool, 2900 lb, and easily seats 4.  After quite a bit of looking I never found the right one for the right price show up on craigslist.  Everyone wanted $3000 for one of these 20 year old cars.  I never saw an "ideal" non-running convertible in a few months of looking.

After some time I was turned on to the Porsche 924.  It has a very small back seat, which is okay since my girls are still very small, it weighs 2480 lb with an empty fuel tank, and it's definitely cool.  This is one of the lightest production vehicles out there that still has 4 seats.  Another benefit to this vehicle is it has a manual steering gearbox.  Implementing an electric power steering pump is expensive, somewhat complex, and adds another load on the system to drain the batteries.  It also has a surprisingly large amount of space to fit everything I'll need during the conversion.  Right around Thanksgiving of 2011 I found a 1977 Porsche 924 that had bad compression (even though the engine ran) and bad brakes.  The deal was right so I picked it up.

Some other interesting info about this car.  It has a very low CdA (coefficient of drag x frontal area) of 6.96.  This reduces the amount of power required to overcome aerodynamic drag. 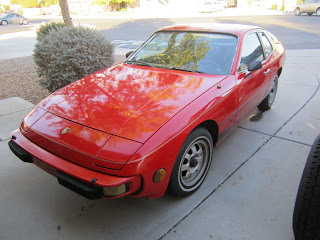 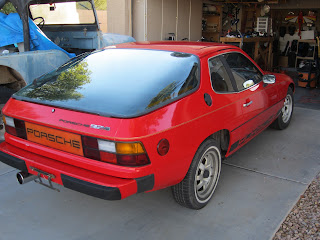