The last post I told you about the coupler I designed.  This next section is how it was made.  As an engineer, I have a lot of experience putting lines on a paper.  Turning that into a real object is an entirely different thing.

The only way to make this kind of part is on a lathe.  My friend, Larry, graciously let me use his lathe and provided all the advice and help I needed to get it done.  Here's a picture of the setup he has, plus a reminder of what the part looks like that we're making. 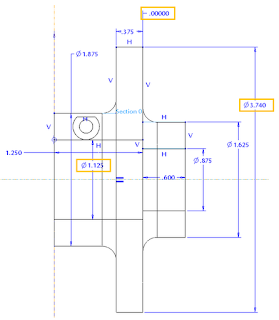 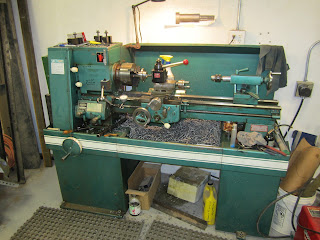 The first tidbit of info is that stainless steel is easier to machine than low carbon steel and easier to get a good, smooth, surface finish.  The same goes for aluminum.  I didn't want to make my part from aluminum for a couple reasons, and had already bought a big block of cold rolled low carbon steel.  Oh well. 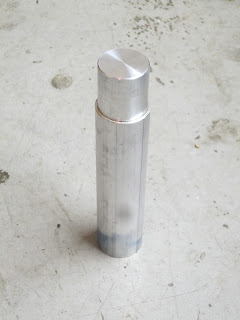 We started by making a dummy shaft that's the same size as the motor shaft that the coupler fits on.  Since the motor weighs 150 lb and is pretty big, it's a lot easier to test fit this piece instead of the motor.  The final pass put the diameter within 0.0002" of the motor diameter.  If I accidentally oversize the hole that the motor shaft goes in by just a little bit, it'll be game over and try again, which will be tough to swallow since it's the last dimension we'll cut. 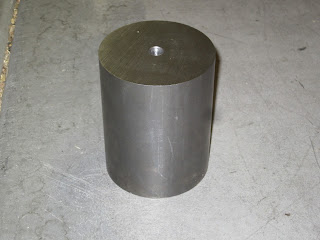 The remainder of the 3 hour first day was spent cutting my 4 inch diameter by 9 inch long bar of steel in half, aligning it to minimize runout, and machining a center on one end.  A lot of that time was spent just thinking of how small we could cut it and still be able to machine all the surfaces in the right order.  Here's a picture of what the part started out as after being cut in half, though this is actually the half we didn't use.

Ok so the plan of attack is to rough cut all the dimensions, but leave a little extra material for later.  The reason for this is after extended periods of heavy cutting, it's possible that the part will move in the chuck.  If you do a precision cut of one surface and the part shifts, you will no longer have the concentricity or perpendicularity that you need.  If you do all the finishing cuts, which are lighter loading on the part, you will have a much better result.

The next day we spent another 3 hours machining just one feature.  You can see the 1.675 diameter on the right side of dimensioned picture (above), I spent the whole evening knocking down that diameter.  Instead of being 0.600 inches long it’s more like 2.5 inches long.  We had to make it that long so the chuck could hold it well and still fit a tool between the chuck and the .00000 surface in the next setup.

The next day we met, we spent another 4 hours and made a lot more progress.  The part was flipped around so the chuck is holding onto the 1.625 diameter.  First I faced off the end (left side in the picture), then hogged out the 1.875 diameter on the left side.  Third we bored out the 0.875 diameter.  It was surprisingly quick to make a ¾ inch hole 2.5 inches deep in a piece of steel.  Now that 80% of the material was gone it was time to retighten the chuck and make some final cuts.  The 0.875 diameter was opened up.  Then the .00000 face was skimmed off.  Then the 3.740 diameter was cut.  I had the flywheel there, so we were able to check that it was a tight fit.  And that’s where we stopped for the night. 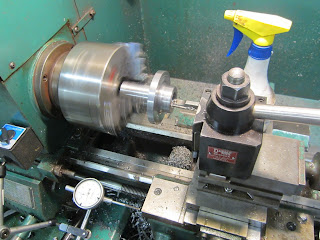 Finally we're to the last critical dimension, which is the hole that the motor shaft fits into.  You can see me cutting that dimension in this picture using a boring tool.  Being in inner dimension, it is tough to get a good surface finish and tough to check the diameter accurately.  You can use a micrometer, and unless you have some really specialized tools you can only use calipers to measure down to 0.001" accuracy.  That's where the gauge pin I made earlier helps out.  Once the hole is nearly large enough, you run the tool in repeatedly without changing the radial position.  This skims off more and more of the high spots on each pass and the hole will slowly get bigger.  This happens because the cutter is somewhat V shaped, so it leave small grooves.  On the outside dimensions I used a flat tool for the final cuts, so you don't see much of this behavior.  After taking a long time to close in on the final dimension, the gauge pin is very tight, but fits.  Here you can see the final part and a few pictures of it installed on the motor and the flywheel.  The next step will be to have the keyway broached at a machine shop. 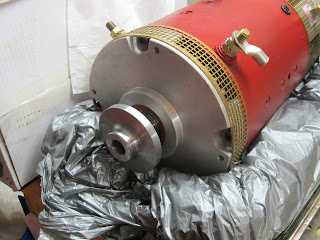 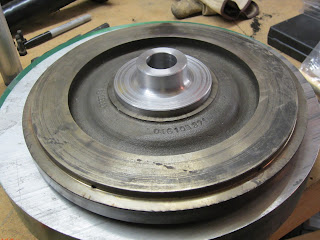