The good news is the motor is finally installed in the Porsche and supported on it's own brackets!  Bad news is that something I hoped never would happen has happened.  During the monsoon season, a batalion of black widow spiders have moved in to lay claim to the undercarriage of the car.  I managed to blast a few with brake cleaner and clear out all the webs, but I'll have to check back soon to see who made it through the first assault.

I didn't realize how long it was going to take to make this motor bracket.  The biggest issue is it involved putting the motor in and out and in and out to constantly keep checking dimensions, tacking parts together, etc.  Here it is installed in the car before I painted it.  You can see how careful I had to be of clearing the steering shaft, but I think I have at least 3/8 inch. 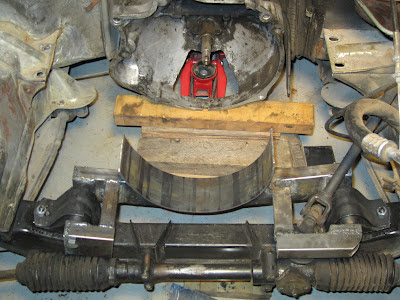 The next project was to finish up that flywheel adapter.  I never got around to making a pilot bushing, so now's the time since I can't put the motor in until that's done.  I bought a slug of phosphor bronze off ebay for a couple bucks and tackled it with the mini-lathe.  This is the perfect job for this little lathe.  I didn't realize that bronze turns to dust when you machine it, compared with curling off of aluminum or steel.  It's a lot easier to sweep up, you just have to try not to breathe it. 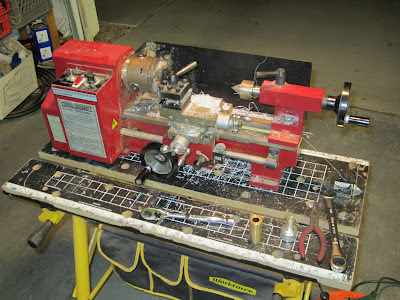 Here are the parts.  On the left is the flywheel adapter, in the middle is the bronze slug, and on the right is a tool I made to mimic the transmission input shaft. 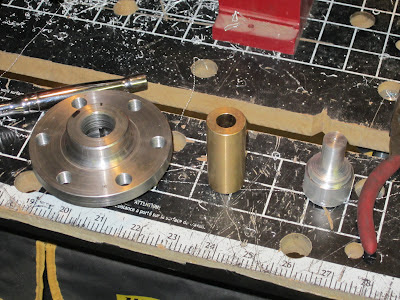 Here I've got it all chucked up and squared off.  I figured the ID would be the toughest part to do so I did that first.  As it turns out, the OD was a little harder.  It's supposed to be a light press fit into the coupler, and since an inner diameter is difficult to measure accurately without special tools, you're left to doing a lot of checking.  A good way to do it is to cut a short distance off the front until the part it fits in just barely slips over, then you know the rest needs to be slightly bigger. 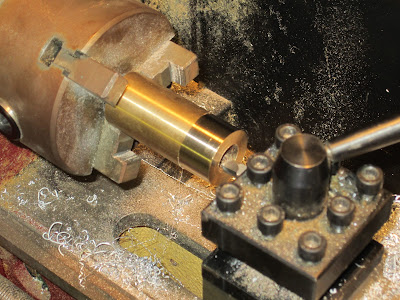 Ok, the tool fits pretty good now.  I wasn't sure how loose or tight to make it.  You want it to do its job piloting the input shaft, but you also don't want it impossible to put the motor in.  Someone online was suggesting 1/32nd inch diametral clearance, but 0.032 inches seemed too much.  I think I ended with about 0.012 inches diametral clearance.  0.006 inches off center ought to be okay I think, and it was not easy or impossible to get the motor in later...just right. 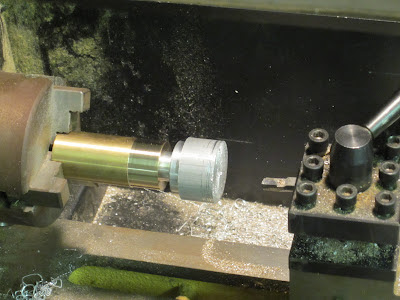 The first try turned out to be a bust.  I must not have been paying attention and when I checked the fit in the flywheel adapter and it just barely slid in, but I'd machined the whole length of the bushing..  Since it's supposed to be a press fit, I'm hosed and have to try again.  Luckily I ordered enough bronze to get two tries out of it and I now I have a better starting point for the OD.  After slicing the end off, I machined the next one 0.0015 inches larger than the last and it was just right.  Here it is pressed into the adapter. 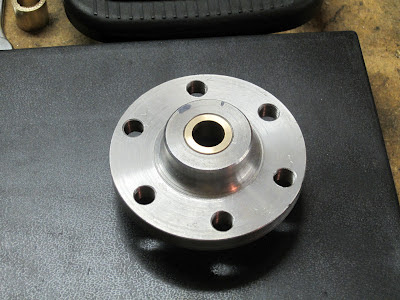 After this was done I mounted it on the motor and attached the flywheel.  A while back I'd rotated it around until I got the least vibration and marked it so I wouldn't forget later.  I also noticed it wasn't quite spinning flat, so now's the time to figure out what the problem is.  I bought a depth gauge and set it up to check the runout on the face of the flywheel.  If you don't know what that is, the total runout is how far up and down the surface goes when you spin it around (think of a warped record).  It turns out there was a 0.018 inch wobble from the highest to lowest spot.  Some quick action math tells me I need to put a 0.004 inch shim behind two of the bolt holes to fix it. 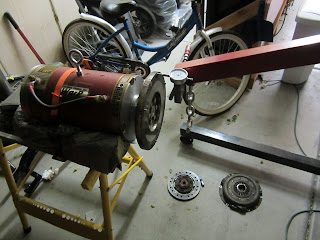 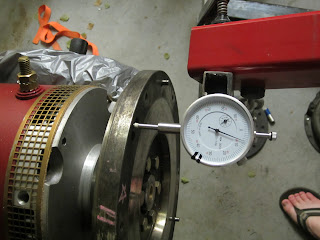 Unfortunately, precision shims cost a whopping $25 for a pack of 10!  My 7 year old daughter reminded me that a soda can is like paper thin metal so I cut one up and found it's 0.0035 inches thick.  A lot cheaper, and I don't have to wait a few days for shipping.  I shave one to shape and fit it in there and now the runout is reduced to only 0.004 inches.  Good enough for me.  Next I hook up the pressure plate and see how the balance is.  It has three piloting pins, so three position options and there's definitely a preferred position.  I was surprised to see that some of the screws that were missing lockwashers were causing noticeable vibration.  With all the right pieces in place it hardly shakes at all!  Time to tear it all down, add loctite, lockwashers, and new fasteners to everything and put it all back together with the clutch disc.  A final spin up and I'm ready to put the motor in the car (hopefully for good).  It's a little more shaky after the rebuild, but it's not significant and hopefully it's just due to an imperfectly centered clutch disc. 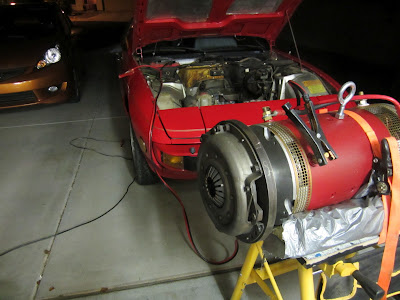 I'm sure there will be plenty of time for a picture of the motor sitting in the car, and since I don't have on at the moment, that's all for now!  Next up will be making the clutch cable bracket and mounting the air conditioning compressor.  After that I need to make a shopping list of all the relays, contactors, potentiometers, fuses, shunts, DC-DC converters, etc. that will need to start filling the engine bay and get them on order.