That's right, it's payback time!  I've broken 3000 miles and instead of doing my first oil change I'm going to add up all the payback I've made so far from this car project after bleeding into it for two years.

We'll start with mileage.  I've driven about 3200 miles so far, and when you compare the cost of electricity to the cost of gas, I save $0.205 for every mile I drive when compared to driving my Jeep Cherokee.  So that's $656 so far saved in gas!  Not too shabby.  There are a few people who've turned their nose up at the prospect of saving money with an electric car, but let's think about it.  The real thing to compare is what's being consumed that's different between the two cars.  In a gasoline powered car, you pay for gas and oil.  Gas currently costs about $3.50/gal, and at 16 mpg in my jeep, that's $0.219/mile.  If you spend $30 on an oil and air filter change every 5000 miles, that's another $0.006/mile.   In an electric car you pay for electrons and eventually your batteries will need to be replaced.  I pay $0.08 per kWhr and consume an average of 250 Whr per mile.  So that costs me $0.020/mile.  The battery pack cost about $5500, so the break even point is when I drive 26,830 miles.  According to the literature, if taken care of, these batteries should have 80% of their original capacity after 2000-3000 discharge cycles.  In my 3200 miles I've recharged the batteries 132 times, indicating I should get 50-75,000 miles of use out of the pack.  And even then my range should still be enough to get me to and from work.  If I assume the price of gas doesn't go up in the next 5 years, I should still at least break even if I compared my car to one that got 32 mpg.

In addition to the fuel savings, I've had a few unexpected perks from work.  I won a contest for "commuter of the year" worth $50.  And I also have scored a free covered parking spot for driving an alternative fuel vehicle two years now.  Those spots go for about $400 each, and worth every penny during the summer when you can hop into a relatively cool 115 °F car rather than one in the sun at a blistering 150 °F!  (not a joke)

Speaking of blistering heat, last time I was talking about getting my AC running.  I had to mount a few fans to the condenser, install a new receiver/drier, mount the compressor, and wire it all up.  And I'm glad to say it all went pretty smoothly!  Except that the fans didn't want to fit, the receiver/drier had the wrong fittings because it's an aftermarket AC system, and the compressor...well, that actually was just fine.  Luckily the weather decided to stay in the 70s and 80s for a couple more weeks and I got all this done.

Here's the compressor and the third belt I bought that finally fit. 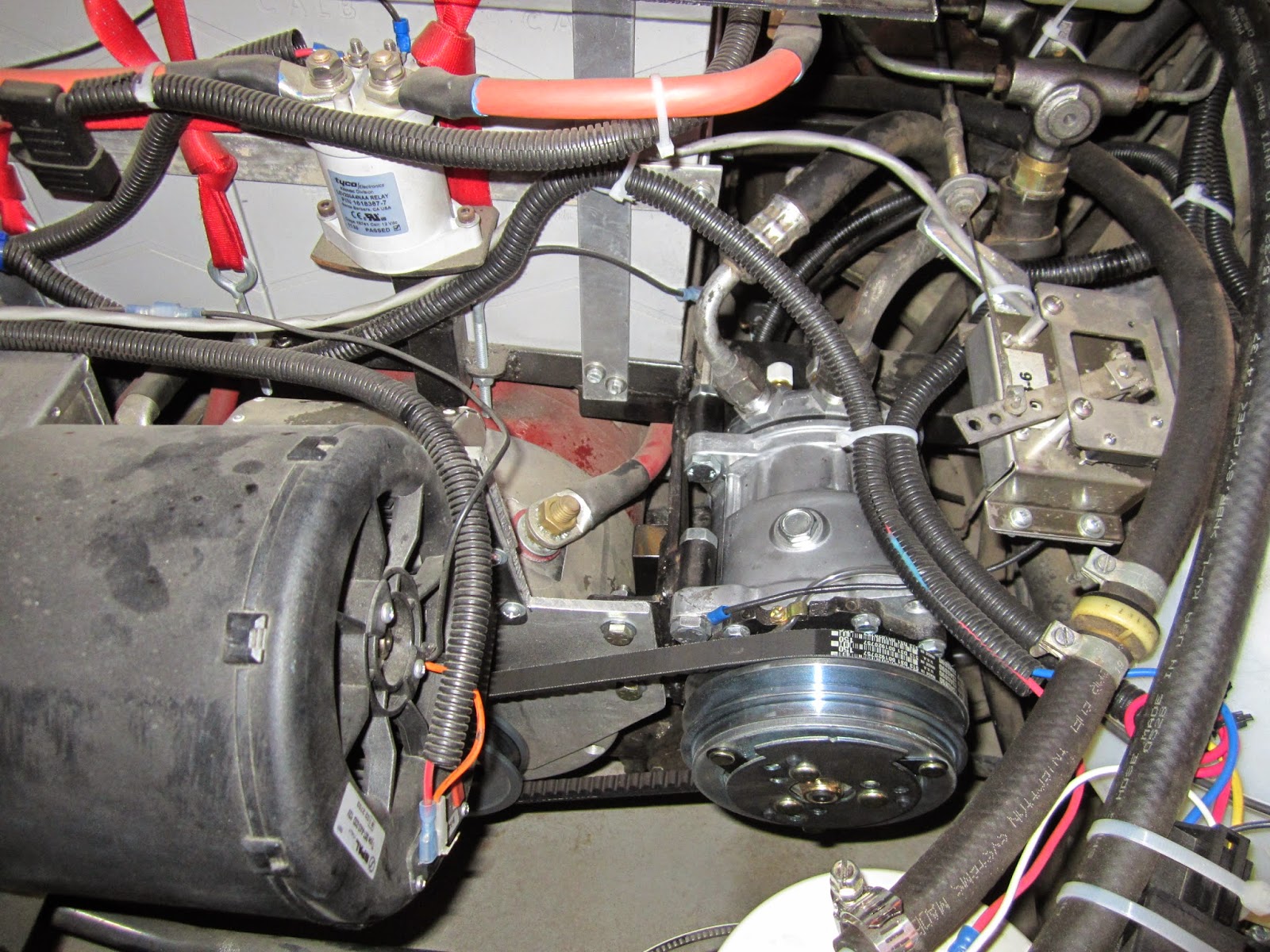 And here are the two condenser fans. 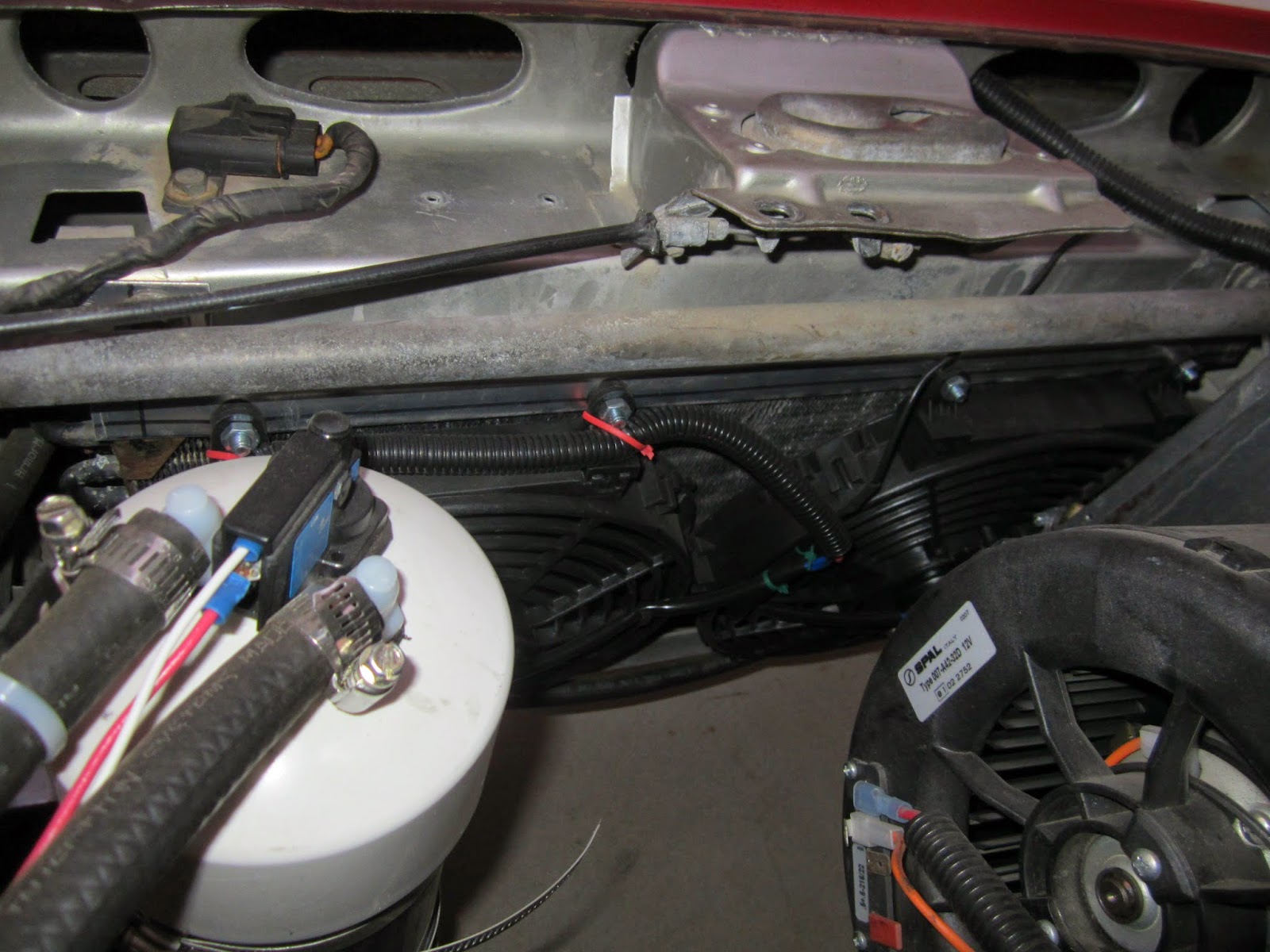 Last step is to charge it up and see what happens.  I've never done this, so I refer to my friend, Ed, for help.  To start, I'm not doing this the "correct" way.  As an engineer and a cheapskate, I like to do things just well enough, so I keep the whining to yourself if you want to tell me all the things I did "wrong" here.

Before you do anything, you need to get all the lines flushed out.  Well, I've already got a problem here because you're supposed to flush each component individually and you can't flush through the expansion valve.  The expansion valve on my car is buried so deep that I couldn't even get to it with the dashboard removed.  I decide I'm not gonna flush the evaporator or those lines, I'll just do the condenser.  Now, you're also supposed to use a special AC system solvent that will clean out any oils completely.  I'm sure those work great and all, but it's way easier to hook a hose to it and blast everything out that way!  A little compressed air and it all comes out.

Okay, the system needs a certain amount of oil in it.  I'm not sure what exactly the oil does, but I think the main function is keeping the compressor lubricated.  It spreads itself throughout the whole system, so you need a certain amount for the compressor, and another certain amount for the rest of the volume of the system.  Unfortunately, I can't figure out how much my specific, special, aftermarket system needs, so I guess it's about 6 oz.  There are also a number of different types of oil you can use.  The old R12 systems use mineral oil.  My plan is to switch to R134a, which typically uses an oil that is completely incompatible with mineral oil.  Since I didn't flush the whole system out, there's bound to be some left, so I use ester oil, which is supposed to be good for that.  There are all different opinions on where in the system you should put the oil at first, and there's a really convenient drain hole on the top of the compressor (to drain the shipping oil) that's just asking for me to fill it.  Of course, when I start pouring the hole is too small to pour fast so oil spills everywhere.  And now I really have no idea how much oil I've put in.  So it's a good thing I had no idea how much to put in in the first place because it really doesn't make a difference!

The receiver/drier's function is to filter the refrigerant and absorb any water in the system.  Because of the water part, you can't take the caps off until you're ready to charge or it'll quickly fill with moisture from the air.  I wait until the morning of, and of course I have problems getting it hooked up.  The current style fittings are all o-rings.  The old style fittings are flared fittings (what I have on the compressor).  And the really old style is barbed fittings.  The barbed fittings are supposed to have these clips that keep the hose clamps from blowing off under pressure.  The hose clamps have the clip, but the drier doesn't have the tang that it grabs onto.  Oh well, what's the worst that can happen?  They'll just blow off if the pressure gets too high right?

I'm not sure who's bright idea this was, but the drier is located in the front passenger wheel well. Next step is the old R12 fittings should be replaced with R134a fittings.  Of course, the high pressure fitting doesn't fit on this compressor.  But luckily the low pressure fitting does.  Ed has all the connections you could want with his gauges, so no problems there.  After that you put a vacuum on the system.  This does two things.  First, you can see if it's leaking if you can't get the vacuum down low enough.  And second, it evaporates any water in the system, which I assume is bad for the compressor and could create vapor bubbles if it turns to a gas.  The vacuum drops quickly to 30 inches of mercury, so that's good, and we keep it there 30-40 minutes.

Now's the moment of truth.  Is it going to work or not?  We prime the system and spin up the motor.  Once again, we don't know the size of the system so we don't know exactly how much refrigerant to put in.  After running it a while, the high pressure is good, but the low pressure side is reading low.  Apparently this indicates a stuck expansion valve.  I'm not exactly sure what the expansion valve is doing, but here's the quick story on how the system works.  The compressor spins and compresses the freon, and in the process, the freon becomes hot.  After this, you want the freon to be as cool as you can get it, so it passes through the condenser.  That's the thing in front of your radiator, and one or more fans blows over it to try and get it down to ambient temp.  Then this medium temp, high pressure freon travels to the expansion valve.  The valve is a big restriction in the system (like if you pinch off a garden hose) and the pressure just past the valve is low.  According to the laws of thermodynamics, the temperature has to drop significantly when the freon goes through this rapid pressure drop.  Now you have very cold freon that goes through your evaporator that looks like a mini radiator.  The fan inside your car blows over the cold evaporator, the air becomes cold, and if you're lucky, it's cold enough that you don't sweat your balls off on the drive home from work.  The freon is warmer now and returns to the compressor for another go around.

So this expansion valve is a variable orifice that (I think) changes depending on the flow to try and get something near 30 °F coming out.  The pressure on the low side on mine is lower than it's supposed to be, indicating the restriction is too high and the freon is "too cold" when it comes out.  The only real problem here is that you will be prone to having ice form on the evaporator.  Lucky for me, it's dry heat right now, so icing probably won't happen on my 20 minute commute.

After looking at the gauges for a while we hop in the car and realize it's freezing inside, though it was only about 75 degrees outside at the time so it's not a fair test.  But luckily it was still nice and cold a week later when it was 95 out, and hopefully it'll stay that way when it's 115.

Well, you've wasted another chunk of your life reading my blog that you'll never get back so I'll finish it up for now.  So long and good luck staying cool!