Charger Part 3 Plus Other Stuff

I'm moving along pretty fast now and the next thing I want to do is get the batteries charged before I mount them in the car.  Once they're in the car, it'll be a lot more difficult to do without the big charger, and most of them are not balanced.  Here are the remaining 46 batteries hooked up to the mini charger.  Just 30 hours and they should be ready to go! 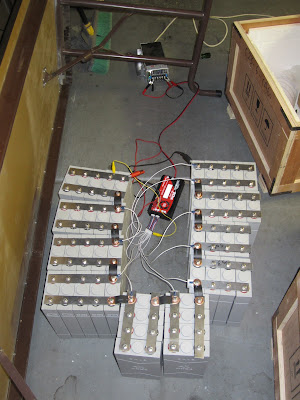 The batteries already in the car have already been balanced as a set, so I can charge them all at once if I have a charger big enough to do that.  Last time I started smoking the charger due to a short circuit through the inductor's magnetic field that created an inductive heater.  In this picture you can see the metal bracket that holds the inductors in place loops right through them and the screws complete the circuit with the case.  It's gotta go! 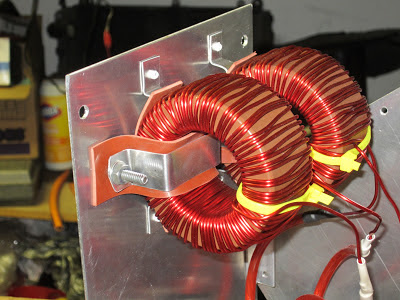 Here you can see my solution.  I've taken a plastic pipe and used it to hold the inductors in place.  All fixed, at least I hope so! 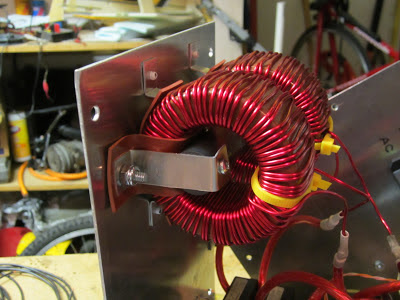 I realized I ever showed a full picture of the charger, so here it is.  Due to some rework, the "Batt" and "AC" labels are unfortunately backwards. 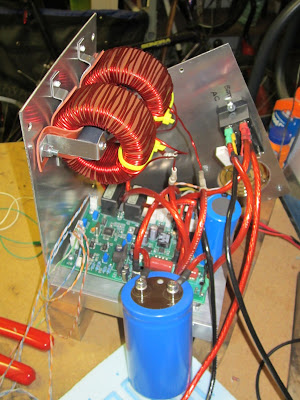 The big capacitor is one of the few remaining parts to be strapped down in the charger, and here's how I plan to do that.  You can also see the fan that'll blow directly onto the inductors to keep them cool. 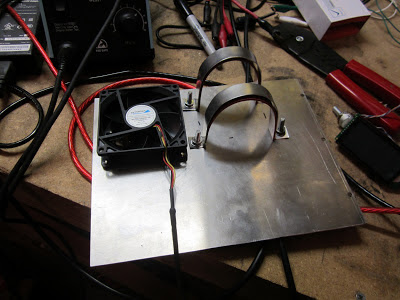 Apparently after this I didn't take any pictures, so you'll have to take my word for it.  I hooked the charger back up to the car and plugged her in.  After a few minutes charging at 2 amps, still no smoke so I ramp it up a bit.  Over the course of 20 minutes I get the courage to boost it to 7.5 amps into the battery pack and so far so good!  The inductors are a little warm to the touch, but not bad.  Should be better when the fan is blowing on them.

The way these batteries work, they are close to 3.3 volts over most of their charge/discharge cycle.  During charge, the voltage will get up to 3.37 volts for ages.  As they approach a full charge, the voltage will start to rise faster and faster.  Since I have no BMS hooked up, if one of the batteries happen to be more charged than the others, the voltage on that one will start to rise while the others are still stalled out around 3.37 volts.  To avoid having some batteries start smoldering, I was checking to voltages every minute or so.  The charger is programmed to raise the entire pack voltage to 3.45 volts per cell.  Once it gets to that point, the charger will back off on the current to maintain that voltage.  The current will slowly decrease and the charger will turn itself off after it drops to 2 amps.  Amazingly, that's what happened!

So that's not even close to how far I've gotten on the car since last time, but I've been picked away at this post for 3 days so it's time to POST!  Maybe next time I'll be testing the car on 230v...
Posted by Micah at 6:43 AM