Last time I was working on doing wiring on all the batteries.  I'd run out of time to finish it before our friends Toni and Warren visited us from Germany.  But between beers and while the girls were playing video games, Warren and I snuck out to get a little work done.  We started by finishing the routing of the 2/0 cables.  I got the cables securely tied up under the car so there's no chance of a stray stick snagging it.  Warren is sitting here with a phone in his hand.  He punched in 9-1, and if the car falls on me he'll just have to hit 1 again. 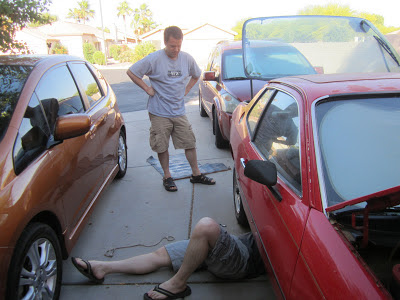 After finishing the large cables, it was time to finish the small wires.  You can see all the BMS wires are hooked up in the front and we got all the connectors pinned out.  I also wired up the the B- contactor and the vacuum pump. 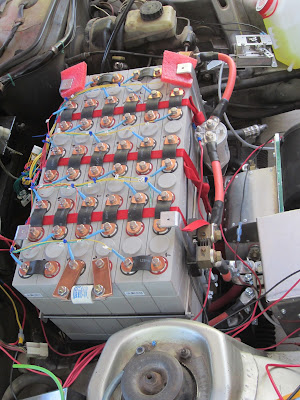 Here's a close up of those connectors I keep mentioning.  There are three that plug into the BMS boards.  I'm also using them to initially top charge the batteries. 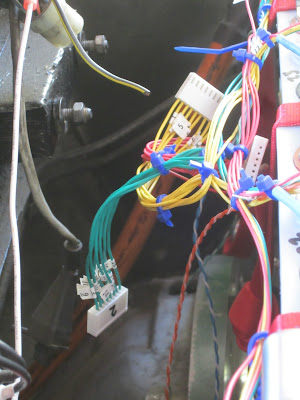 Here are the two clusters of wires coming out the back end of the car.  Finally the spaghetti of wires are neatly bundled into wire looms and all fitted into connectors.  Now I just need to drill a hole into the cargo cubby hole that's behind the wheel well  and stuff the wires in there. 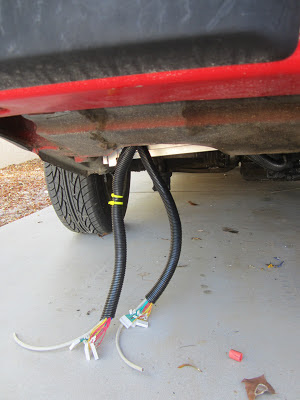 Alright, what's next?  Hmm, can't think of anything else that needs to be done...I guess it's time to test out that controller again!  Just a reminder, I've driven the car about 3 miles on 1/3 of the battery pack.  That's about 80 volts.  Well, a lot of the reason for the custom controller is that I wanted to run higher voltage than 150v, so I really haven't proven anything yet.  An 80v 300 amp controller is pretty common out there, but a 230v nominal controller, that's special and seems to cost $2400-$3800.

Well, no more lollygagging, let's see what happens.  I flip the manual disconnect and that connects the positive side through the precharge resistor.  Next I flip the ignition to engage the B- contactor and that closes the loop and allows the capacitors to charge up.  If something blows, the voltage here probably will be less than the pack voltage, but since the 1k ohm precharge resistor is the only path for current to flow, the current is limited to 1/4 amp and the damage can be minimized.  Once that's bypassed by closing the contactor, the controller determines the amount of current, and if that fails closed it'll be a couple thousand amps.  Booya, 235 volts!

Okay, don't get too excited, it's possible that something still hasn't surfaced yet.  I opened up the manual disconnect and discharge the capacitors by pushing the pedal.  0 volts, so that checks out.  I decide to redo that cycle a couple times just to make sure there's no problem with the caps charging and discharging with no problems.  In the pic below I had opened the manual switch for a while and the voltage reading actually drained the charge a bit to 231 volts.  So now for the real test.  At this point I also hit the "start" button to close the B+ contactor and remove any limitations on battery pack current other than what the controller does.  I put the car in neutral to avoid a runaway and push the pedal... 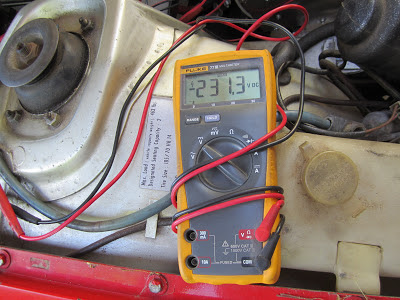 Aaaahhhhhhhh!  Oh the humanity!  At least I've got insurance now. 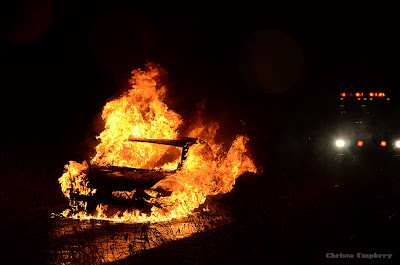 Just kidding...the motor just spun like it's supposed to.  Though the picture above represents some of the nightmares I've been having over the last couple weeks.  Here's what the car really looks like now.  After slowly working my way up to it, I drove a whopping 0.1 miles to pick up my daughter from a friend's house and successfully made it home!  Woo hoo! 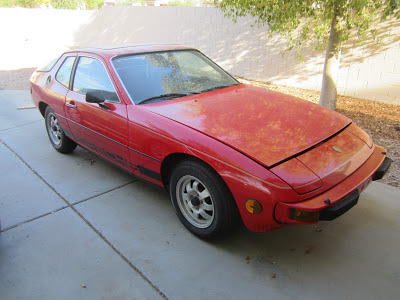 Next up, time to start installing instrumentation and get ready to take it to the DMV!
Posted by Micah at 9:24 PM