Previously I've been driving the car around on just 1/3 of the batteries, or about 80v, but now it's time to put the rest of the batteries in there.  In the back of the car below the floor I have two battery racks that hold 23 cells.  Actually, they're big enough for 23 each, but I only bought enough for 23.  I guess if later on I want 2/70ths more range I can buy two more cells.  At any rate, the way the batteries are tied down, I can't just leave that empty space open so I need a battery "blank" to fill it in.  My father in law has a ton of scrap wood and woodworking tools, so he helped me put a pair of these together. 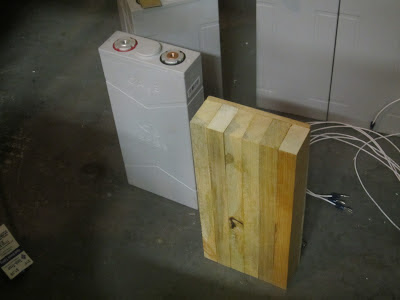 As part of the battery monitoring system I added the capability to monitor the temperature of the cells, three spots in each cluster of batteries.  To do that I've got some thermistors, which are resistors that vary resistance as a function of temperature.  Here's one of them soldered onto a wire. 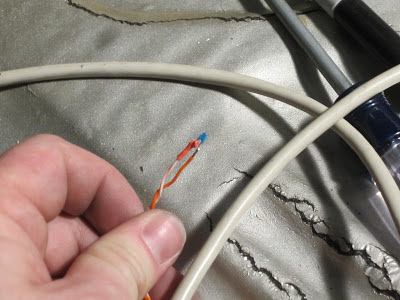 Apparently there's a lot of debate of how to "properly" monitor the temp of your cells.  Some people attach the thermistor to the posts on the cell since they're wetted in the electrolyte.  Other people using lead acid batteries will actually put the thermistor inside the battery so it's directly touching the electrolyte.  I'm going simple and just taping it to the side of the battery like this. 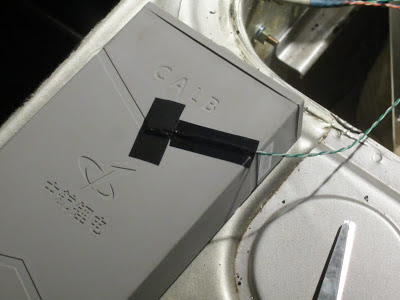 Then I loaded all the batteries in those nice racks in the back and clamped and strapped them down the same way I did with the front batteries. 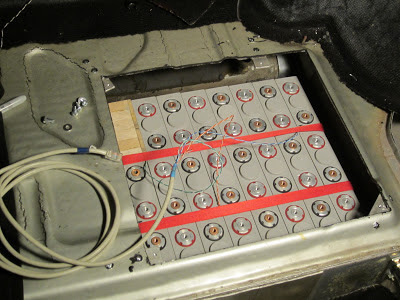 Pretty clean look from underneath.  You can see the threads on the four eyebolts that are really easy to access here.  Too bad the aluminum clamps are super difficult to get to, but oh well. 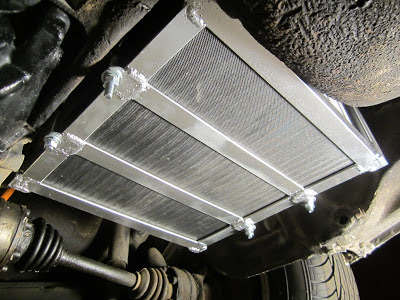 Well that's it for now.  This weekend I'll start wiring it all up!